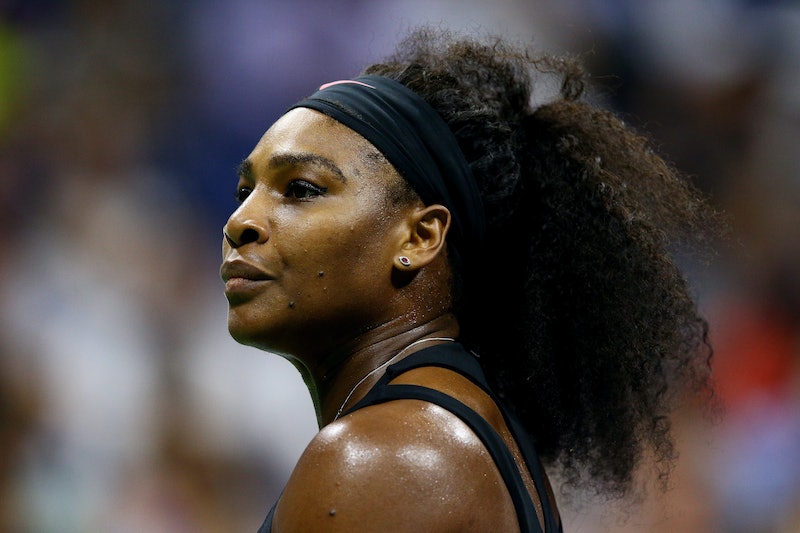 Serena Williams might be tennis legend and a goddess in our midst, but it seems she still get asked the same inane questions we mere mortals do. At a US Open press conference, a reporter asked Serena Williams why she wasn't smiling — and her response is absolutely perfect. What else would you expect from Serena?

I don't know why it is that so many men seem to think telling women to smile or asking us why we aren't is somehow valid. Do they think that women's natural state is to be happy and bubbly? In this case, it was at least this reporter's job to ask Williams questions, though it's unclear why he ventured into "why aren't you smiling?" territory instead of sticking to tennis. He could have asked if she was tired, or just asked how she was feeling, but going on about how she isn't smiling and wanting to know "What's wrong?" perhaps wasn't the direction he should have taken things.

Press conferences following a match are mandatory at the US Open for USTA players, even if it is 11:30 at night and they've just played a physically taxing quarterfinals match. Players who do not attend the events are heavily fined. When Williams and her sister Venus skipped a press conference after a French Open doubles match in 2010, for instance, they were each fined $4,000. Other stars who have skipped have received even steeper penalties. When Andre Agassi skipped a press conference following his defeat in the 2000 French Open, he was fined 6,000 British pounds, around $8,500 at the exchange rate at the time.

In other words, it doesn't matter if you're exhausted — you had better show up. Even if the questions are the same ones you've answered a hundred times before.

After explaining that she had to wake up early to practice the next day and that she would really rather be in bed instead of at the press conference, Williams went on to tell the reporters, "And I don't want to answer any of these questions. You guys keep asking me the same questions, so ... you're not making it super enjoyable."

And at that, she did crack an amused smile.

"I'm just being honest," she says with a laugh.

You can check out the full clip below. Use it to remind people that women aren't under any obligation to act happy or cheerful when they aren't feeling like it. Because we are human, too, even the tennis legends.

More like this
Why You're Seeing Green Bandanas At Abortion Rights Protests
By Lexi Inks
How To Come Out Online, According To Trevi Moran
By Melanie Mignucci
Freddie Flintoff’s Wife Has The Cutest Nickname For The Famous Cricketer
By Frances Stewart
Watch Emma Raducanu’s Incredible Response To Her Early Wimbledon Exit
By El Hunt
Get Even More From Bustle — Sign Up For The Newsletter