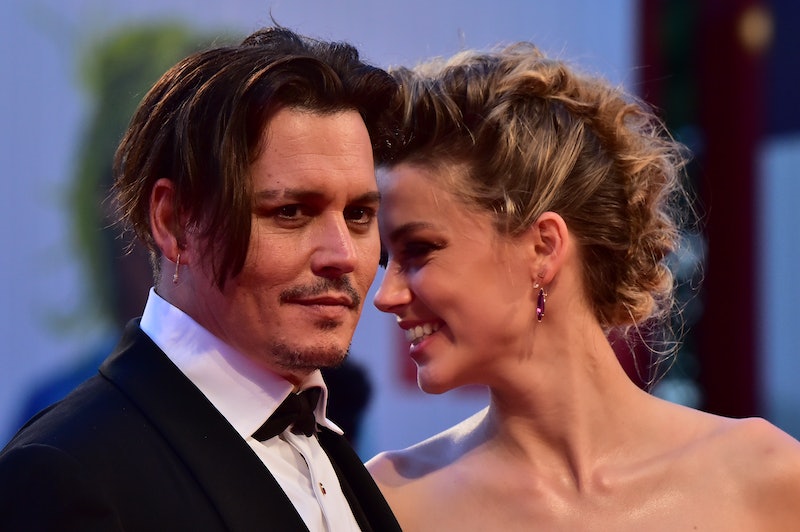 On a recent Jimmy Kimmel appearance promoting his latest Black Mass, Johnny Depp joked about taking his wife Amber Heard's last name. Some context: Depp was speaking to Kimmel about the fact that he doesn't know anything about the last name Depp or where it came from. Kimmel noted that Depp's twice-married wife Amber Heard did not take Depp's last name. The actor joked that he might take Heard's last name, which Kimmel replied to with a skeptical laugh and a "that would be a weird thing."

Kimmel's response strikes me as strange, as the real weird thing is that women are still expected to give up their names for the men they marry. And it's not so strange for men, including male celebrities, to take the last names of the women they marry. Quite a few men have taken their wives names, sometimes for practical reasons, but often for the feminist cause of questioning the assumption that a woman must give up a part of herself in order to be married. While a woman should be allowed to take her husband's name if she chooses, it should be a choice, and not laughed off as weird if a man wants to make that choice instead.

While the couple and White Stripes bandmates are now divorced, Jack White changed his name from Jack Gillis when he married Meg White in 1996 and has kept that name.

Director Marco Perego caused quite a stir when he took actress Zoe Saldana's last name, though he apparently told his wife that he didn't give a s**t about the potential emasculation.

When the lead singer of The Faint Todd Baechle married Azure Ray musician Orenda Fink, he took her last name.

While best known as Jay Z, the rapper reportedly added wife Beyoncé's legal last name to his own.

The Beatle added his wife Yoko Ono's last name as his middle name, and she did the same for his.

Musician Carlos Pena, Jr. and actress Alexa Vega beautifully combined their names when they got married.

So, Depp and Kimmel, taking your wife's name isn't so hilarious after all, and it even has its benefits. In the modern world we all now live in, the tradition of a woman taking her man's last name shouldn't be an expectation resulting in laughter when it's not followed. It's a tradition that can easily be turned on its head without judgment.