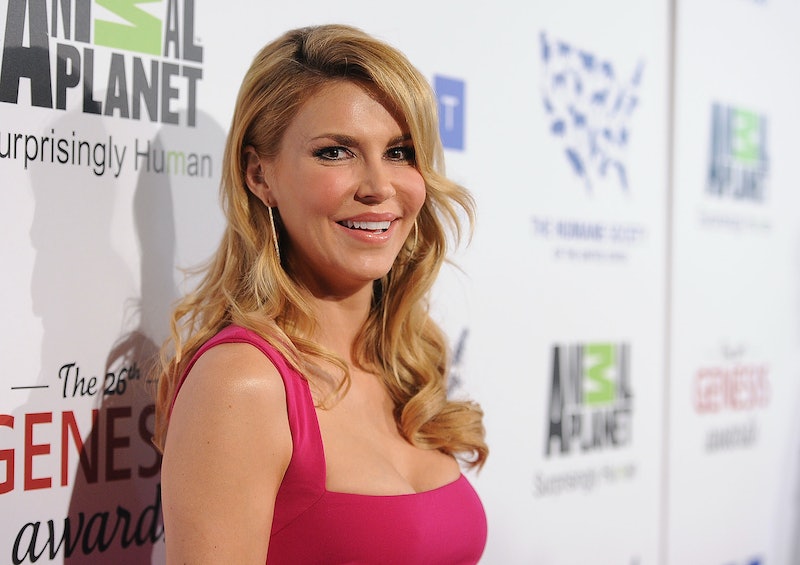 Sometimes the Real Housewives set just gets too real and people leave to never return. And hey, if they didn't like it, all the better for them. I can't imagine what kind of a jungle the environment is filming any of the iterations of the Bravo series. One of the most recent defectors from the franchise is Brandi Glanville who left Real Housewives of Beverly Hills . Brandi left the show after four frenetic and dramatic seasons this year. She was involved in several feuds, including one where she threw a glass of wine on another Housewife. Yikes. But what has Brandi been up to since she left the show? She's been busy entrepreneur-ing and self-caring.

First of all, was she fired or not? It's unclear. The former model and now former Housewife spoke about her decision to leave on her podcast, Brandi Glanville Unfiltered, back in June. "After a lot of careful thought and deliberation I have decided not to return to RHOBH as a full time cast member this season. The past four years have been amazing, a complete roller coaster of a ride. I will always be thankful to Bravo for the opportunities that have come along with doing this pop culture phenomenon of a show," she said.

Whether or not that's the real story remains vague though. E! reported that sources confirmed Brandi would not return for Season 6, saying that it was Bravo's decision to let her go from the series because of "bad blood" between her and the other Housewives.

Either way, it seems like Brandi's doing pretty good. She told Wonderwall, "I'm cutting back on my antidepressants. I'm waking up with a smile. There's a stress that goes with it. I dont have that anymore."

She also is surprisingly candid about the business-side of the Real Housewives, saying in the same interview that she felt the weight of the series on her more than the other women: "I feel like I was doing everything for the sake of making good TV whether I was going to be loved of hated. Because I, unlike the other women, needed the j-o-b. Ya know, they're rich anyway."

The 42-year-old been busy lately. On the same podcast episode in which she addressed leaving the show, she said that she had a lot of irons in the fire when it came to personal branding and business:

I'm working hard on my podcast, my new wine business, and my clothing line. And keep an eye out for my next adventure that will show everyone a more well-rounded side of who I really am.

Oooooh, what could that possibly mean? Well, she told Wonderwall that she is going to be involved in a new show, but she didn't dish which one.

If you're interested, you can buy Brandi's wine now! It's called Unfiltered Blonde, which sounds kind of gross when it comes to wine, but I have to give her a 10 out of 10 for consistent branding. She debuted her wine line back in April, and she's been promoting it like wild on her Twitter account. She told Us Weekly that she was involved in every aspect of making the wine, "from tasting to creating the perfect combination of flavors to the name." And the Unfiltered branding doesn't stop there, either: She even has Unfiltered Blonde candles. I hate myself for really wanting to know what they smell like.

The mother of two is also working on her third book. She's the author of Drinking And Dating and Drinking And Tweeting. Maybe the third will be Drinking And Throwing Drinks. She's also been spending a lot of time with her sons, Mason and Jake, who seem like pretty cool little dudes (apparently they all like to go to Color Me Mine and paint ceramics, and I trust kids who enjoy painting ceramics). Brandi is pretty candid about her personal life on her Twitter, so if you want any more updates on the former RHOBH star now that she's not on the show, you can get plenty straight from her!