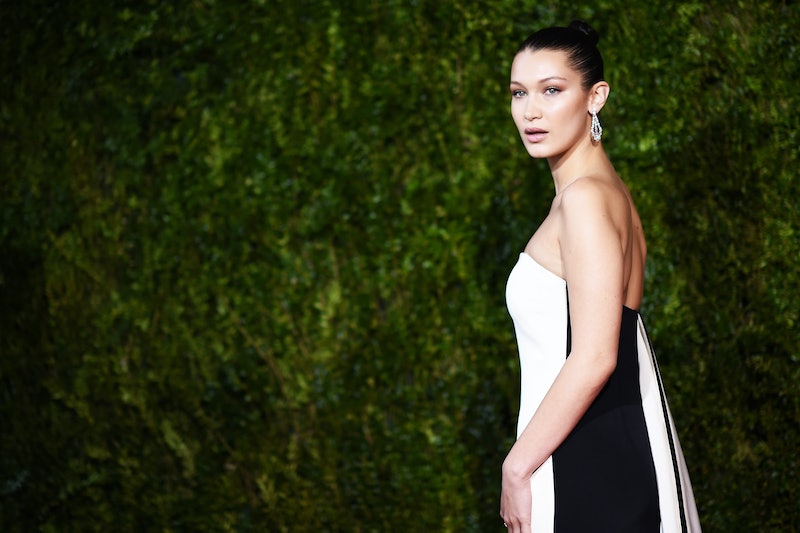 Bella Hadid and The Weeknd finally gave the people what they wanted and allowed themselves to be photographed holding hands in public. The couple stepped out together in New York on Tuesday night to the delight of fans who have been less than satisfied with the rare photos of them so far. Bless! Naturally, they look like two really cool people in really cool outfits that even kind of match: lots of sexy denim. But you might be wondering after seeing them: How tall is Bella Hadid? She looks like she's towering over her boo, but it's all just an illusion.

It's all in the boots, apparently! Hadid is pretty damn tall, standing at 5'10" according to her profile on the IMG Models site. The Weeknd, or as he is known when he's being a mere mortal, Abel Tesfaye, is said to be 5'11" though his hair certainly adds some height to the whole look. And even though in this photo of them together he looks dwarfed next to her, apparently it's just because of their shoe choices. The Weeknd is all about cool comfy sneakers that are decidedly flat, and Hadid, who's on her way to becoming a huge model, is comfortable wearing towering boots on the daily. Some people are just born with natural talents that others of us will never have.

It's kind of surprising that Hadid is shorter than The Weeknd, but maybe she just has a taller presence. She's always got some kind of killer heels on that take her to over six feet and look like they would turn my feet to mush. But I assume IMG Models has the most accurate stats about her since they do her booking, and height is important to modeling, right? Right. Maybe she also looks so much taller than "Can't Feel My Face" singer because she just has better posture than him. My mom would be very upset with your slouching, young man!

After their first outing on Tuesday, they were spotted again on Thursday night. And again, Hadid looks taller:

Now that the pair have finally gone public, we'll probably get more photos of him looking short next to her soon. He could always style his hair higher vertically, if being taller than his girl is important to him, but I doubt he cares about something so silly.

More like this
Why Sarah Jessica Parker Wanted Fans To Stop Calling Her Hair Choice “Brave”
By Brad Witter
Bella Hadid's White Corset Is Bridgerton-Chic
By Dominique Norman
The Secret To Victoria Beckham’s Posh Hair
By Orla Pentelow
The $6 Drugstore Beauty Product Taraji P. Henson Uses Every Single Day
By Danielle Sinay
Get Even More From Bustle — Sign Up For The Newsletter