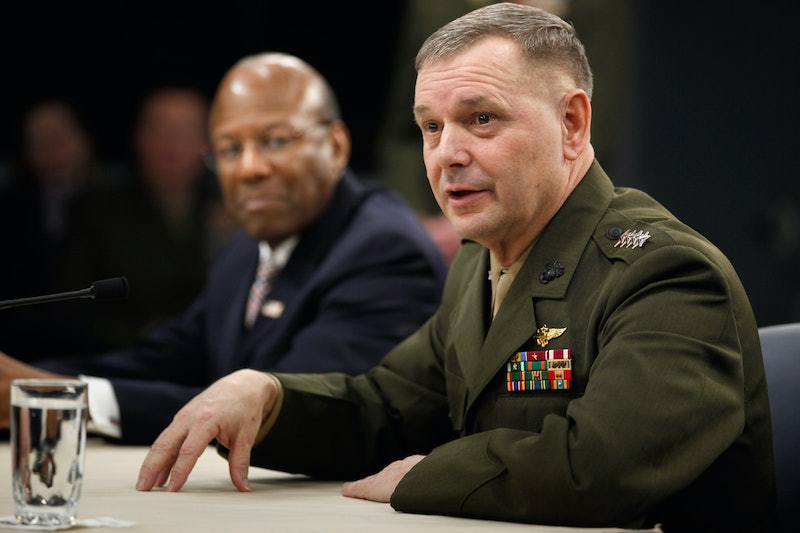 Another day, another top-secret government operation gone awry due to government officials who just can't keep their mouths shut. This time, the fuss is about a long-term and highly secret U.S. cyber blitz against Iran's missile program, which was leaked to The New York Times a year ago.

And the guy the government believes was responsible? Not a relatively low-level official like Edward Snowden (cough, egotist, cough), but the military's now-retired second-in-command. His name is James Cartwright, and until 2011, he served as the vice-president to Joint Chief of Staff. (This is apparently a very big deal.)

The cyber operation, oddly named "The Olympic Games," focused on web-hacking the Iran missile program, and in 2010, managed to disable a thousand uranium machines. (Iran has the largest and most complex missile program in the Middle East, and the U.S. has been closely tracking it for years.) Cartwright not only came up with the idea, he also directed the operation, which involved developing a complicated and devastating cyberworm called Stuxnet, and collaborating with Israel to push it through to Iran's program.

Cartwright, 63, retired in 2011—and in 2012, a detailed report about the "Olympic Games" (no, not that one) popped up in the New York Times. The White House suspected immediately that it was an inside job: "We have no tolerance for these sort of leaks," they announced sternly—but, until now, were unable to track down the official responsible. Last week, Cartwright was sent a letter informing the ex-leader that he is officially under investigation. No one is sure yet if he'll be charged.

And if it's true—why? Well, we're not quite sure yet about that either. Reports have suggested that Cartwright might have leaked the information for the sake of, ironically, the White House: The New York Times piece certainly strengthened the credibility of the Obama administration's defense program. This was five months before the 2012 presidential election, in which good old Mitt Romney constantly argued that the nation's security programs were lacking. The NYT piece also credited the entire operation (and rightly so) to Cartwright, which might suggest it was something of an ego trip. Because that hasn't happened before, or anything, I keep coughing...