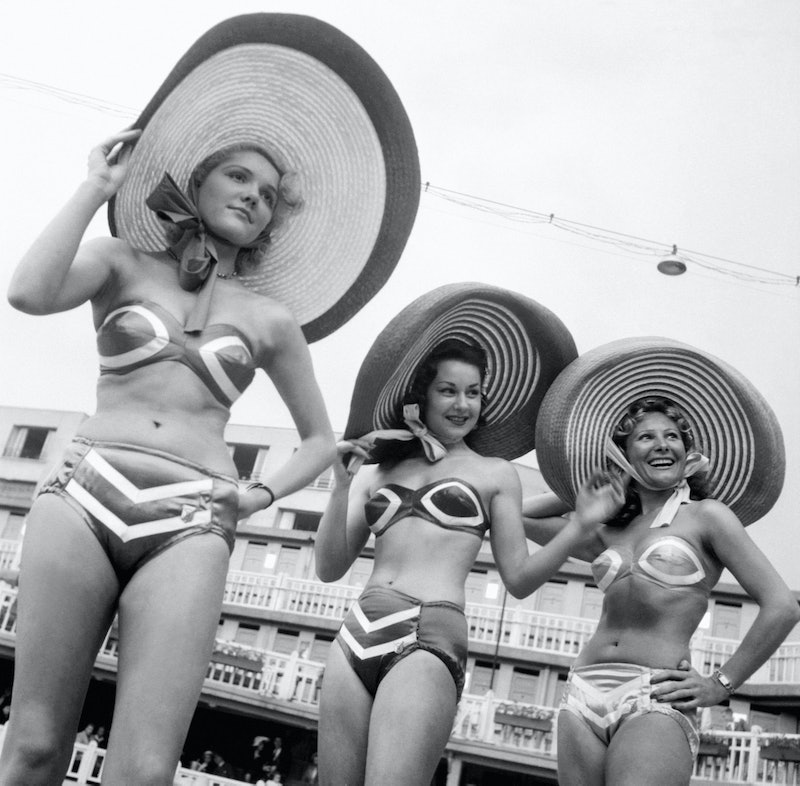 With the exception of lucky freelancers who can work in their pajamas, almost everyone gets dressed in the morning. This is such a basic ritual that it's easy to forget that there exists an immense — and sometimes very bizarre — political and sexual history of clothes. Women have donned quite an array of strange and highly uncomfortable items over the centuries, from whale bone corsets to stiff petticoats made of horse hair. When you actually think about it, however, it becomes clear that a lady's closet can be filled with a whole lot of liberating (albeit sometimes seedy) sexual politics, evident in everything from undergarments to swimwear.

It doesn’t require the greatest stretch of the imagination to guess that thongs as we know them today were initially tied to the sex industry — and, surprisingly, a popular New York mayor — but did you know that high heels made a comeback in large part thanks to the pinup girl movement? That’s not all, though. Mini skirts, bras, and even bikinis have interesting ties to the women’s liberation movement. Many styles even caused a lot of scandal for the bold women who dared to wear them first.

Many of the following clothes were once controversial and required strong individuals to rock them. Without even realizing it, you could be wearing any one of these historically important garments right now.

So, what do thongs have in common with a New York City mayor?

The modern iteration of the barely-there undies was invented at the request of Mayor Fiorello H. La Guardia in 1939. Ariel Levy explained in her book Female Chauvinist Pigs that the thong was actually invented during the World’s Fair in New York.

The big event brought many things to the Big Apple, but among them were exotic dancers. Instead of prancing around totally naked, Mayor La Guardia allegedly insisted that these ladies wear some sort of undergarment, according to Levy. The thong, which allowed the dancers to expose their bums but not their lady bits, was the compromise.

Similar to the thong, high heels have a historical place in the sex industry as well — but only because of their more recent reincarnation.

Long before they were coveted by Carrie Bradshaw, heels appeared on the boots of horseback riders to increase their stability. This tradition goes back as far as the 10th century, according to Slate, when Europeans borrowed the trend from Persia. Because the shoes were associated with equestrians, the heeled boots were subsequently linked with the upper class. Even Louis the XIV was one of the many wearers of heeled shoes.

According to Slate, however, when the French revolution came along in 1789 the high heel went out of fashion due to its impractical nature and its connotations to vanity. It disappeared from the fashion scene for centuries until the rise of pinup photographs during World War II, which were popular in army barracks and responsible for putting bombshells like Bettie Page on the map. After the war, high heels were closely tied to pornography. These days, though, they’re often still considered sexy and are a staple on the runway (even if stilettos are impossible to walk in).

As a more modern garment, the miniskirt has been associated with rebellious youth culture and women’s liberation since its creation in the '50s, according to the BBC.

Although mini skirts were around during the Roaring '20s, the skirt really took off in '60s-era London. Mary Quant is often touted as the inventor of the mini skirt. She recalled to BBC.com that businessmen would bang on the windows of her Kings Road boutique calling the skirt obscene.

At the time, mini skirts were a physical way to celebrate youth and even to rebel against more conservative parents. Lucky for us, this rebellious skirt is still oh-so fashionable.

Bikinis have allegedly been around since 300 AD. BBC News reports that mosaics found in Sicily’s Villa Romana del Casale depict girls working out in two-piece outfits just like the Kardashians of today.

However, the bikini as we know it goes back to the early 1900s. For all its modern impracticalities, the two-piece bathing suit was actually invented for female swimmers, who, in 1913, had just been granted the right to compete in Olympic swimming events. According to AmericanHeritage.com, Designer Carl Jantzen hoped to create a functional swimsuit for these athletes: A basic, fitted two-piece garment.

During World War II, fabric was also rationed, so designers of bathing suits were forced to omit excess fabric from their products, like the more modest skirt bottom. Of course, this was bound to cause some controversy, and scandal followed the bikini well into the '60s.

According to History.com, the modern bikini was actually created by Louis Reard, though, who literally gave his garment an explosive nickname the week after atomic bomb tests took place at Bikini Atoll in 1946. Talk about a fashion cannonball…

Between ditching corsets and burning bras, this undergarment has had quite the colorful history.

According to NPR, the first bras to be invented were likely from ancient Greece, where women would wrap linen around their chests. After the 1500s, however, it was all about the corset. Considering the corset would have been an absurdly unrealistic undergarment to wear to work, particularly during physically challenging factory labor, it's lucky that women were able to bid farewell to it during the Industrial Revolution.

At last in the 1920s, husband and wife team Ida and William Rosenthal invented Maidenform, which was the first company to use cup sizes in bras.

In 1968, however, several feminist protestors attended the Miss America pageant, referring to bras as “instruments of torture.” According to Women's Health, the ladies intended to burn their bras, but since police officers were present, they had to trash them instead. The name “bra burners” definitely stuck around, though.

Unsurprisingly, several women had a hand in creating the first sports bra. According to Regressing, Lisa Lindahl, an avid runner, made the first sports bra out of jockstraps with the help of costume designer Polly Smith. Back in the '70s, the only clothing option to exercise in was a conventional bra, so the fact that this one didn’t have straps that slipped or pinching underwire was a vast improvement.

So next time you put on your sports bra or favorite thong, just remember that those items may have all had a (sometimes totally odd) hand in women's liberation.

More like this
How Getting An Abortion Has Changed From The ’60s Through Today
By Amanda Chatel
9 Celebrity Couples With Matching Tattoos
By Jordan Murray
Yes, You Can Buy Off-White’s New Beauty Range In The UK
By Tomi Otekunrin
10 Show-Stopping Manicures From The 2022 BET Awards
By Paris Giles
Get Even More From Bustle — Sign Up For The Newsletter