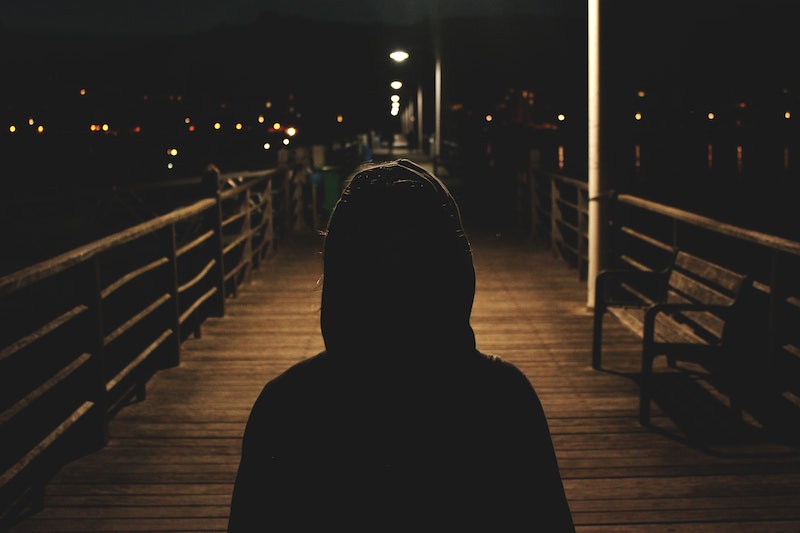 I have been ghosted on by guys many times, but usually, I kind of see it coming. Like with the dude I went out with a few times, who alternated between wanting to be single and wanting to be my serious boyfriend sometimes multiple times in a single day because he was clearly rebounding (he was just out of a six-year relationship). With that guy, I went on a camping trip for a week and didn't get any texts from him, but when I got home, got a flood of iMessages from a friend I had been trying to contact saying "I DID text you back but nothing would deliver!" Elated, I texted the dude I was dating: "if you were trying to get a hold of me, I'm really sorry—I wasn't getting iMessages out in the woods." The response was, "Well, I didn't text you, but actually I've been doing some thinking and I think I should be single right now." Oh OK.

But there was one time that I still scratch my head about. It's not the worst incident (I was once ghosted after SIX MONTHS and that was the most painful thing ever. It took at least two weeks to even understand what happened, then several more of denial and bargaining before I finally got to the just-plain-hating-his-guts phase. Ghosting is emotional torture, people, don't do it).

Not, this particular time happened after a single great date. But it was confusing nonetheless. I'll break it down into stages of processing the experience.

Let's just say my internet dates tend not to be the best, so I'm trying to manage my expectations for this one. It's also a Wednesday, so I'm fairly turned down.

Whatttt. I walk into the bar and spot him immediately: he looks like his pictures but like, more charming. Think "crooked smile, thick plastic glasses frames, sparkling eyes" charming. We joke about the pretentious names of things on the food menu and I note a nice laugh. He tells me about his recent move here from the Midwest and how he thinks New York can be a little lonely. Is it possible for a guy on Tinder to both be hot and also intensely normal? This is the best Wednesday of my life.

3. I'm Relaxing And His Hand Is On My Knee

Feels totally natural. I'm getting a little tipsy, and when there's a brief silence, we lock eyes, and he leans in. I don't usually kiss on a first date, but it feels so... easy. Our lips meet.

I'm embarrassed that I'm letting it happen, but utter and unabashed making out in public at 7:30 p.m. is in progress. He's an amazing kisser, and his hands are everywhere, IS THIS REAL LIFE? He smells like masculine honey dew melon and I am WITH that.

5. We're Outside The Bar, And He's Asking Me To Go Home With Him

"Let's go back to my place" he whispers, grabbing my ass, and I am definitely in uncharted territory. Is this moving fast because it's a miracle of chemistry or he does this all the time? I can't tell, but I kind of don't care though. He smells so, so good. And he's totally trustworthy because of the glasses.

He's literally tugging on the hem of my shirt with a sly smile. Maybe I can call in sick tomorrow...

OK, OK, OK, I definitely can't do this. I tell him I can't tonight, but I absolutely want to see him again and continue smashing our faces together at some point in the future.

OK maybe i'm letting him down TOO easy, but we stop to make out virtually twice per block as he walks me to the subway, and we somehow incorporate some scaffolding at one point. Not my classiest moment, but so, so worth it.

Time for goodbyes. I'm cotton mouthed and just starting to sober up. We're both out of the town this weekend, so he suggests we meet up Monday after work. One last kiss.

10. Encouraging Text Re: Plans On Monday

Yup, he texts ON THE WAY HOME about a date on Monday. The message pops up with a winky face when I'm walking out of my subway station in Brooklyn. We'll decide later when to meet up after work that day, he says, and I believe him. Yay!

So, it's 4 p.m.ish on Monday and I'm in the sexiest outfit I can feasibly get away with at work. It's a little weird that I didn't hear from him over the weekend, but I figure he was playing it cool. I give in and text first. "We still on for tonight?" *WINKY FACES*

He texts back a vague excuse. Oh, OK. Like... OK. I'm disappointed that he won't see my hot dress, but figure we can always reschedule.

13. We Talk About Making Plans That Friday, I'm Not Concerned

That makeout session is still fresh in my mind and clouding my judgement. I don't see any warning signs here just yet because I'm too sprung on how great the date was, how attractive and charming he was, how utterly into me he had seemed.

14. Slowly Realize Over Several Days That I'm Never Going To Hear From Him Again

My last unanswered text ("Free Friday?") is ticking minutes, hours, and finally days since I've heard from him. Is this... it can't be.

It totally is, I'm being ghosted.

Am I being dramatic? It's legitimately devastating to lose all contact with someone you were super excited to bone. I have never met a man who smelled like a sexy melon with a note of wood chips before and now I have to accept that I might never do so again. And his glasses game was so strong. And he hated the word "artisinal." God, why.

Has anything ever been this hard? I want to ask if I did something wrong, if his phone broke, if he has a girlfriend, if he was just really drunk. So many questions, and I know even if I ask them I won't get the truth.

"Hey." Like, how many times must I submit myself to rejection. The unanswered messages are just sitting there.

18. Want To Throw Myself At Him

SEXY PICTURES WILL SURELY GET ME A TEXT BACK, RIGHT? Genius. (Don't worry, I didn't. But I almost did and that's bad enough). I delete his number in my contacts to reduce temptation.

"Whatever, you're not that hot anyway" is such a white-male-on-OKCupid thing to say but I have the urge to say something hurtful. Too bad I can't come up with anything because he was basically perfect.

Teensy bit more grieving? Don't mind if I do. The worst part is I haven't really told anyone about this because I'm ashamed that I sucked face a stranger and then expected him to talk to me after. I want my friends to think I'm not as naive as that, so I'm suffering in silence.

21. And We're Still Going With The Grieving

Gotta get it all out. I finally delete all traces of his number in my phone (his number with the midwestern area code was still in my missed call log), and officially abandon all hope.

FIIIINE. This sucks and I don't know why it happened, but it's time to cut the losses and stop expending energy wondering if I stumbled into some bad lighting or my hair went flat. Or if he was gay. Still definitely want to know why he did this though. E, if you're out there, wtf?

23. Find Stuff That Was Wrong With Him In The First Place

His smile was crooked, after all. Let's just for all practical purposes consider that "busted."

24. Move On But Not Without Trust Issues

Eh, it's tough out here, but these things are character building.