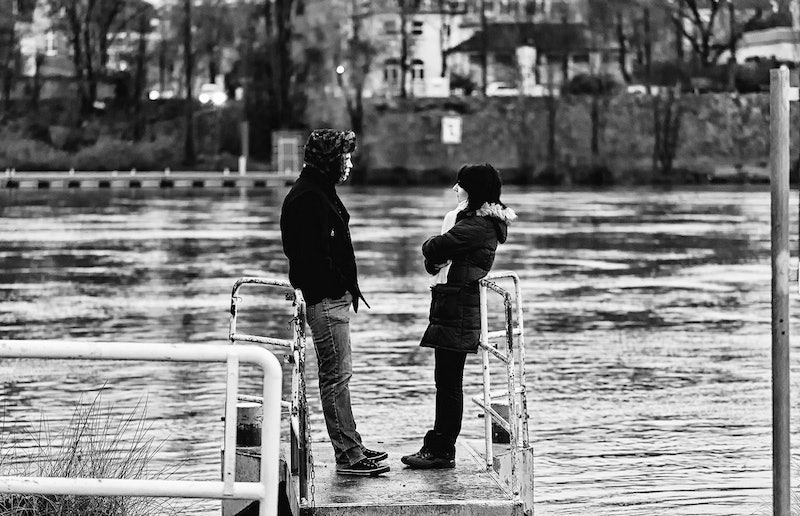 Rebounding: a selfish, tumultuous practice that takes the phrase “the only way to get over someone, is to get under someone else,” all too literally. But how do you know when you're someone's rebound? When it comes to rebounding, things often do not go well; chances are your rebound will quickly discover that you've been using him/her to “win the breakup,” and promptly alert social media to your actions with some colorful profanity. And while you may not feel you are using somebody, that pretty much comes with the territory. A rebound rarely means trying to find another meaningful relationship with another person; it almost always means looking for something else while trying to forget what you used to have.

Being a rebound comes with a slew of mixed signals that can teeter between “they're obviously not looking for something serious” and “they're trying to get too serious, too quickly.” The best way to be 100 percent sure you're helping someone get over their ex in the most unhealthy way possible? Look for these seven signs.

1. You Know They Got Out Of A Relationship Not Too Long Ago

This is how you definitively know that the long-term relationship from the past is a not-so-distant memory. Chances are if you've only been on one date and you even know about their ex, or that they even had a relationship with someone not too long before you, we are in dangerous waters. I was talking to a guy recently who brought up his ex-girlfriend in the second conversation we had. He said, and I quote, “You are the coolest girl I've met since my ex girlfriend,” and then would use every excuse he could find to bring her up; for example, if I was talking about my dog, suddenly he'd be talking about how his ex had a dog too.

Yeah, no. You still love her, bro.

3.They Seem A Little Too Overzealous To Post Pictures Of You Two On Social Media

If they're constantly snapping pics, and uploading them to Instagram, Facebook, Twitter, etc., this is a bit disconcerting. Especially if those pictures have captions like “Me and my new bae. She is SOOOO awesome! I mean, I think I'm in love!,” or anything to that over-exaggerated effect, you have to know they're putting on a show for someone, and that someone is most likely his or her ex. When a person is trying very hard to show you off to the world, it means that they have something to prove. And if you know that they're recently single, it could very well be that they want their ex to know just how happy they are without her.

You're not a prize, you're a person, and you don't need to put up with that crap.

4. You've Run Into Their Ex “Accidentally” On More Than One Occasion

So you're at a party, and the woman you know to formerly be their lover happens to be there. Coincidence, right? Well, when it happens again the following weekend...not so much. Similar to the serial-social media posting, your new partner is rubbing it in their ex's face by bringing you around where she is. Chances are, they've done some serious stalker-grade recon to find out where she will be, then somehow convinced you on the sly that it'd be a good idea for you guys to go there too. Anyone who cares that much what their ex thinks is not worth your time.

5. They Tell You Or Show You They're Not Looking For Anything Serious

Whether he comes right out with it, or shows you he's looking for something lighthearted, it could be because he's looking for a rebound. When a guy or girl doesn't want to get too emotionally involved post-breakup, it's because they're still in the grieving process over that past relationship. If they give you any indications that you're a “for-right-now,” girl, they're looking for something to take their mind off of ex-drama, and fill that now-empty space at their bedside. Hey, you may be OK with this because you're just looking to mess around too; if this is the case, then by all means go for it. But if you wanted something more serious, then this person isn't for you.

6. Alternatively, They Keep Talking About How Much They Want A Girlfriend

Mr./Ms. Eager Beaver has just informed you that their newly single status is one they're trying, with fervor, to change. The complete opposite of Mr./Ms. Not-so-serious, this person wants it all, and they want it now. This is just as big of a red flag, though. If someone is trying to jump into a relationship with just about anyone, chances are they're using a rebound to mask feelings they're having trouble coping with. And even if they adamantly expresses interest in you, and you do wind up dating them, there's a good chance this will all come apart in the not-so-distant future. When they're finally forced to confront feelings about his ex, you will be roped into a situation in which they're not fully sure they can give you everything they previously promised. What's more, if she comes back into the picture, they may just drop you like a hot potato.

If you're going out with someone and they already seem like the victim who was scorned by all womankind, they don't even have to say it: they just got out of a relationship. When people come off as bitter, constantly reasserting the fact that he's “the nice guy” or she's "the good girl" and women “just don't get it,” it's because a woman of their (most likely recent) past, has screwed them over in some sort of way. Whether they say it or not, you're a rebound and this may be the most volatile situation of them all. There's a good chance they will start to project that anger onto you (“You're just like her,” etc.) or they'll try to use you to restore their faith in women altogether, and no one can live up to that pressure.

Rebounding is something most of us are guilty of; I mean, who doesn't want to show off a new, happy relationship to the person who just tore their heart into a million pieces? It's almost like closure, but with the added benefit of one-upping your ex on the happiness scale. That being said, when you're the one in that position it doesn't feel so great, so when it comes to rebound territory, you may want to rethink if you're truly ready to move on.