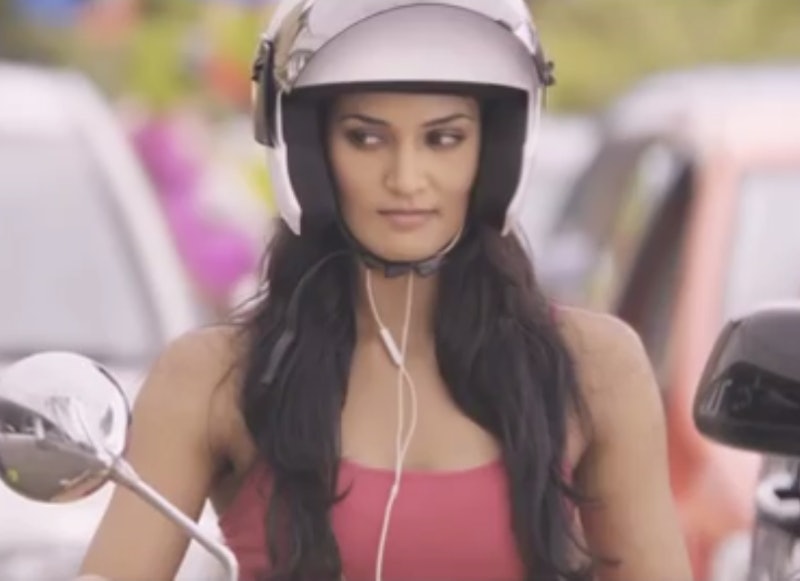 Prominent Asian film school Whistling Woods International released a YouTube video on Monday, exactly one year after the horrific rape case in Delhi that became international news and drew global attention to violence against women in India, that turns the tables on men who ogle women in public. The film shows four scenarios where women are subjected to the ever-pervasive male gaze while going about their daily lives, whether talking with friends or just riding the bus. But then a reflective surface, be it sunglasses or a necklace, turns these gazes back on the men themselves.

The video is great, both in its very realistic – and uncomfortable – portrayal of men staring at young women, and also in the message it is trying to send, namely "You look ridiculous and creepy, and we can see you." All too often, not just in India but all over the world, it seems that men looking at women in public places somehow think they are watching a display, as though women exist on a television screen. When, of course, in reality, women can see the people staring at them just fine, and those stares can make us feel not only uncomfortable and objectified, but downright unsafe. And yet the underlying idea that women going about their lives are putting on some sort of detached performance persists.

According to the video description on YouTube, Whistling Wood International wanted to make an ad empowering women as part of the celebration of 100 Years of Indian Cinema. Hopefully it has a big impact, and not just in India. It's the sort of message that needs to be heard everywhere.

More like this
20 Christmas Movie Quotes That'll Get You In The Holiday Spirit
By Alexis Morillo
Here’s Your Daily Horoscope for December 7, 2022
By Mecca Woods
69 Great Gifts For Guys No Matter What Their Hobbies Are
By Teresa Newsome, Mia Mercado and Brittany Leitner
13 Gifts From Latina-Owned Businesses For Everyone On Your List
By Marilyn La Jeunesse
Get Even More From Bustle — Sign Up For The Newsletter