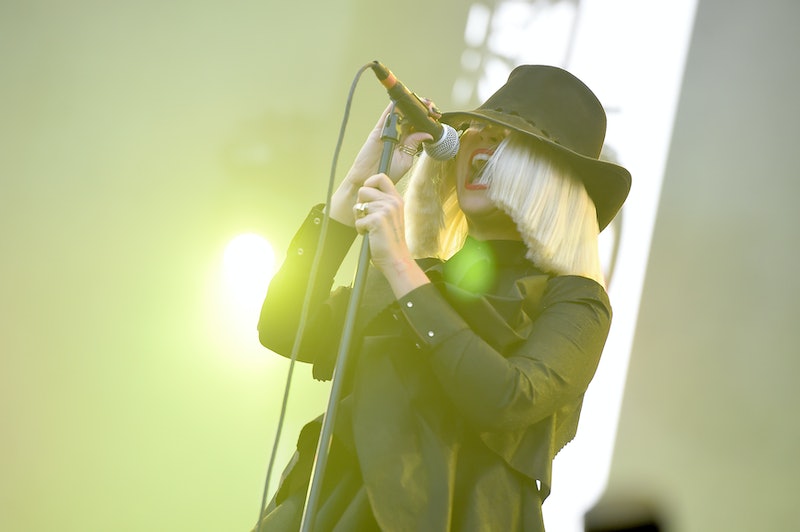 Sia is, without a doubt, one of the most talented and prolific songwriters on the scene right now. Having written for everyone from Rihanna to Carly Rae Jepsen, she has the uncanny ability to adapt her voice to nearly every style of music and also to record music of her own. I'm basically in awe of Sia on a daily basis, and I think a lot of people probably feel the same. However, unlike many of her fellow celebrities, Sia has never been one to seek the spotlight; in fact, she's actively avoided it, obscuring her face during live performances and doing very few interviews (and not very revealing ones when she did). With that in mind, you'll probably be shocked to hear that Sia is co-directing a documentary about her life. Shocker, right?

Once you hear a few more details, it might begin to make a bit more sense. Sia's husband, Erik Anders Lang, recent announced that he and producer Ryland Aldrich were launching an LA-based production company called Pictures, Pictures, which will focus on "feature films, long-form documentary series, short-form commercials, and branded content". One of Picture, Picture's first projects is Untitled Sia Documentary Project, which Lang and Sia will direct together, giving fans a look into the notoriously private singer's life. It sounds amazing, right?

It's likely a shock to hear that Sia would decide to open herself up in such a public way, given her reluctance to even show her face in public. But Sia has explained her decision not to focus on her physical appearance when performing before, preferring instead to let her music speak for itself in an industry that's obsessed with aesthetic appearances. It's been a brave (and yes, rather quirky) thing to do, but it's worked for Sia and certainly hasn't taken anything away from her work, so what's the problem?

It stands to reason that a large reason Sia has decided to move forward with this project is because she and her husband are at the helm, giving her full control over what is included and how what she does decide to share is presented to the world. That's certainly not the case when you're featured in other people's work, but I for one am looking forward to seeing more of her artistic process and learning about the woman behind some of the best songs of the decade, that's for sure.