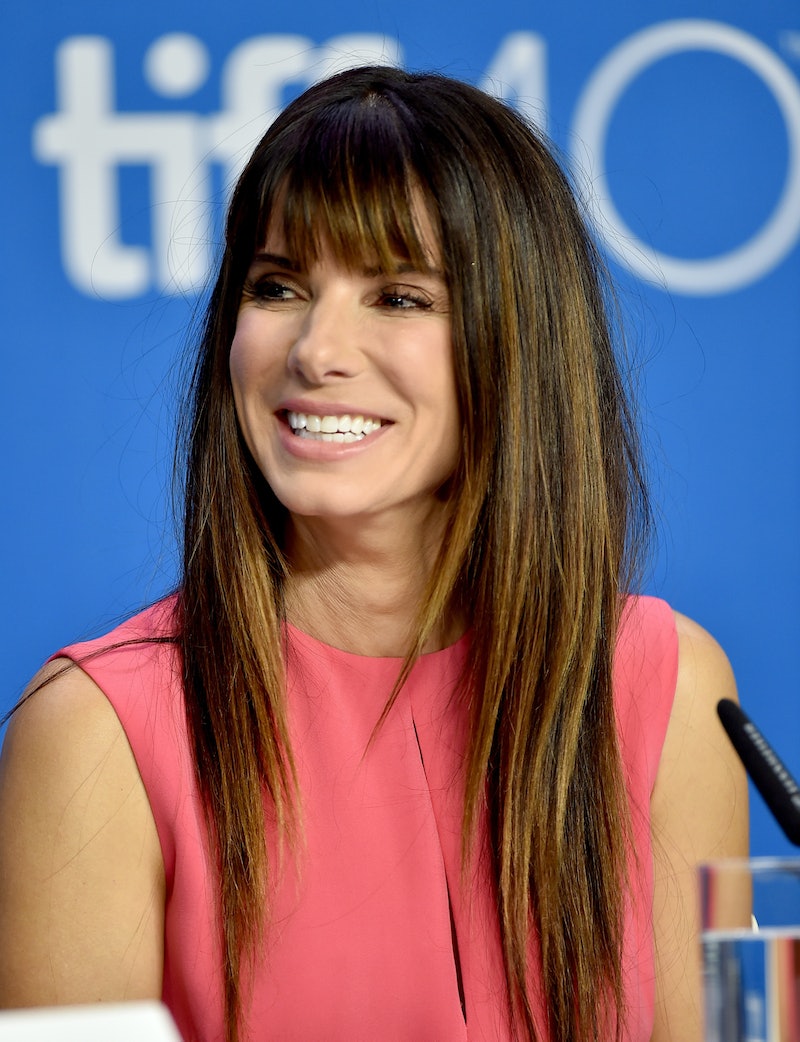 One of the most talked about films at Toronto International Film Festival's opening weekend, Our Brand Is Crisis , revolves around the American and international political campaigning. But it also marks a unique moment for women in film. Starring Sandra Bullock, Billy Bob Thorton, and produced in part by George Clooney, Bullock's leading role was originally written for a man. "Hopefully it shows a shift in the climate for women in film," Bullock says, noting that she approached Clooney and the director, David Gordon Green, about swapping the character's gender. "We still have some ways to go, but I don't mind being the one to ask, 'What have you got that you haven't made yet that you'd be willing to change for me?' And hopefully, is if this film has a level of success, it makes the studio go, 'OK, this is a viable thing for us. We want to make more of this for women out there.'"

Our Brand is Crisis, which had its world premiere at TIFF Friday night, is based off a documentary of the same name, and focuses on the use of American political campaign strategies in South America. "You don't just look to film anymore, you look to cable, to Netflix, to HBO, to Showtime, and you see the explosion of women's roles and diversity that's happening there. So I'd like to throw that onto the heap as well, because there's been massive changes. We still have some climbing to do," Bullock says.

Without missing a beat, producer George Clooney chimes in: "We're gonna do 12 Angry Women," he jokes. Bullock adds: "We'll all be on the same cycle."

But all jokes aside, the film presents a unique female character — one without any love interests or children mentioned — a seemingly rare occurrence for women portrayed in Hollywood, according to Bullock. "Had [those elements] been in there, I would have had it removed," Bullock says of her character existing without children or a male romantic partner. "It had no baring on the story or the character. I was really happy to avoid those subjects. It didn't need to be in the film."

Perhaps that's why Bullock doesn't feel the need to discuss in detail a scene which earned the biggest applause from the festival's first screening. The scene involves Bullock hanging her bare butt out the side of a moving bus to tease her opponent. "Why does everyone want to talk about the butt?" she asks. "That was George [Clooney]'s butt, as I said last night. Some reason no one wants to believe me on that. I would clap at my butt too. It's a lot of hard work that went into that butt."

The character of Jane, which was fictitiously created for the narrative, appealed to Bullock for many reasons. "She was human. She was flawed. She's struggling with mental illness, addiction, she's tried to take herself off the carousel once and she gets pulled back in because of an addictive need to win," the 51-year-old actress says. "She was unlikable and she was struggling, and that was interesting to watch because it's in all of us. She was able to try to do the right thing. Successful or unsuccessful, she tried."

Her hope with this film, outside of audiences applauding her glorious glutes, is an expanded appreciation for these types of complex roles for women. "We're complex, crazy little creatures. We deserve to have stories that reflect and normalize that."

More like this
Sandra Bullock’s Razzies Speech Proves She’s The Ultimate Miss Congeniality
By Sam Ramsden
Twitter Is Identifying With Sally Field & Jane Fonda’s Friendship In New Viral Video
By Jake Viswanath
Alicia Silverstone Revives Her 'Clueless' Character In This Super Bowl Commercial
By Jake Viswanath
How Andrea Riseborough Got Nominated — & Almost Disqualified For An Oscar
By Jake Viswanath
Get Even More From Bustle — Sign Up For The Newsletter
From hair trends to relationship advice, our daily newsletter has everything you need to sound like a person who’s on TikTok, even if you aren’t.