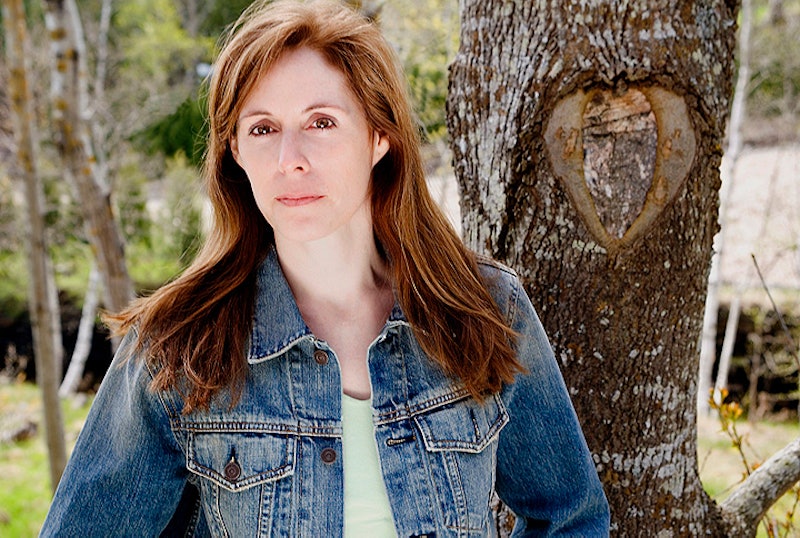 Shortly after the release of her first novel, Speak, in 1999, Laurie Halse Anderson was traveling around the country, promoting the book, when she met a girl she'll never forget.

The child had been a member of the audience at one of Anderson's presentations, and had listened to the author's stories about writing Speak, a book that focused on the aftermath of the young narrator's rape. The girl came up to Anderson after the presentation, and shortly into their conversation, Anderson revealed that, like the book's protagonist, she had been raped as a teenager. The child burst into tears, confessing to Anderson that her sister had been raped, and as a result of the trauma, was suffering from depression and drug use.

"She [the girl] was crying because she didn't know that anybody could be okay after being raped," Anderson tells me via phone. "And that's when I realized — adults have to kind of suck it up, and to start being honest with kids about what is the reality of the world. We have to be honest with them about what we've been through, because we have to help prepare them."

Anderson's "tell the truth" policy is commendable, but it's also landed her in hot water more than a few times. For every New York Times bestseller she's written (Speak, Twisted, Prom) and National Book Award nomination she's garnered (Speak, Chains), there's a critic touting the "dangers" of her 2009 novel, Wintergirls, or a parent banning Speak from the school library. Sexual assault, eating disorders, drug abuse — they're all fair game in Anderson's books, and in today's world, that often means one word: censorship.

"The difference between the mindset of a censor and the mindset of someone like me is I believe in preparing kids for the real world, and the censors think they’re trying to protect them," Anderson says. "Censorship is most often a reflection of the fears of the censors, their fears that they are not up to the task of having conversations about these hard things."

While there's certainly been progress made — "when Speak first came out, nobody would put it in a school... but what happened in 15 years is that it's now most often taught in the end of eighth grade," Anderson says — there's still a long road ahead before topics like sexual assault, eating disorders, and drug abuse can be read by teens without disruption from PTAs and administrators.

"When I speak to kids, I often say none of us would ever be embarrassed or ashamed if we got mugged in the parking lot," Anderson says. "The older I get, the more convinced I get that you have to speak up about these hard things if anything is going to get better for anybody."

Anderson has spent the last 15 years both writing and crusading; through her books, speeches, and blogs, she has forged a deep, personal connection with her readers, talking with them about everything from their battles with anorexia to doling out her own best tips on writing. She joins a small club of other authors like John Green and Sarah Dessen who do the same — many of whom, like Anderson, write YA.

"It might have to do with the intensity of every single emotional experience you have as a teenager," Anderson says. "That’s the time in your life, probably because so many of the experiences in your adolescence are new, and your hormones are all fired up, and you’re trying to figure so many things out, that everything — maybe not everything, but many things — has a deep, deep significance. That’s when you fall in love so intensely, that’s when you hate your best friend so intensely. Everything’s on the biggest volume it could be. And so when you connect to a book as a teenager, you connect with a book."

Like most of her others, Anderson's latest novel out January 7, The Impossible Knife of Memory , about a teenage girl dealing with her soldier father's PTSD, falls under the YA label, but the subject it addresses is typically found only in adult literature. Yet Anderson hopes, and believes, that teenagers will connect to Impossible Knife just as deeply as they did her others.

"One of the dirty little secrets of America is how many people who appear to be successful on the surface, in terms of income and owning your house and things like that," Anderson says. "But actually underneath it, you’ve got a parent who’s got some bad addiction issues, usually with alcohol but more often these days with pills... having lived through that, I know that’s really confusing. It doesn’t have to be that your mom or dad comes home from Afghanistan, but if they’ve got some demons making them struggle, often they’re gonna self-medicate. And that’s gonna be familiar to a lot of kids."

Anderson is personally familiar with the subject. As a teenager, she lived with the PTSD and alcoholism of her father, a World War II soldier who was tasked with burying the dead at the Dachau concentration camp, among other horrendous duties.

"My entire adolescence felt like this ugly ball of confusion," Anderson says. "My parents are old-school. You didn't talk about things. Nothing got discussed... and so when I was in eighth and ninth grade and our life was terrible, I knew that those memories existed for him, that he was haunted by bad dreams, but I just couldn't connect that to ‘well, why is he drinking? Why does he have to get liquor? Why can’t he just put the bottle down?’ There was no place to talk about it."

Although Anderson says she has made peace with her father, she knows that much of her suffering could've been avoided, or at least lessened, by the help of someone willing to start a conversation.

Her writing has allowed Anderson to become a pillar of support for her readers — but unexpectedly, her readers have done the same for her. When Anderson blogged and tweeted about the difficult decision to move her ailing father to an assisted living community recently, she received an outpouring of online support. Followers commended her tough decision, offering their help and tweeting their encouragement.

"It's not the same as the community of people you see at the grocery store or around your Thanksgiving table, but it’s a community, nonetheless," Anderson says. "That’s significant."

Anderson's decision to share such personal details with strangers — nearly 23,000 of them on Twitter — may seem odd to some, but for the author, it was a natural choice.

"I had a reporter ask me a couple years ago — I guess I always had a big mouth about things — do you think that you are comfortable sharing all these personal things because you’re a preacher’s kid? He stopped me dead in the water, and I went, 'That’s exactly it!'" Anderson says. "As a preacher’s kid, everybody knows your business."

Her willingness to share has made her a frequent user of Tumblr, where she's often found herself conversing with bloggers about many of the issues she's tackled in her novels.

"There's a fairly new community of people bound together by their need and their desire to recover from eating disorders," Anderson says. "I’ve heard from a number of kids struggling from anorexia... to have me come along and say ‘no, you’re gonna die, this is gonna kill you, you need to get some help'... those have been very useful conversations."

Anderson, who has struggled with body image herself, has also encountered the darker side of the Internet, blogs filled with "pro-ana" encouragement and people who have taken the messages of Anderson's books and distorted them to promote their own dangerous behaviors.

"There are people who like to pull lines and phrases out of the book and post them on Tumblr, completely out of context," Anderson says, adding, "This is what censors do... they'll pull out a line or a page, and if you pull it out of context, you can manipulate pretty much anything you want to manipulate. We could just pull the story of Cain and Abel out of the Bible and call it a murder mystery."

The benefits of such visibility, though, outweigh the downsides. There was the pediatrician friend who told Anderson how sexually assaulted teenage patients use Speak as courage to confess; there are the kids on Tumblr who struggle with anorexia and tell Anderson their deepest fears; and there are girls like the one at the presentation all those years ago who told Anderson about her sister's rape, and who have realized that, with time and support, even the worst traumas are possible to overcome.

"I’ve long been crusading on the concept that all teens need a village of aunts and uncles, adults who care about them, who will help them make smart choices, especially in a culture that’s not really keen on helping teenagers," Anderson says. "I'm happy to be a part of that village."

While YA may be an ever-expanding genre, thanks to authors like J.K. Rowling and John Green, society's condescension for the problems of adolescence hasn't changed much over the years, an attitude that Anderson is intent on fixing.

"What does that say about us as a culture?" she says. "Once there was a genre label that limited YA for teenagers, so many adults poo-pooed it. It’s another sign of the disrespect that a lot of our culture holds for adolescence."

Besides, she said, there's so little difference between the conflicts talked about in YA and in adult fiction, that the distinction is doing more harm than good.

Unfortunately, many people don't seem to realize this. Due to the serious nature of their plots, Anderson's books have often been labeled "problem novels," a term the author despises.

Anderson adds, "That expression is used disparagingly for YA literature... there’s a term that I borrowed from an English teacher... the expression she used with her class when she was teaching Speak was 'resilience literature.' That’s what I write. That’s so much more respectful to teenagers."

"Resilience literature" is an apt label for Anderson's books; her novels may not take place in war-torn futures or have characters leading worldwide rebellions, but they are undoubtedly stories of survival. Speak's Melinda fought the memories of her rape; Wintergirls' Lia battled anorexia and the shadow of her best friend's death; and in The Impossible Knife of Memory, Hayley must confront her veteran father's dangerous demons.

"You can argue that there are a whole lot of books that are 'resilience literature,' and that’s part of why we are drawn to them," says Anderson. "We're drawn to these stories of trying to figure out this confusing world."

And Anderson, with every book, tweet, blog post, and presentation, is the one with the answers. It's not a role she takes lightly.

"Everybody I know takes that responsibility very seriously," she says. "I know I do."