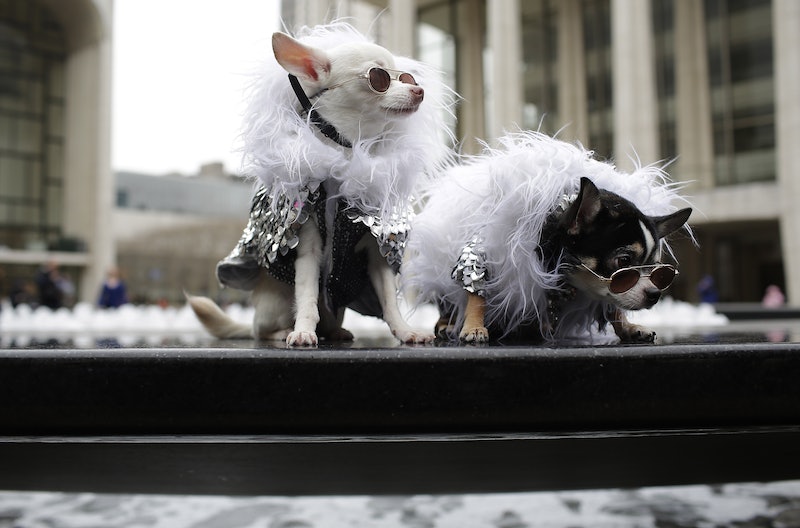 If you have a pet, and you spend a significant amount of money on it, know that you're certainly not alone. Pet spending is easily at an all-time high — Americans will spend more than $60 billion on their pets just this year alone. Thanks to a report from The American Pet Products Association, a not-for-profit trade group, we now have a dollar figure to put on Americans' love for their animals, which now stretches far beyond sustenance and basic medical attention into pet-specific climate control, wearable technology, human-grade diets, and intensive care for when owners are on vacation or even just at work. These developments may seem over the top, but they're right in line with a long-burgeoning American "pet culture," which has tripled in the past 20 years or so.

Pet owners are sometimes happy to refer to their pets as their "children," and studies indeed show that people's brains fire up in response to their pets in a similar manner to the responses for their children. Cultural critics have certainly made much of the fact that there are many young Americans who are literally having dogs instead of babies, and will go to great lengths to show them the best care money can buy — which, apparently, is a lot.

DogVacay's Kerry Bennett, SVP of marketing, is no stranger to the pet industry — in her position, she knows how to get pet owners to shell out for premium options for in-home boarding (DogVacay is sort of the Airbnb of dog care). She confirms that larger social shifts have drawn people's attention (and wallets) towards their pets. She tells Bustle via e-mail:

As more and more Americans postpone marriage and children, we have seen pets rise in importance as members of the family. Within our own DogVacay community, for example, 65 percent of their dogs receive birthday presents and 75 percent sleep in the bed with the pet parents. From a practical standpoint, delaying kids means that there is quite literally more disposable income to spend on our four-legged friends, but I think even more so is the fact that more and more people are willing to invest the same care for their pets as they would be for human families.

When your family lives far away, you and your friends keep crazy work schedules, and your love life is a revolving door of Tinder dates, a pet can become an emotional safe haven in a cold world. Though they're a big responsibility, people basically like feeling depended upon, and most adults are capable of caring for an animal well if they really want to. Although I'm now five months pregnant with my first human child, I became a pet parent the better part of a decade ago at 22 years old (when I could have started popping kids out instead, I guess). True to the stereotype, I adopted two chihuahua mutts from a rescue group and have dutifully cared for them day in and day out ever since, even relocating them across the country — twice.

The study on high-roller pets didn't surprise me, because our family spends significantly more than $1,641 per year per pet. Though we're strong earners who spend more than is strictly necessary on them, it really adds up in any case. My dogs don't cost much to feed, perhaps $50 per month for both of them. But when my husband and I are both working full time, we do invest in a weekday dog walker to the tune of $400 per month to take a load off our minds and some pressure off our workdays. Boarding even just twice per year for short trips to visit family ends up costing $1,000 or more. And another $100 per month buys us doggie health insurance, which is a tremendous value in peace of mind. My older dog is hardy but unlucky, and he has by now received thousands of dollars of top-notch care through our policy, for chest X-rays, skin cancer surgery, and an emergency spinal surgery (the pet insurance pays out happily and as expected, which is more than I can say about any human health insurance I've had).

Chip and Ringo have no idea of how much we spend on them, but they really are part of the family instead of just creatures who happen to live here. There's nothing especially weird about that, considering that humans have been closely coexisting with dogs for tens of thousands of years. Pets are at the very least no more silly than any other hobby (baseball card collecting, anyone?), and I hope our daughter learns from our pets that caring for living things is effort well-spent.

More like this
15 Easy Pranks To Play This Halloween
By Emily Kelley and Lauren Grant
10 Stranger Things-Inspired Halloween Costumes For True Fans
By Emma Carey
10 Pumpkin Recipes That Are Way More Creative Than Pie & Lattes
By Rebecca Deczynski and Alexis Morillo
Bennifer, Kravis, & 14 Other Fun Celeb Couples Halloween Costume Ideas
By Emma Carey and Brittany Leitner
Get Even More From Bustle — Sign Up For The Newsletter