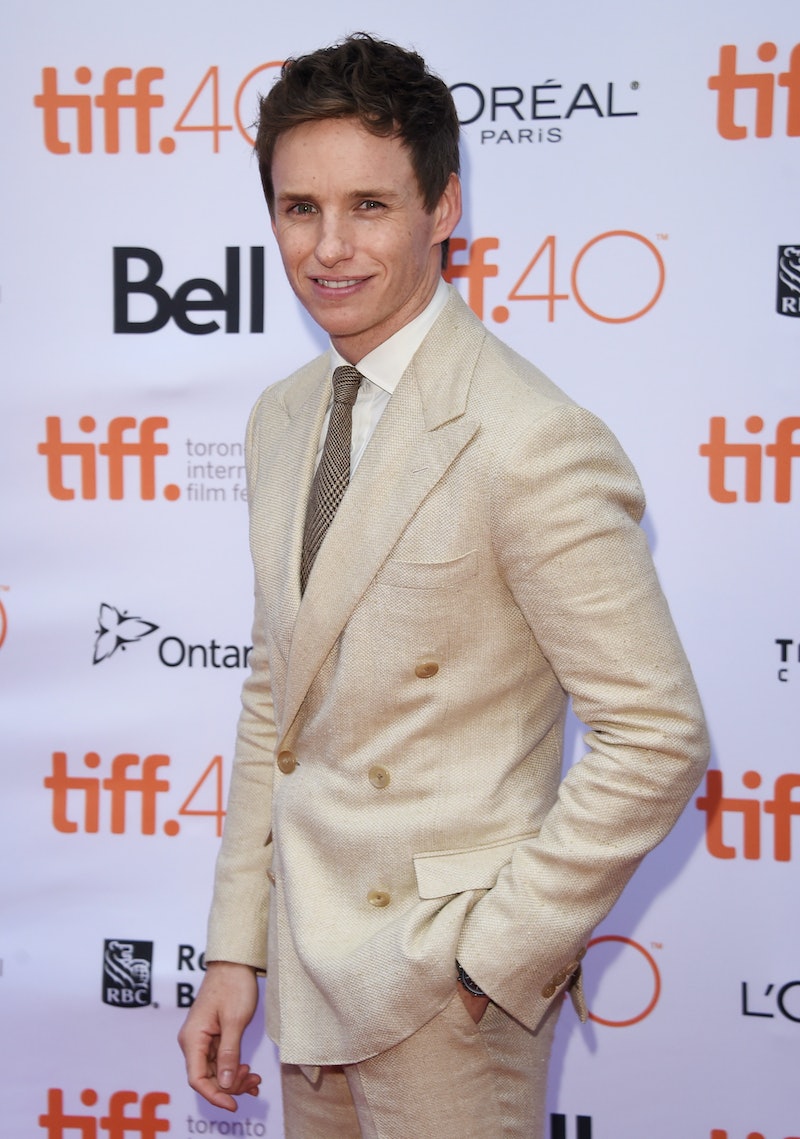 Actor Eddie Redmayne's next big role has him playing one of the first pioneers in the transgender community in this winter's The Danish Girl , and apparently, the film opened Redmayne's eyes to transgender issues. EW reports that at the Toronto Film Festival, Redmayne spoke about the importance of playing a trans character, telling audiences, "The need for cisgender people to understand what trans people have gone through is huge and incredibly important."

While it would've been ideal for a trans actor to be cast in this role (which is a separate issue worth fighting for, it's great that Redmayne is so passionate about being an ally to the trans community. The British star is known for taking on daring roles that challenge Hollywood norms — he won an Oscar earlier this year for his incredible turn as physicist Stephen Hawking in The Theory of Everything. But The Danish Girl, due in theaters this November, might be his most important role yet, helping, as he said, cisgender people get a stronger understanding of trans issues.

The film takes place in 1920s Copenhagen and follows Redmayne as Lili Elbe, one of the first known recipients of gender confirmation surgery, and her relationship with her wife, Gerda Wegener (Alicia Vikander). For the role, Redmayne did extensive research, including speaking with many transgender women, he said in a post-TIFF screening Q&A.

"I was sucker punched by the emotion of it," he said, according to EW. "This idea of two formidable people going on this journey together. The notion of love not being defined by gender, not being defined by anything other than two souls meeting really. As I started to research and meet people from the trans community, who were so overwhelmingly generous with their stories, the notion of the great privilege to play someone like Lili, the stakes just got higher and higher and higher."

This is so important for Redmayne to say, and it's great to hear that he took so much care in ensuring that he played the character accurately and respectfully. It's also not the first time the actor has been socially aware; here are a few of the other times he's shown his support for issues that matter.

Starring In The Theory Of Everything

Redmayne did extensive research on ALS to play Hawking in his Oscar-winning role, according to an interview with Variety. This included reading Hawking's physics books. "I tried to read literally everything I could get my hands on," he said. "It became hilarious, because I would get 40 pages in, and I was like — ‘Eddie, none of these words make any sense to you.’" So he consulted with a physics professor, as well as ALS patients at a neurology clinic in London. Redmayne even dedicated his Oscar to Hawking and folks currently battling the disease.

In the September issue of Out magazine, Redmayne praised Caitlyn Jenner for her bravery going through her transition so publicly.

“I was in New York when the [Jenner] Vanity Fair cover came out and I was reading The New York Times, and all of the op-ed pieces that were being written about it,” Redmayne said. "I absolutely salute her courage. Hers is a very specific story, and it’s one that shouldn’t stand for everybody’s. But it is amazing what she’s gone through and how she’s done it. It’s a civil rights movement."

Redmayne starred as Marius in the 2012 version of the Broadway musical, events of which lead up to the French Revolution. The actor told The Hollywood Reporter that it's an important movie (and stage musical) because it shows that with love, anything is possible. "There’s this overarching message of hope, and redemption, and the idea of loving the person next to you," Redmayne said. "Starting your own revolution just by loving the people close to you."

Redmayne is no stranger to voicing his opinions on important issues, and with The Danish Girl, he's continuing to show respect, honesty, and humility toward subjects that matter.