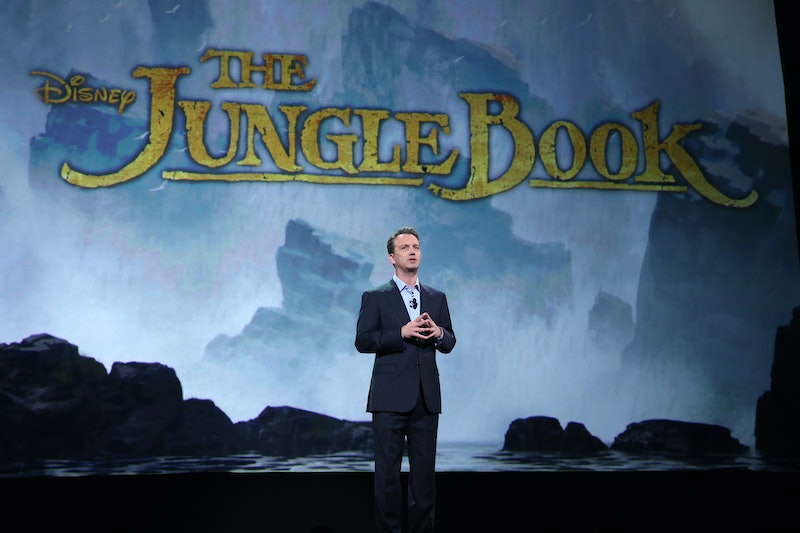 The Walt Disney Company has just released the teaser trailer for The Jungle Book, its upcoming film, and it is one of the most gorgeous things I have ever seen. The short clip, posted on Instagram, is hauntingly beautiful, with sparse acoustics and a monochromatic color scheme. It pans through a shadow filled jungle, sweeps past a slow moving river, zooms in among twisting trees to reveal Mowgli, standing in silhouette, alone in the forest — oh my goodness, it makes me so excited!

The film, directed by Jon Favreau, stars newcomer Neel Sethi as Mowgli. The jungle will be populated by a bevy of CGI-animated animals protrayed by Idris Elba, Scarlett Johansson, Lupita Nyong'o, and Christopher Walken (just to name a few). Bill Murray plays Baloo, a bear and Mowgli's best friend. It is scheduled for release on April 15, 2016.

It would appear that this clip, above, corroborates Sir Kinsgley's assertion — The Jungle Book will be a visual feast that will enthrall and excite viewers. The only disappointment is that this video is too short, and it leaves me wanting more! That's what makes it such an effective teaser trailer, though.

Disney is set to release a full-length trailer soon, but I need something to satisfy my almost insatiable need for the movie, now. Luckily, The Jungle Book is just the latest in a line of recent live-action Disney adaptations, and those other films do not disappoint in the visual department, either.

This scene is literally my dreams as a child brought to life. The set-design, the music, the costuming — THAT DRESS — the film doesn't even seem real, it is that beautiful. When Prince Charming spins Cinderella and her dress billows, I find myself catching my breath.

Maleficent is directed by special effects artist Robert Stromberg and his mastery of the visual arts show. The special effects flow seamlessly into the dark and haunting world of Sleeping Beauty, weaving a fairytale with unrivaled visuals.

Don't even get me started on Tim Burton's Alice in Wonderland. Burton somehow created an entire world ripe with visual intrigue and depth, and I can't take my eyes away from the screen. This film makes me want to be Alice, The Queen of Hearts, The Mad Hatter or the pig used as a ottoman — It doesn't matter. I'd be any character just so I could live in that gorgeous world.

More like this
Harry Potter's Viktor Krum Has Undergone A Huge Transformation Since Hogwarts
By Sam Ramsden and Meguire Hennes
The First Look At Halle Bailey’s Ariel In ‘The Little Mermaid’ Has Twitter Hyped
By Brad Witter
Netflix Reveals First Look At Wednesday In The 'Addams Family' Spinoff Series
By Bustle Editors
She Founded American Girl To “Bring History Alive.” Then She Made Over A Town.
By Amanda FitzSimons
Get Even More From Bustle — Sign Up For The Newsletter