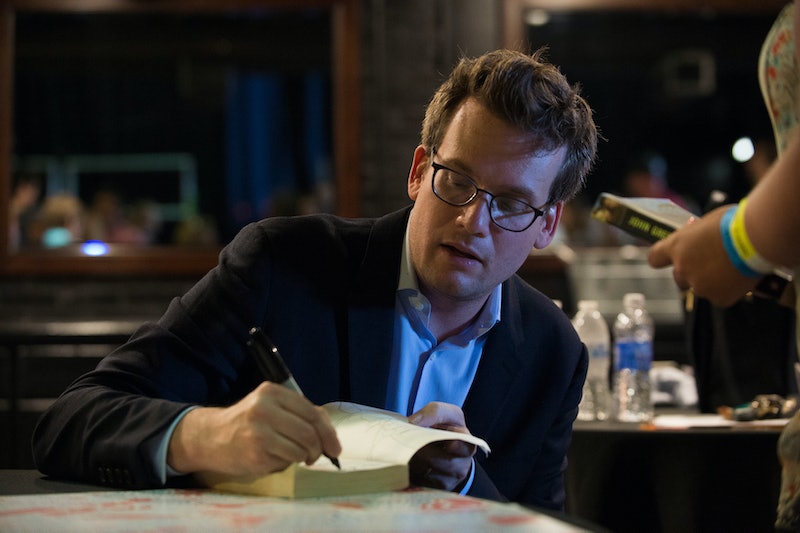 After 2012's The Fault In Our Stars — chances are, you've heard of it — Nerdfighters have been desperate for a new John Green book. This is your drop-everything emergency alert: John Green hinted that he's working on his next novel via Twitter this morning. I don't think the word "squee!" appropriately covers all of our feelings right now.

Green hit us all with a bad news-incredible news punch Monday morning, waking us all up from our weekend-ending slumber. The beloved young adult author announced that he's taking a hiatus from social media beginning immediately. But before we could shed tears, he added that his hiatus was to "work on a new story." When will he be back? Only when he has made "substantive progress" on his next project. Now, let's all wait until we spot the author on Twitter again, because it means our dreams are soon coming true.

Green is coming off an absolutely massive two years when — though he didn't publish a new young adult novel — two of his acclaimed books where made into feature films: The Fault In Our Stars and Paper Towns . There has also been buzzing about a movie adaptation of his Michael J. Printz Award-winning 2005 novel Looking for Alaska . But a new book could only propel Green higher — if that's even possible.

Let's break down exactly what Green said on Twitter:

The phrase "get some writing done" has never been so beautiful. And of course we aren't alone in our jumping up and down, some big names have jumped in to wish Green godspeed.

And don't fret too hard over the prolific Green's absence from social media. He announced there would be a replacement Tweeter, writer and fellow vlogger Rosianna Halse Rojas.

Speaking of vlogging, John and Hank Green's "Dear Hank and John" will still be up and running during the hiatus. Phew.

Whether or not any of us can expect to see our names in John Green's next book as characters, this is pretty swell news. But for now, let's all take Green's advice and be kind to each other while we wait, and try not to pull a muscle fist pumping too hard.

More like this
'Mayfair Witches' Already Changed 2 Major Characters From The Books
By Grace Wehniainen
Your Guide To Watching 'Everything Everywhere All At Once' In The UK
By El Hunt and Sophie McEvoy
Here Are The Clothes People Want The Most Right Now, Based On Amazon Data
By Laura G.
15 Photos Of 'The Last Of Us' Star Pedro Pascal That Cement His Zaddy Status
By Radhika Menon
Get Even More From Bustle — Sign Up For The Newsletter
From hair trends to relationship advice, our daily newsletter has everything you need to sound like a person who’s on TikTok, even if you aren’t.