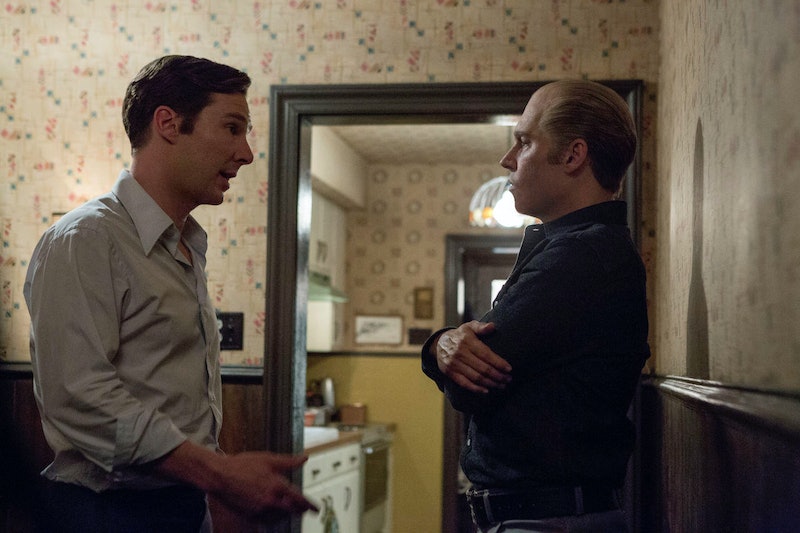 The trailers for Sept. 18's Black Mass check all the boxes required for an American gangster yarn: punches thrown, crying women, a thumping soundtrack, and men in shirtsleeves saying cryptic and dramatic things to each other. But what struck me the most about those promos was Johnny Depp's cold, blue-eyed stare. I'm used to seeing the actor under pounds of eyeliner and donning multi-colored wigs, but his transformation into infamous Bostonian Jimmy "Whitey" Bulger is a new level of unsettling. Bulger is a legendary figure in true crime because of his almost inhuman capacity for evil, and a lack of remorse that gives some credibility to the movie's dark title. But what does "Black Mass" actually mean?

The film is based on a non-fiction account of the FBI's dealings with Bulger written by former Boston Globe reporters Dick Lehr and Gerald O'Neill and titled Black Mass: Whitey Bulger, the FBI, and a Devil's Deal. Another theatrical title, yes, but not much of a overstatement. Thanks to his "friends" in the bureau, Bulger was able to run his operation with violent impunity for years; drug dealing, murder, extortion — all were systematically ignored in exchange for information about a rival crime family, the Patriarcas.

So the title itself is a carry-over from the source material, but that still doesn't explain the phrase's origins. I looked into the term "Black Mass" and found that its meaning has changed several times during its centuries-long history. Here's what I learned.

The Boborites were a cult-like group who, according to the writings of a bishop named Epiphanius, performed sexual rituals in some semblance of a Christian mass — aka "black masses." There's very little information available about the sect, but if this is true, the inversion of sanctioned religious ceremonies began almost immediately after the ceremonies themselves took shape.

In The Middle Ages, Satire Was The Name Of The Game

Several parodies of Roman Catholic mass were popular festivals during this time, including the Feast Of Fools, which Victor Hugo described in the novel The Hunchback Of Notre Dame. These festivals often involved mocking the clergy and religious ritual as well as drinking and feasting to excess, so they weren't too popular with church leaders.

In The 16th Century, Occult Versions Started To Take Shape

An interest in witchcraft arose in Europe during this time period, specifically in France. Many of these ceremonies were intended to influence the behavior and desires of others; black candles, naked women, and Satanic prayers appear in several accounts. These traditions carried over into 19th and 20th century "Satanic masses."

A student group called The Harvard Extension Cultural Studies Club scheduled a Black Mass with support of the local Satanic Temple, ostensibly to educate others on the ceremony's history. Despite the stated intent, they were forced to cancel after experiencing significant condemnation by the local Catholic archdiocese as well as members of the surrounding community and Harvard President Drew Faust, who called the event "flagrantly disrespectful and inflammatory."

The Satanic connotations of the movie's title point to Bulger's many, many crimes and the lives he ended and destroyed. But I also think the satirical origins of the "Black Mass" term fit the story, since many would say that the FBI's deal with the gangster is a mockery of justice itself.

More like this
Kim Petras Just Made Grammy History
By Jake Viswanath
'Brookside' Is Coming Back & Soap Opera Fans Are Going Wild
By Sam Ramsden
Bennifer's Relationship Timeline Now Includes A Grammy Date Night
By Jake Viswanath
What Is Mary J. Blige’s Net Worth? The 9-Time Grammy Winner Is Doing “Just Fine”
By Hugh McIntyre
Get Even More From Bustle — Sign Up For The Newsletter
From hair trends to relationship advice, our daily newsletter has everything you need to sound like a person who’s on TikTok, even if you aren’t.