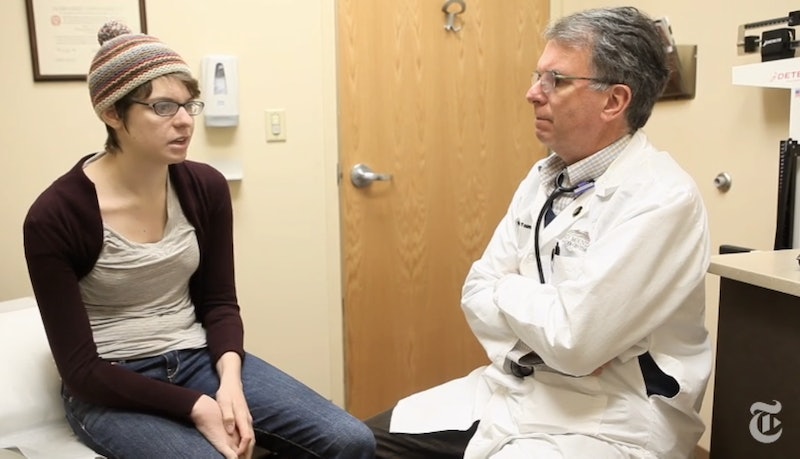 Two years ago, a post on labeled "Reddit, help me find some peace from dying (I'm 23)" went viral on Reddit. Within the post, Kim Suozzi's explained her desire to cryogenically freeze her own brain after death, in order to preserve it in case future technology allowed for the ability to upload the consciousness in the future. At the time, the glioblastoma (otherwise known as brain cancer) patient was thought to have six months or less to live. In a moving video, The New York Times chronicled her story throughout the next few months of her life leading up to her death in 2013, and explored the implications of trusting in a science we haven't even perfected yet.

Today, Suozzi's boyfriend Josh Schisler posted the video onto Reddit, so the community could see the results of the procedure that they overwhelmingly helped crowdfund back in 2012 and hear Suozzi's full story and reasoning. In the video, Suozzi explains that she knows the odds are against her: she not only has less than a one percent chance of living, but there is less than a one percent chance that the technology to properly upload a brain will catch up in time for hers to be mapped and bring her consciousness back. But Suozzi was unfazed by the odds. She was so determined to try that she made Shisler her power of attorney, opting to sign a form before she lost the mental capacity that stated she wanted to be allowed to travel to Scottsdale, Arizona, where the cryogenic freezing took place, and that she wanted to be able to refuse food and water to make it happen.

The facility is called the Alcor Life Extension Foundation, and it is dedicated to cryogenic preservation of the human mind and body. At present, it costs $80,000 dollars to cryogenically freeze the brain, and $220,000 to cryogenically preserve the entire body. In order to be successful in the preservation, they have to operate in the minutes between the heart stopping and the brain dying.

In her last days of life, Suozzi and Schisler relocated to Scottsdale at the recommendation of the foundation, who is on "standby" at all hours of the day for patients who are declining rapidly enough to require their intervention. Once legal death is declared, they then immerse the body in ice and artificially restore breathing and heartbeat long enough to administer protective medications and prepare the body or organ for the -225 degrees F rapid cooling.

By the time Suozzi arrived in Scottsdale, she was so affected by the GBM that she could not remember what state they were in. But still, when Schisler pressed her to remember why they were there, she had held fast to the desire to have her brain cryogenically frozen.

The video shows a harrowing montage of images taken in the last few days of Suozzi's life, as well as the beginnings of the process for cryogenic freezing. Although the process is decades away from potential results, Suozzi left viewers with this message: “When a scientist states that something is possible, he almost certainly is right. The only way of discovering the limits of the possible is to venture a little way past them into the impossible. Any sufficiently advanced technology is indistinguishable from magic.”

Watch the entire moving video of Suozzi's story below: