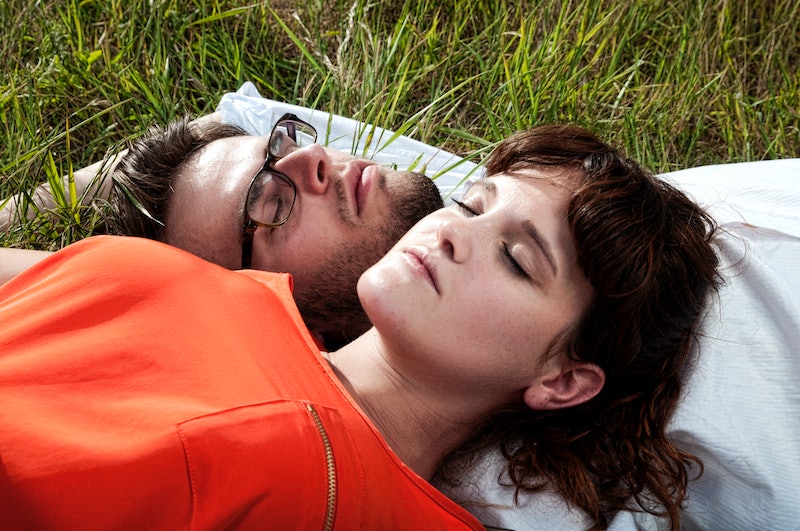 It happens at Thanksgiving, Super Bowl parties, and on those girls' weekend nights when you binge on Netflix and cookie dough together. You eat all the things and it leaves you feeling sluggish, probably a bit bloated — and slightly regretful. Yep, I speak of food comas, and all normal food-lovers have experienced them. When you're in the middle of it, surrounded by piles of French fries and grilled chicken strips, it feels glorious and satisfying, but just give it an hour or two until you're laid up on the couch with a massive tummy ache, questioning why you reached for those last few cookies.

Nutritionist Lisa Young told Vice that it's a natural human habit to keep eating even after we're comfortably full; we just can't make ourselves stop, especially if we're in a social setting that's so entertaining we're distracted from what our stomachs are trying to tell us. We usually end special occasions feeling drowsy and impossibly exhausted, but even though we toss around the term "food coma" as if it's as concrete a concept as gravity, it's worth asking: is this phenomenon an actual scientific condition? Or have we just made the whole thing up to feel better after finishing a large meal?

Luckily, there has been a lot of research done lately on the subject to help us understand the chemical processes that take place in our brains, as well as the physical transformations that happen in our digestive tracts, when we gorge.

The good news is that it's not all in our heads — food comas are very, very real. Here are all the facts you need to know about them.

What Are Food Comas?

The official name for food comas is postprandial somnolence, which is defined as "extreme lethargy and sleepiness after a heavy meal." All those uncomfortable feelings we're left with are physiological responses to our eating way more than our bodies need in one sitting. It's certainly not a rare condition amongst Americans, but that doesn't mean they ever get easier to endure.

We used to think postprandial somnolence was caused by lack of blood to the brain, because it had supposedly all moved down to the mesenteric vessels, the tubes that take care of our intestines and colon. After a German study conducted in 2003, though, we discovered that our brains — and hearts, for that matter — do their job pretty well. They can stay perfectly oxygenated even when we splurge. The true reason we feel unproductive and tired, then, is because the overload of nosh acutely activates the parasympathetic nervous system and its counterpart, the sympathetic nervous system, which is responsible for the "fight or flight" response. The bigger the meal, the more profound this autonomic shift is, resulting in low energy and sudden desire to crash.

An additional theory was put together by a group of Korean scientists in 2009, when Sang Woo Kim and Byung In Lee realized that the tummy and brain are in cahoots, and they both tell you it's a good time for a nap after we devour a massive cheeseburger combo meal. The gut tells the arucate nucleus, the part of the brain in charge of appetite regulation, that it's full. Then, the "satiety center," also known as the ventromedial hypothalamus, is stimulated, which causes the lateral hypothalamic area, a section that coordinates arousal and action, to shut down.

Do Certain Kinds Of Foods Trigger Them?

Dr. Joy Dubost, a dietician and spokesperson for the Academy of Nutrition and Dietetics, says carbohydrates play a big role in the food hangover. (Surprise, surprise.) Things like Thanksgiving stuffing, fried potatoes, and garlic bread have high glycemic indexes that increase the amount of glucose in our blood. Our bodies automatically send out a lot of insulin in an attempt to balance everything out, but that triggers the release serotonin and melatonin, two chemicals that are directly correlated with nap time. The American Journal of Clinical Nutrition released a study in 2007 proving that high glycemic index food makes individuals fall asleep much faster.

There's also a chemical called tryptophan that is naturally found in most meats, including and especially turkey. When it gets processed through our system, it transforms into serotonin in our brains; hence the Thanksgiving slump. Tryptophan, one of the standard 22 amino acids, can also be found in many dairy products like cheese and yogurt, which is why an afternoon snooze usually follows a greasy grilled cheese.

All this is especially dangerous when combined with alcohol — unfortunately, overeating and wine go hand-in-hand at holiday get-togethers, and this combination almost always results in lethargy and crankiness. It takes a lot of energy for the body to process booze as it is, so when it's already working overtime to work through your heavy-laden, high-calorie meal, you can bet you'll feel sleepy.

How Do You Know It's A True Food Coma?

There are quite a few common symptoms of postprandial somnolence, which include stomachache, headache, sleepiness, lack of motivation, and constipation. You might feel gassy and bloated, but one side effect that doesn't seem so obvious is a disturbed sleep cycle. Your Circadian rhythms could be thrown off temporarily because your body is so concentrated on digesting and moving the food safely through, that it doesn't have much energy left to give to the rest of you. Don't be surprised if you either can't fall asleep or you have trouble waking up the next morning. The biological clock just needs a little time to reset.

In the long run, they won't kill you, but that doesn't mean we should allow ourselves to slip into a food coma at the end of every workweek. Researcher and professor of ecology Fred Provenza at Utah State University told Vox that postprandial somnolence could mean much more than overeating; it could be our body's way of telling us something important about the nutrition we're getting from our food. That sluggish hangover is also referred to as "negative post-ingestive feedback," which is nutritional wisdom all animals are born with — humans just aren't very good at listening to it.

While other less evolved animals can use flavor and sensation to figure out what nutrition they may or may not need, we have been showered with so much artificial food that our bodies have forgotten how to read those same signals. We're not getting the proper nutrients we need, but instead of consciously being aware of this fact, we overeat in an attempt to get nutrients in short supply. Cue the discomfort and malaise, as he calls it, which is a result of excess in toxins.

In a nutshell, Provenza argues that our food comas aren't only a sign of our gluttony, but they are a clear signal that we aren't curbing our cravings well enough — and we might even be malnourished. He recommends we eat with more awareness and commit to a well-balanced diet so we can start to retrain ourselves to listen to what our bodies are saying.

Is There Any Way To Recover From Them Faster?

First of all, drink lots and lots of water — more than you want to. Eight glasses a day will help your flush out all the nasty toxins, regain normal constitution, and fight fatigue. It will also assist with clearing up your skin, which probably isn't looking its best after all that ice cream. On the days following your dive into the deep end, make a plan that has you regularly eating small meals every few hours in order to avoid the kind of hunger pains that might result in bingeing. Don't even think about fasting, as that will make you feel weak and moody, which are two feelings that often lead to unhealthy emotional eating.

Our first instinct after Thanksgiving dinner is to swear off carbohydrates forever and ever, but that doesn't do any good. You need carbs to keep your energy up and properly digest all the turkey and stuffing; instead of white bread and rice, though, opt for whole grains, like granola or quinoa. Incorporate as many fruits and vegetables as you can to get in all your dietary fiber so you're not struggling in the bathroom. Tuck away all the leftover booze you've got lying around too. You can also get yourself a hot water bottle; the heat aids with digestion and it just feels nice to have something warm and comforting in your arms.

How Can You Avoid Them In The First Place?

The next time you find yourself at a big social event and there's a pile of nosh in front of you, take a second before you dig in. Chew purposefully, think deliberately about what you are actually are craving and what you are just munching on to pass the time. Drink more water during throughout the meal to help you digest better and prevent you from requesting a fourth cocktail.

The deadly combination is carbohydrates plus sugar, so try to pick just one to treat yourself with. If you load up on the bread and pasta and fried potatoes, take a long break before you decide if you want to top it all off with apple pie and vanilla ice cream. If you know you'll want lots of dessert, stick to proteins, veggies, and whole grains during the main course so you can enjoy the sweets coma-free afterwards.

Whatever you do, don't beat yourself up too much. We all deserve a little splurge every once in a while.