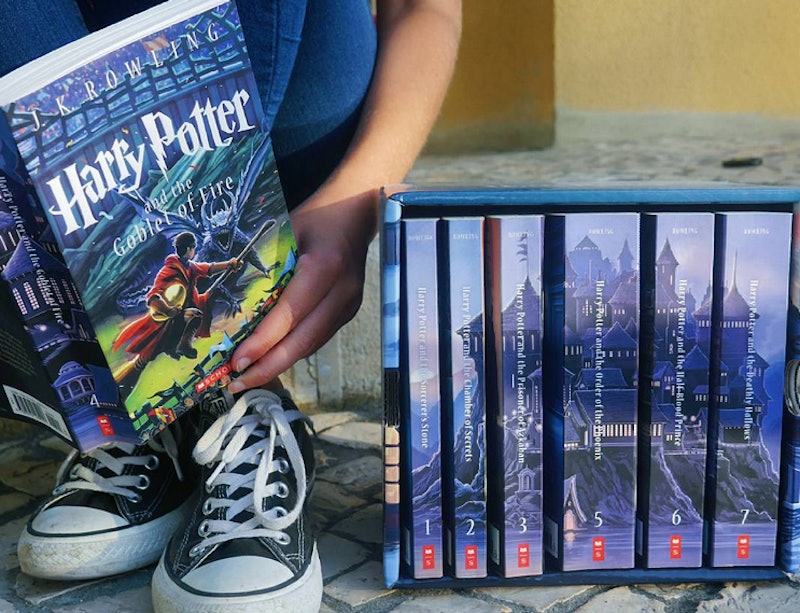 When it comes to writing a novel, inspiration is one of the first things you need to stock up on (along with industrial sized tins of coffee). Finding the java is the easy part, but the ideas are a bit trickier. However, using unique writing prompts can help you get started, and I've found that the best sparks of inspiration can be found in great books. And the Harry Potter series is more than full of magical inspiration to get you motivated.

J.K. Rowling offered you world of your own to escape to as a kid, and one that you can still call home. She may even be the reason you became a writer. Opening up any one of the books will always give you chills up your spine and bring a smile to your face. And because of that, I've put together a list of the best Harry Potter quotes and paired them with a writing prompt to get you started.

Your big challenge: Don't write fan fiction — write your own stuff! This is your novel, and even J.K. Rowling has said she was inspired by her favorite books as she wrote the Harry Potter series. Take a deep breath and get your quill and paper (or, well, Word document) ready, because inspiration is about to strike!

"Things we lose have a way of coming back to us in the end, if not always in the way we expect."

Writing prompt: Imagine a world where "lost and found" boxes transport people back into their past to find something they lost long ago, like a prized possession or family heirloom.

"I solemnly swear that I am up to no good."

Writing Prompt: Create a character who has sworn her life over to a society focused on doing evil in a world of good. Bonus: Create a foil whom she'll meet and clash with — but end up falling in love with.

Writing Prompt: A character has just found an old, abandoned library with every single book thrown off of the shelves, but still in good shape. The only thing all the books have in common is each one is missing its 394th page. What could it mean?

"I'm going to bed before either of you come up with another clever idea to get us killed — or worse, expelled."

—Harry Potter and the Sorcerer's Stone

Writing prompt: Place a boarding school in your hometown and imagine a group of students conducting the most epic prank to start out the year. This prank could be deadly if left in the wrong hands, so what happens next might not be so pretty.

"Let us step into the night and pursue that flighty temptress, adventure."

—Harry Potter and the Half-Blood Prince

Writing prompt: Imagine a character that has never stepped outside of her small, isolated town. When a group of strange-looking kids show up in her backyard one night, she's given the choice to keep living the simple life she's always known, or follow them into the night. What does she choose, and what motivates her decision?

"The mind is not a book, to be opened at will and examined at leisure."

Writing prompt: But what if it were? Create a world where a controlling government does annual "mind checks" to ensure safety and happiness while looking into human brains. What would happen when a couple of characters rebel against the procedure? Follow them throughout their journies.

"I don't go looking for trouble, trouble usually finds me."

Writing prompt: Start out with a character who has always had extraordinarily bad luck all of her life. When yet another terrible event happens, explain how she reacts differently for the first time ever.

"Not to be rude or anything, but this isn't really a great time for me to have a House Elf in my bedroom."

—Harry Potter and the Chamber of Secrets

Writing prompt: Instead of a House Elf, reimagine J.K. Rowling's quote with a different mythical creature — one that may exist, or one that you've created. Why is it a bad time for your character? Is he late to be somewhere, perhaps? Keep the stakes high.

"The prophesy said: neither one can live for the other one survives. It means one of us is gonna have to kill the other in the end."

Writing prompt: Imagine two young twins are told a similar prophesy, or just as threatening by their older sibling as a joke. Only one of them takes it seriously, and as they grow older, they begin to resent each other. Write the story in both of the twins' perspectives.