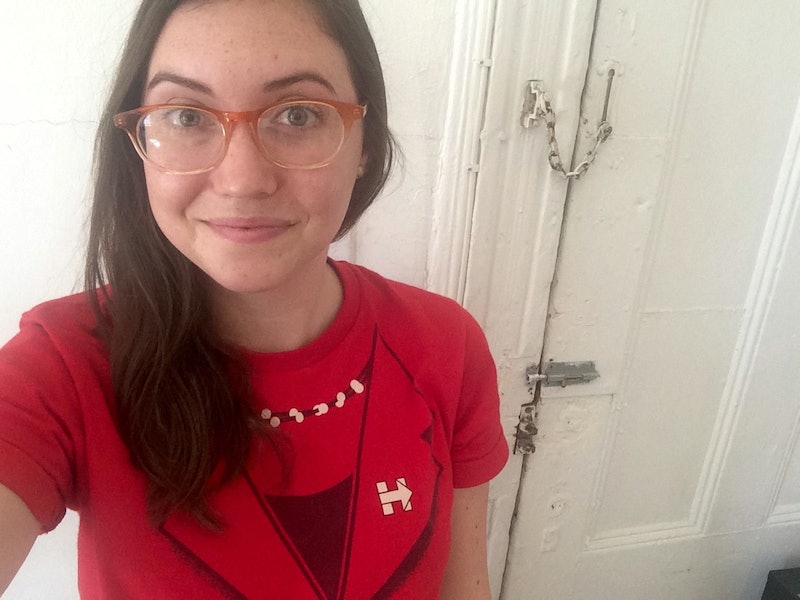 There's no denying that Hillary Clinton is the queen of pantsuits. No one else can rock the classic business attire quite like she can. She wears it so well (and so often) that it's become a part of her overall aesthetic, and an identifier for the presidential hopeful. Which made me wonder: Do people automatically associate pantsuits with Clinton? To test how many people recognize Clinton's signature look, I decided to wear a pantsuit and gauge how my friends, coworkers, and strangers responded. Luckily, Clinton has a pantsuit T-shirt in her campaign store, so I could mimic her look without donning a full three-piece suit in 80-degree weather. I wore Clinton's pantsuit T-shirt for five days straight, and surprisingly few people connected the dots.

Clinton's love of pantsuits is strong, and has been building for decades. Her very first Instagram post showed a rack of pantsuit options for the day (all in patriotic colors, of course), with the caption "Hard choices." She can make the look work for any occasion — sometimes making it more casual with a scrunchie and sunglasses. The Clinton campaign's pantsuit T-shirt is another casual take on the seemingly formal outfit. Its description reads: "Bringing a whole new meaning to casual Friday." The back of the shirt says "Pantsuit Up" (a play on How I Met Your Mother's "suit up," perhaps). And the pearl necklace keeps it classy — any time you want to make an outfit more Clinton-esque, add pearls.

Here's how I wore the Clinton-inspired pantsuit T-shirt each day, and how people reacted.

On my first day in the pantsuit T-shirt, I went to a coffee shop in my Brooklyn neighborhood to work, optimistic that at least one person would comment on my outfit choice. But sadly, no one noticed. Granted, this take on the pantsuit was much more casual than Clinton has ever attempted. Maybe my fellow coffee shop patrons weren't politically savvy enough to recognize the small Clinton campaign logo on my printed lapel. Or maybe they just didn't care. Either way, they said nothing.

On the second day, I went to lunch with a friend, who didn't comment on the T-shirt until I brought it up. After she commented on someone nearby wearing a Bernie Sanders shirt, I mentioned that mine was repping Clinton, and she said: "Oh, that's what it is? It's really cute!" It was hard to tell if she actually thought it was a cute shirt, or if she just felt obligated to compliment me.

Later that day, we went to Refinery 29's fashion week event, 29rooms (where the photo above was taken), and the pantsuit still didn't garner much attention, even among all the fashion-minded New Yorkers there. However, a woman working the exhibit asked if I was wearing a Houston shirt, mistaking Clinton's campaign logo for a reference to Houston, Texas.

At this point, I was used to wearing the pantsuit T-shirt every day and not getting much of a reaction. But I was a little worried about wearing it on a date to the MoMa. Sure enough, my man-friend commented on it as soon as I arrived, pointing at the shirt in confusion and saying, "What is this?" After I explained, he grunted in disgust and said, "I hate Hillary Clinton. I thought it was from a weird TV show I didn't know."

He half-jokingly made comments about me changing my shirt throughout the museum, asking how long I had to wear it. As we looked at silk screen prints of Jackie Kennedy, he said: "Silk screening is pretty easy. You could make yourself a new T-shirt." His hatred of Clinton was duly noted.

When I went to my job at a small wine shop later that day, my manager read the back of the shirt and said: "Pantsuit up? I don't know what that means, but I'm old." Once I explained that it was a Clinton 2016 T-shirt, another man in the shop said, "That's pretty cool. She has merchandise?" Oh yes, she has lots of merchandise.

On day four, I wore the T-shirt to the wine shop again, where multiple people confused it for a flight attendant uniform. A co-worker asked what the "H" stood for, not recognizing the campaign logo (apparently, it's not very well-known). After I explained that it was actually a Clinton T-shirt, a customer said: "I thought it was a flight attendant. I like her, though."

The most positive response I got all week was from a customer at the shop who works for Glamour. She said, "I like your shirt. I never wear anything fun, but I like it," explaining that she sticks to a minimalist style. She had no idea it was promoting Clinton, though.

My last day in the T-shirt was mostly spent writing at home, but I did venture to the grocery store, where no one commented on my outfit. Surprisingly, my roommate didn't even notice that I had worn the exact same T-shirt five days in a row. Or maybe she just judged me quietly.

I was happy to return to my normal clothes, but I did enjoy always feeling a little dressed up in my faux-pantsuit and pearl necklace. If you want to look as put-together as Clinton, but be as comfortable as someone who wears pajamas in public, the Clinton pantsuit T-shirt is the way to go. Not many people, besides your significant other, will even notice.

More unexpected than people not realizing that the T-shirt was supposed to be a pantsuit was how no one recognized Clinton's logo. It's not a huge focal point on the shirt, but it is pretty noticeable, and even people that saw the "H" didn't know it represented the Clinton 2016 campaign. Her campaign brand apparently hasn't yet reached that many New Yorkers — or at least, not the ones I interacted with.