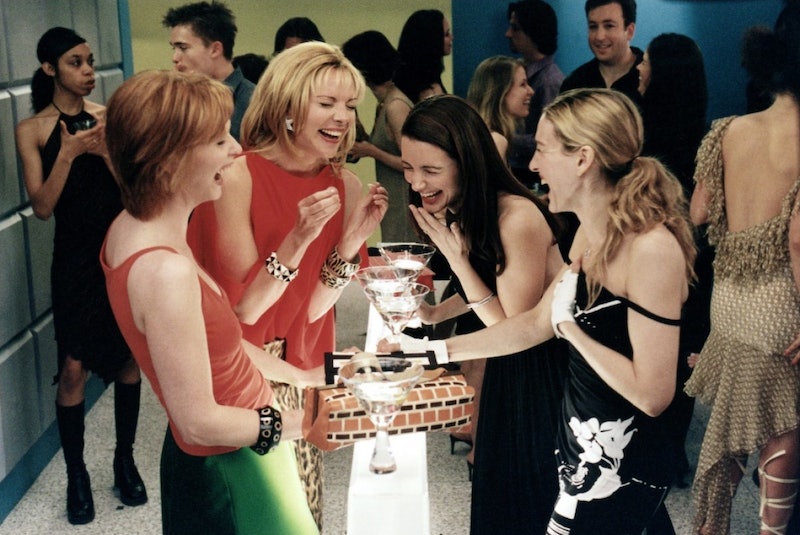 Every night, my roommate and I snuggle up in bed (we don't have a couch yet, shut up) and try to dissect the outfits... and politics... of fictional sex columnist Carrie Bradshaw. Sex and the City is just one of those cultural touchstones where you get to discuss crop tops and progressive values in one fell swoop, you know? And, for every potentially problematic episode, sartorially or otherwise, I'm always pleased to find some shining feminist moments in Sex and the City.

Now, granted, from a media critic perspective (i.e. 24-year-old with a a bachelors in journalism from Rutgers), I feel like Sex and the City is really categorized as a "post-feminist" work. Depending on your angle, its "feminism" could go either way. From my perspective, the show has always taken a positive look at female liberation while, perhaps more importantly, normalizing female sexuality in a way that makes it every bit as enjoyable to watch today as it was when the show originally aired.

At its core, Sex and the City was a hugely important show for women, and here are eight of the many reasons why its feminist heart is definitely there.

1. It Challenges Ideas Of Beauty

It's undeniable that Parker (and subsequently Carrie) has an unconventional look. Her c-c-c-c-curly hair and madcap outfits create such an iconic image, but, more importantly, they give her this sense of IDGAF-ness which is amaaaaazing. And important! We all know that Carrie would occasionally dress for men (see: the naked dress), but, for the most part, you really got the sense that she dressed for herself. Her style, in itself, is a powerful statement.

Aside from being of a similar socio-economic background, the only thing the girls had in common is guy problems and, well, each other. Miranda was a Type A career woman who liked boxy suits, short hair and cynicism. Charlotte was a Park Avenue princess who wanted a Princeton man and a penthouse. Carrie was a head-in-the-clouds dreamer who dreamed of being with the one she loved, and also finding the perfect pair of shoes in the process. And Samantha? She just wanted to be fabulous... and sometimes sex. Overall, while some core desires were the same (Samantha aside, they all ultimately zeroed in on monogamy), the ladies themselves were separate breeds.

True Life: the older a woman is, the less you're going to see her on a screen. It's garbage, but it's true. So it's a big deal to see four women in their deep thirties (and up) so celebrated. And, hey, you gotta love that moment in Sex and the City 2 when Samantha announces, "I'm fifty f*cking two ,and I will rock this dress." It's amazing to see her challenging age as a worthy contender.

4. It Gave The Ladies A Voice

Carrie has a popular sex column; you don't get more vocal than that. And Samantha would talk sex to anyone, as loudly as she was possible. Special props, to Miranda, though, who would sometimes get so incensed about sexism in the work place (or otherwise) that she would snap. Charlotte was also there.

Dude, I wish I could grab brunch with my three closest friends tri-weekly, but like 80 percent of them live across the country. Beyond that, though, the girls would always be there for one another, through thick and thin, New York to Mexico. You know how, in the first movie, when Carrie gets ditched by Big in that street altercation? And Charlotte holds her and goes full mama bear at Big, like, "NO?" There was a lot of that going on throughout the series.

6. It Put Ovaries Before Brovaries

Remember those nights where Samantha would turn down a dance because "It's just us girls tonight?" Samantha is a sex-addicted hedonist, but she's still loyal-as-hell and understands that sometimes you gotta put ovaries before brovaries.

7. It Went Up Against Slut-Shaming On The Regular

Samantha Jones exists to smash all gender roles and prove men can have just as much sex as woman... and shouldn't be judged based on that.

8. And It Forever Established That A Women Should Be In Charge Of Her Own Life

Many times monogamy was solidified as an endgame. But, overall, the show asserted many times that it was OK to be a single girl, it was OK to not want children, and it was OK to pursue a traditional lifestyle, too, if that's what made you happy. A woman's right to choose was always in the forefront, whether it regarded abortion or buying $400 shoes. Sex and the City isn't perfect, but it insists that women can be independent, and more than that, independent together. And that isn't just feminist, it's fabulous.

More like this
Daryl McCormack On His Unusual First Audition With Emma Thompson
By Olivia-Anne Cleary
Adele’s All-Female Lineup Includes Kacey Musgraves, Mahalia, & Self Esteem
By Shahed Ezaydi
The Umbrella Academy Cast Breaks Down That Wild Season 3 Finale
By Gretchen Smail
Viktor Hargreeves’ Coming Out Scenes Are The Sweetest Part Of Umbrella Academy Season 3
By Gretchen Smail
Get Even More From Bustle — Sign Up For The Newsletter