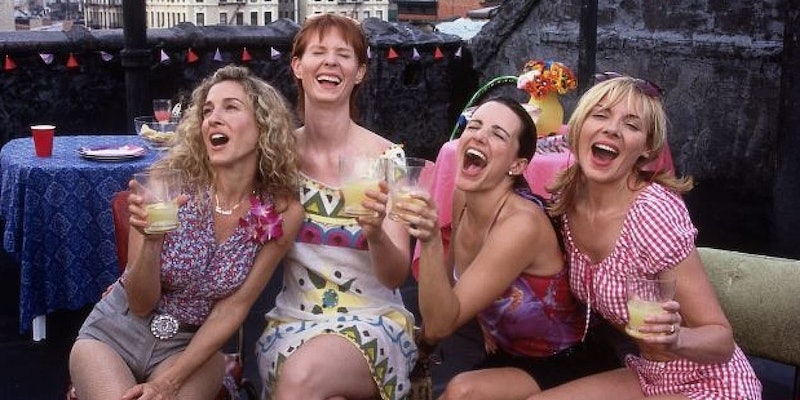 One of my favorite shows ever happens to be Sex And The City , a fact that often surprises people who know my commitment to all things queer and feminist. Yes, one could argue that Carrie Bradshaw perpetuates a gender binary as she soliloquizes into the pre-Twitterverse about not understanding men. Yes, the show fetishizes shoes, and material objects like clothing and makeup seem to play hugely important roles in the ladies' (especially Carrie's) lives and personalities. Let's not forget that all four protagonists are also cisgender, straight, white, able bodied, and slender. SATC definitely gets a failing grade in the representation department.

But I do feel a bit defensive whenever anyone attacks the show. I'm very attuned to the ways in which SATC is problematic, and don't excuse the show for any of its shortcomings, but perhaps why I feel the need to defend it is that in my years watching, I definitely managed to learn a lesson or two from each of the characters. These lessons concern emotional vulnerability, career empowerment, and sex positivity, which became intrinsic parts of my identity and feminism.

Here are some of the diamonds of wisdom that I've gleaned from the arguably rough territory of problems and exclusions.

1. You Can Love Fashion & Still Be An Empowered Individual

Carrie's obsession with designer shoes and her commitment to her closet do not in any way decrease her chances of being taken seriously by her friends or fans. A love for clothes can often be translated as "vanity," and it's not often acknowledged that dressing oneself can be an act of empowerment and expression. Fashion liberates Carrie and helps her confidently express herself throughout the show and at any fancy event she is invited to that week.

2. Be Proud Of Your Career & Don't Compromise It For Anyone

All four women have high power careers: Miranda as a lawyer, Samantha as the owner of a public relations company, Charlotte as the director of an art gallery, and Carrie as a hugely successful writer. Time and time again, they express the importance of their careers and independence, how they balance them with their sex and/or family lives, and (arguably most importantly) that no man should ever get in the way of them. In Episode 10 of Season 2, Miranda dates a man who earns less money than her and is intimidated by her high-power job, leading to their eventual breakup. In the episode, she tells the girls over lunch, "When a single guy has money, it works to his advantage. But when a single woman has money, it's a problem to be dealt with. It's ridculous! I want to enjoy my success, not apologize for it."

Carrie dealt with a similar situation in Season 5. Her boyfriend Jack Berger was a perfect example of a man unable to handle the successes of his feminine partner. Working with the same publishing company, Berger was not quite as successful as Carrie, who had just gotten a major book deal and a huge cash advance. When he brought up his insecurity about the subject, Carrie maintained that she had the right to proudly show off her accomplishments. As the tension built surrounding their comparative work and success (made worse when Carrie noted that a character in his book was wearing a scrunchie), Berger left her a post-it breakup note. Similar to Miranda, Carrie stuck to her guns and didn't compromise her career or pride for anyone, which was hugely inspiring to me.

3. Infertility And Abortions Are A Part Of Life & They Deserve Discussion

Charlotte experiences ongoing struggles with conceiving a child, which initially started with her first husband's inability to hold an erection. She soon discovered she had infertility issues of her own and later went through numerous rounds of IVF. Charlotte eventually conceived a child with her second husband and former divorce attorney Harry Goldenblatt, which was followed by a devastating miscarriage. She talks about these experiences a ton with the other three characters, and they all offer support even when times are particularly trying (like when Charlotte got upset with Miranda for conceiving a child she wasn't planning on after one try). Charlotte remains amazingly resilient throughout the show, and unexpectedly conceives after adopting her first child.

Perhaps more controversial is SATC's willingness to talk openly about abortion, though. In Season 4, Miranda gets pregnant and considers getting an abortion. Both Samantha and Carrie openly discuss their diverse experiences with abortion sensitively and candidly (Samantha has had two that she doesn't regret, and Carrie has had one and hasn't felt the same since). By the end, Miranda decides to keep the baby, making the episode super great for de-stigmatizing abortion, and hitting the message home that the power of choice for every individual is highly important.

5. And It Is Perfectly OK To Be A Sexually Active Single Woman

The way the ladies are portrayed as single, thriving, and sexually active human beings with desires and kinks of their own was also pretty groundbreaking for TV at the time. Every character had total agency over their sex lives, and discussed sexual exploits and preferences with each other (often over lunch). Like in Season 3, when Samantha announced, "I'm a 'try-sexual.' I'll try anything once."

There was rarely any slut shaming among the women, and their collective demand for pleasure to be reciprocated and for their orgasm to be prioritized was always felt throughout. This was one of the first shows I saw that portrayed women as being just as sexually promiscuous and empowered as men on TV. The show really helped me demand my own pleasure in the bedroom, and taught me not to be shy or afraid about asking a partner to do something different in order for me to achieve orgasm. Unfortunately, queer sex is completely underrepresented in the show.

6. Your Feelings Are Important

SATC features a ton of emotional talks, many tears, lots of "looking out the window contemplating life" scenes, and many instances in which the women demand their happiness and feelings be prioritized. Absolutely none of it was in jest, or framed to mock the "fragility of women."

SATC successfully conveyed how important it is to validate yourself and talk about your feelings without losing any power along the way. Carrie in particular discussed and analyzed her feelings at length (often through her writing), and she took great steps to be better at self care. After reflecting on her feelings through writing at the end of the day, she always does what's right for her, no matter how difficult it may be, and even if it means breaking up with a boyfriend or declining a job offer. Despite the promise of potential opportunity, Carrie isn't afraid to jump into the abyss of the unsure but ultimately healthy choice after much self-reflection, which is ultimately the strongest and most empowering thing one can do.

Samantha is an absolute queen throughout the entire show, but she impresses me the most in the Sex and the City movie. She's in a loving and committed relationship with Smith Jerrod, her longtime (and much younger) boyfriend. Although she has the life she thought she'd always dreamt of, in a beautiful West Coast house with her monogamous partner, she realizes that it's not what feels best or most natural to her.

She talks to the women about how she feels she is growing further from herself by being in this relationship, and is also not completely satisfied in a monogamous situation. At over 50, she wasn't feeling happy enough with her personal and emotional progress, and knew she needed time alone to achieve that. So she makes the heart-wrenching decision to break things off with Jerrod.

This was obviously inspiring in the "I don't need a partner" department, but was also super important for people, with or without a partner, to see the importance of evaluating whether or not they are staying true to themselves and doing what's best for number one (aka yourself!), even if those things are super hard. Samantha's decision and general attitude definitely helped me navigate who was and wasn't right for me in the dating world over the past couple of years, and to be in a relationship that doesn't compromise my relationship with myself or my preferences/values.

Although Sex And The City had its downfalls, its intrinsic value shouldn't be belittled. The reality is that the four protagonists inspired a lot of people to feel more at ease and even liberated in their own lives. At least it did for me.