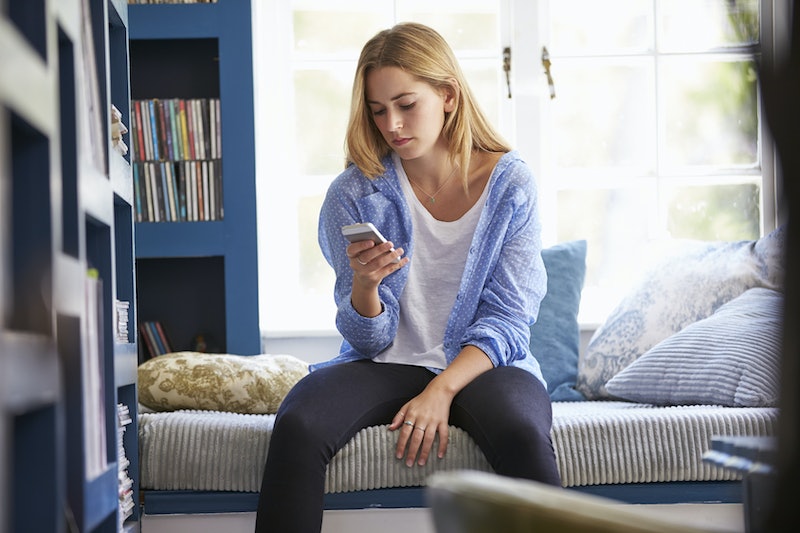 Technology has completely changed the dating game. Long gone are the days of anticipating a phone call from someone in whom you’re interested, because now we have texts with which we have to deal. Since the struggle of waiting to get a text from someone you like is very real, queer filmmaker and figure skater Tommy Do has created a short film, entitled "Hell," to accurately convey exactly what it’s like to wait to get a text from someone you like or had an awesome date with, but you’re not sure what’s next. The title, "Hell," of course, is the most appropriate name in the world for this entire process of waiting on someone to text you back.

"I find when two people are courting each other there's always a very clear mating dance. 'Texting' is just the arena the dance takes place in. It's like whoever gets the last text gets the most power. I withhold texting people back all of the time just to pretend like I have control over the situation or my feelings. But the reality is we're all eye fucking our phones all of the time, so I'm not sure who we think we're fooling."

This is so true, and anyone who has ever sent a text that went unanswered, either for an extended period of time or, in the worst-case scenario, forever, knows it to be true. Do really hits the nail on the head with this short film. From that first text to the “hell” in between to the end result, here are 11 things that happen when you’re waiting on a text.

1. Struggling To Initiate A Dialogue

Whether it's the morning after a date or just a random text you want to send to get things going with someone you really like, finding the right words is sooo difficult. Is "hey," going to cut it? Should you pay them a compliment? Maybe ask them what they're up to? But what if they take the latter as an invitation for sex when you just legitimately want to know what they're doing? AH! So many mixed messages!

2. Carrying Your Phone Around With You Obsessively

Although, to be honest, we're all guilty of carrying around our phones obsessively as it is, it's amazing how even more obsessive we become when we're waiting for a text. Even if we have the ringer on as loud as it will possibly go and you know you're going to wait an appropriate amount of time before even responding to the text, you need to take that phone into the loo with you just to be safe.

3. Trying To Pretend You’re Not Waiting

It's not like you're hungry, but in cooking yourself an omelet, for example, you'll be focusing on something else. Although will you really be focusing or just trying to convince yourself you're not obsessing? Don't chop off a finger with all that distraction in your brain!

4. Double Checking To Make Sure You Had Hit 'Send'

5. Trying To Distract Yourself With Everything And Anything

Fancy a swim? Maybe you can hit up the gym? Oh, look there's a sale at Barney's and you certainly need to try on every shoe in the store!

6. Double Checking To Make Sure Your Phone Is Working

As is the case with phones, sometimes they just stop working. They just do. For no good reason at all, they just cease to work. It happens all the time.

7. Turning It Off So You Can Ease The Anticipation

Because if the phone is off, you can't obsess. What you can do is assume that the text has come in while the phone was off and you'll get it later when you're done being so "busy."

The best thing about naps is that you get to sleep your day away. Before you know it's three hours later and therefore closer to receiving a text ― maybe? It's like you sped up time by just getting a little shut-eye.

9. Holding It Up To Make Sure You're Actually Getting Reception

Maybe there's a cell tower down in your neighborhood? You should probably stand on a chair with your phone in the air to make sure you're getting maximum reception. I mean, maybe that's why you haven't heard back from them all day ― you haven't had any reception.

10. Finally Getting A Response

It's a jolt to the system, isn't it? You get a combo of nerves and excitement, before you can actually enjoy that you've finally received a response.

11. Feeling The Wave Of Relief That Only A Received Text Can Bring

And breathe... feels good doesn't it? You've only waited some eight hours, fully knowing the person you texted was next to their phone the entire time (because we all are at all times), but it still feels nice to be recognized.

Now, how the hell will you respond after analyzing the text for at least 40 minutes?!