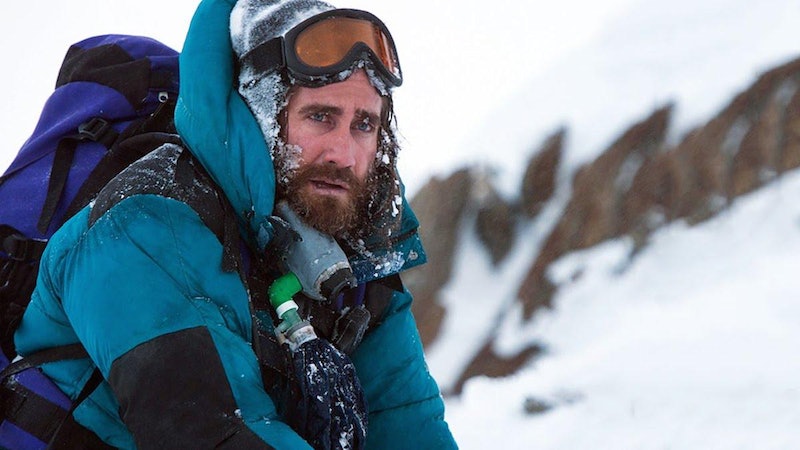 As of late August, Mount Everest is re-open for climbing business. An earthquake and subsequent avalanche on April 25 shut down all attempts scheduled for the Spring 2015 season. Much, much worse, the natural disaster also caused thousands of deaths and injuries among climbers, guides, Sherpas, and Nepalese and Tibetan citizens. While those countries still deal with the aftermath of that tragedy, the tallest mountain on Earth is again welcoming adventurers to its peak. The change comes just in time for the release of Everest, a cinematic re-telling of an infamous 1996 expedition to the top starring Jake Gyllenhaal, Kiera Knightley, Josh Brolin, and more. Should this movie move your adventurous spirit, it is possible to seek out one of those precious climbing permits. But what else would you need to survive an Everest climb?

The resource site Explorers Web recommends that aspiring Everest climbers begin the process of securing their permits at least six months in advance of their expedition date. They also advise that individuals hook up with a trekking agency that knows the paperwork well and can help advise and expedite. Once you've maneuvered around the red tape, the real preparations can begin. Obviously, you can't just wake up one morning and decide to scale Everest (even if your pull-up count is the best it's ever been). Here are six things you'll need to do to prepare to survive a trip to the summit:

And that's before gear, travel, and supplies. Climbing Everest isn't free. Each climber pays the Nepalese government a fee to set foot on the mountain. On the bright side, the fee has dropped significantly, even for the peak season.

2. Team Up With The Experts

Guided expeditions like RMI's provide climbers with a full team of support. If you can afford it, RMI will set you up with climbing guides, Sherpas, cooks, a medical team, and tons of information about physical preparation and gear requirements.

3. Get In The Best Shape Of Your Life

You've got to drag that body up 29,000+ feet of snow and ice; this trip is no joke. LiveScience recommends an immediate start to a regular fitness regimen, designed to increase endurance and get ripped.

To build muscle and cardiovascular strength (you'll need that as oxygen levels drop by nearly 70 percent from sea level) run, walk, bike, swim or hike for at least 45 minutes to an hour a day, four to six days a week. Carry a weighted pack to build endurance you can start at five pounds and build until you're able to ascend 3,500 feet carrying 65 pounds in less than three hours.

4. Do Not Skimp On The Gear

Now is not the time entertain your fondness for consignment shopping. A climber's gear can mean the difference between life and death. RMI has a handy checklist of recommended pieces of equipment, including everything from weather-resistant sleeping bags to ice axes to antibiotics.

In order to climb Mount Everest safely, expeditions can last about two to three months. Taking proper precautions isn't optional, nor is setting up safe base camp, treating injuries well, or taking time for adequate rest.

6. Let The Forecast Be Your Guide

This is huge. Weather is the most important variable in an Everest climb, and should be treated that way. Explorers Web warns adventurers to respect the power of the peak's weather conditions:

Check the weather forecasts, see that you understand them, take them seriously and don’t allow yourself to get false security in large numbers of climbers.

But forecasts aren't the end-all authority on a summit like this one where weather can become deadly with little warning. "Trust forecasts for general weather system predictions," the site councils, "but always keep an eye on the mountain."

Overall, a climber needs a very clear grasp of his or her own limitations and abilities. The climber fatality rate has fallen with the advancements in technology, weather-mapping, and climbing gear, but the trip is still an incredible test of fortitude, fitness, and determination.