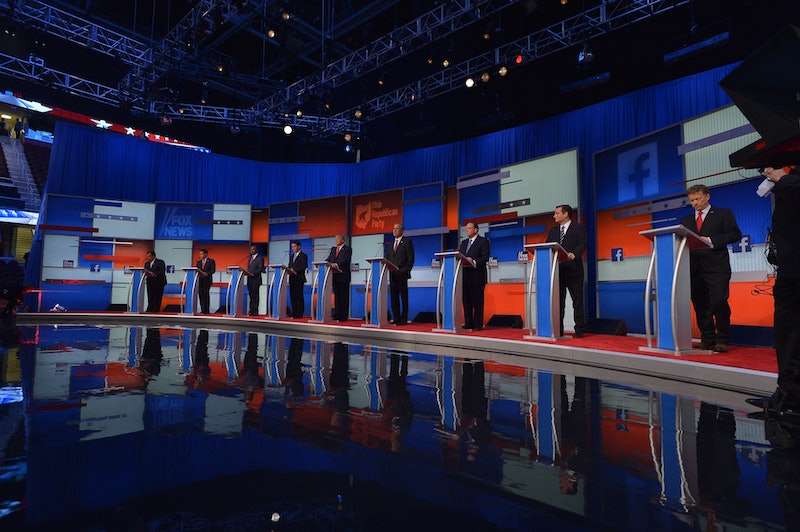 Republican presidential hopefuls will take to the stage on Wednesday for the second GOP debate of the primary season. And just like the first debate, there are too many candidates for everyone to participate. CNN, which is hosting the event, only allowed the top 10 candidates (based on an average of national polls) to join the prime-time event. However, because Carly Fiorina ranked in the top 10 in polls conducted after the Aug. 6 debate, she was invited to participate. That means that there will be 11 candidates in CNN's main forum this week. But who's not in the second GOP debate?

CNN announced the debate lineup Thursday evening, and Rick Perry, Bobby Jindal, Rick Santorum, George Pataki, Lindsey Graham, and Jim Gilmore didn't qualify for the prime-time slot. Perry, Jindal, Santorum, Pataki, and Graham qualified for an earlier forum, with an average of one percent support in at least three polls. However, Perry suspended his campaign on Friday, after he didn't make the main debate once again, so that's one less candidate to worry about. Jim Gilmore, who only had one percent support in one poll, won't be in either debate.

Sitting on the sidelines of the major GOP debate doesn't bode well for Jindal, Santorum, Pataki, Graham, and Gilmore, as none of them made the cut for the August debate, either. Here's what this setback means for each candidate not on the prime-time stage.

Louisiana Gov. Bobby Jindal polled at an average of 1.057 percent of Republican support in national polls. In polls conducted after the Aug. 6 debate, he only had 0.56 percent of support, which means he's losing followers. If Jindal doesn't perform well in Wednesday's forum, his support will probably continue to dwindle.

Rick Santorum, a former Pennsylvania senator, had an average of 1.214 percent of support in the relevant national polls used by CNN, and an average of 0.8 percent after the last debate. Like Jindal, Santorum's losing what little momentum he had in the election, and there's not much to be optimistic about — unless he stuns everyone at the underdog debate on Wednesday.

Former New York Gov. George Pataki polled at 0.529 percent in national polls, and 0.44 percent since Aug. 6. His numbers didn't drop drastically, but that's mostly because he wasn't doing well to begin with; an average of less than one percent doesn't look promising.

In the averages of national polls, South Carolina Sen. Lindsey Graham received 0.471 percent of support, and an average of 0.28 percent in the most recent polls that CNN evaluated. Out of 16 total Republican candidates, Graham is ranked as second to last, and even his military expertise might not be able to resurrect his campaign.

Jim Gilmore, the former governor of Virginia, didn't even qualify for the earlier CNN forum, as he only mustered one percent of support in a single poll. He was better off when people thought he was a character in Gilmore Girls. But despite his incredibly low polling numbers, Gilmore told Fox News Radio that he's in the presidential race "all the way." He may have a lot of enthusiasm, but he's still at the very bottom of the GOP totem pole, with little chance of becoming president.