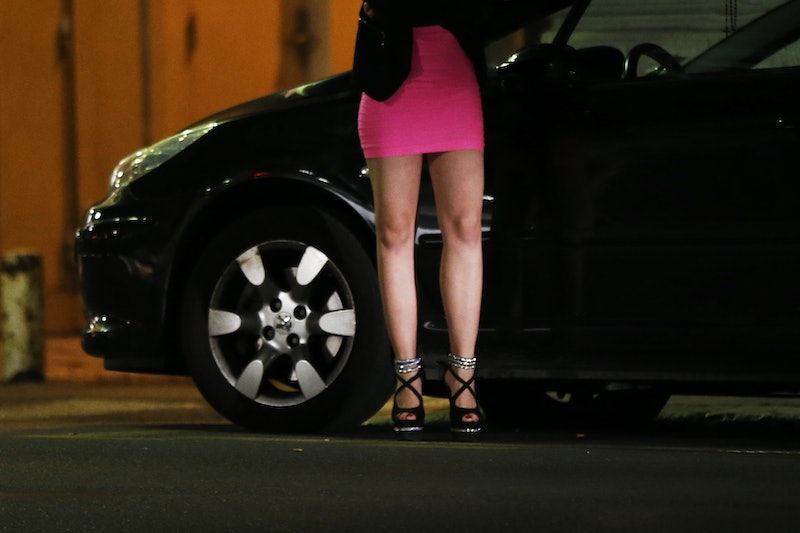 This weekend, Chicago Sun-Times columnist Mary Mitchell ran a piece in which she argued that the rape of a sex worker (sorry, Mary, "prostitute") should be classified as "theft of services." If that phrase is giving you déjà vu, you may be thinking of Municipal Judge Teresa Carr Deni of Philadelphia, who used the same term in a gang rape case in 2007. Sex workers: Not people, evidently. The persistent belief that sex workers cannot be raped is deeply disturbing, and the Internet is rightly furious over the piece, as were many Sun-Times readers, who provided an eloquent series of letters to the editor.

The Sun-Times has been in hot water over a wildly offensive piece before. Just last year, the paper published "Laverne Cox is Not a Woman," an opinion piece syndicated from the National Review. The Internet's response was equally furious, and the paper was forced to apologize for the column under pressure from members of the public and organizations like GLAAD. Now, the paper is at it again, highlighting some profound problems on the editorial board, which has not publicly discussed the situation (Sun-Times staff did not respond to Bustle's request for comment prior to publication).

The sex worker discussed in the editorial claims — the case has not been decided in a court of law — that she made an agreement with Roy Akins via Backpage.com for a session that would cost $180. When she arrived at his home, he allegedly raped her at gunpoint. At the time of his arrest, police say, he confessed to the crime. The case is eerily similar to the 2007 gang rape, in which the victim was also raped at gunpoint. Violence of this nature is a serious and very real risk for sex workers, thanks to the criminalization of their profession — it is difficult to protect yourself and find a safe work environment when you can't openly discuss your job. This would be one reason why Amnesty International just advised for the decriminalization of sex work in a policy report.

"I imagine most prostitutes in this situation would have run straight to a pimp," Mitchell says, using terms many sex workers consider offensive and deprecated at this point, including "prostitute" and "pimp," highlighting the fact that she doesn't consider the humanity of sex workers, but the terminology she uses is almost the least of her problems. The columnist genuinely believes that contracting "services" is a form of free consent to any and all sexual activity, and that you can't be raped if it happens in the course of your professional work and your job is illegal, evidently. It's clear that she has a grave, and dangerous, contempt for people who make their living through sex work, and her attitude is shared by much of society at large, which is why violence against sex workers is so common, and why it's so difficult to prosecute.

"Unfortunately," she writes, "the way this case is being handled makes it look like sex trafficking is a legitimate business," dismissing the sexual assault allegations by way of taking a dig at sex work. "I’m grateful [the accused] isn’t being accused of snatching an innocent woman off the street," she adds. Because evidently sex workers are asking for it.

Mistress Matisse, a Seattle sex worker and commentator, has some pointed words on the subject:

In an era when we're talking about sexual assault and the increased need for enthusiastic consent and open discussions about sexuality, views like Mitchell's are incredibly damaging. Mitchell is reinforcing the myth that if you consent to sex once, or at the start of an encounter, it's a blanket ongoing permission, which it is not. Any party can withdraw consent at any time, for any reason.

Namechecking Backpage.com was also a very pointed and deliberate decision. Anti-sex work campaigners, including a number who identify themselves as feminists, claim that all sex work is exploitation and insist that they're saving sex workers from trafficking and abuse by attempting to shut the industry down. The rescue industry, as it's known among sex workers, has a particular antipathy towards Craigslist (pressured into shutting down its sex work advertising services in 2010), Backpage.com, myRedBook.com (targeted in 2014), and Rentboy.com, which was recently in the news in the aftermath of a major law enforcement raid.

"They" just need, you see, to be saved from themselves.

Sex workers have repeatedly rallied around such sites, arguing that they don't just provide a professional service, but also a safety net. By getting to know each other through advertising services, sex workers can create a network to help each other out when they're in need, to protect each other from violence, to warn each other about abusive clients. An anonymous writer for The Guardian comments that such sites provide an empowering economy for sex workers — not a mill for human trafficking, contrary to popular belief.

"I imagine most prostitutes in this situation would have run straight to a pimp. But after leaving Akins' home in the 1100 block of North Lawler, the unidentified 24-year-old woman called the police," Mitchell writes, suggesting that this sex worker shouldn't have wasted valuable law enforcement resources over her petty theft of services concerns. She continues to grudgingly admit that: "I don't have one iota of sympathy for Akins' plight," referencing his $750,000 bail and sexual assault charges. Because being accused of rape is a "plight."

Phew. Not like this case involves an actual rape. We're back to the "rape-rape" or "real rape" stereotype that the only thing we can seriously regard as rape is when a stranger violently assaults someone. Despite the fact that Department of Justice statistics indicate that 82 percent of reported rapes are perpetrated by someone known to the victim, and that many rapes do not involve physical violence. She doubles down on the notion that rape must involve a violent stranger in order to count later in the piece when she writes that: "Earlier this month, we saw what a rape victim looks like. Melissa Schuster, 26, of Willowbrook, was stabbed 17 times and suffered a fractured nose, broken bones and eye injuries when she was raped by a man who broke into her home after demanding cash. ... Schuster did nothing to bring about this terrible, terrible ordeal."

The dehumanization of sex workers endangers them — in a society where people don't care about sex workers, rapists seeking victims identify them as easy targets for assault.

"I’m not one of those women who believe rape victims are at fault because they dressed too provocatively or misled some randy guy into thinking it was his lucky night," she writes, hastening to assure the reader that she's not a monster.

Yet, Mitchell believes that sex workers are responsible for their own rapes. "When you agree to meet a strange man in a strange place for the purpose of having strange sex for money, you are putting yourself at risk for harm. It’s tough to see this unidentified prostitute as a victim. And because this incident is being charged as a criminal sexual assault — when it’s actually more like theft of services — it minimizes the act of rape." (Emphasis mine.)

I'm sorry, but it minimizes the act of rape to call a rape a rape? We're really going there, coming from a woman who minimizes the experience of a victim by referring to what happened to her as "theft of services?"

Would that Mitchell were alone in this opinion, and would that the Sun-Times understood how dangerous this kind of commentary is for sex workers. It isn't the only newspaper that reports unfavorably on sex workers and repeats harmful social attitudes about sexual assault and sex work, in addition to praising the rescue industry's efforts. This occurs despite the fact that sex workers are fighting for their place in the media, as occurred earlier this year when many were outspoken about criticizing celebrities who opposed the Amnesty International findings on decriminalization.

The dehumanization of sex workers endangers them — in a society where people don't care about sex workers, rapists seeking victims identify them as easy targets for assault. The awareness that sex workers can be raped and need additional protections due to their vulnerability has been a slow process; Amsterdam, famous for its heavily regulated sex industry, just instituted better alarm systems for sex workers in 2014. It also means that sex workers often have little to no say in legislation affecting their lives and careers. New Zealand, which is experimenting with radical sex work-centered legislation, is one of the few exceptions to the rule, and the nation has seen a marked improvement in safety and working conditions for its sex workers. The model put forward by its sex workers is an example of progressive legislation, but it can't be repeated if society doesn't think that sex workers are worth protecting.