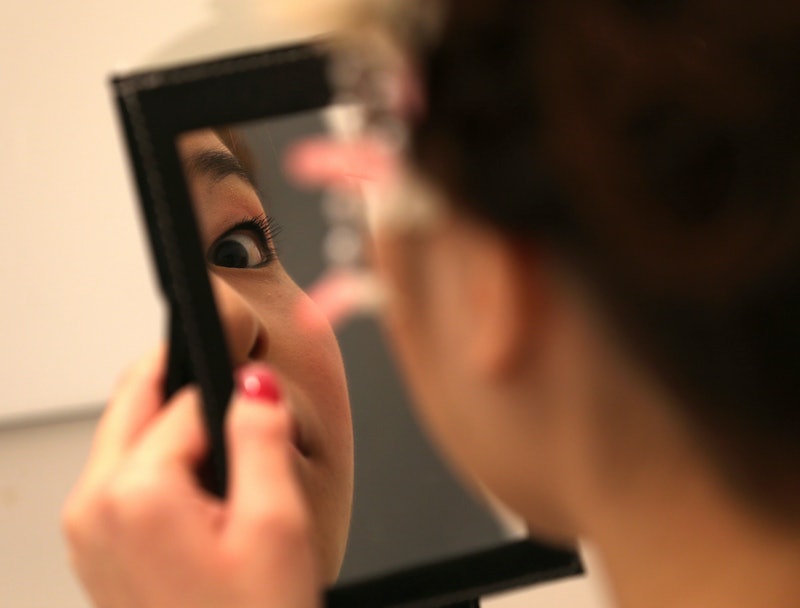 Sex work is not the same as trafficking. That's the message many sex workers are trying to get across on Twitter as January, which the White House has named National Slavery and Human Trafficking Awareness Month, comes to an end. We hear about sex trafficking in the news all the time — whether its the story of an underage girl who was brutally raped by multiple men, or another story about how the Super Bowl is the single biggest sex trafficking event across the United States.

But this year, many sex workers have interrupted this narrative and refocused it on what they see as one of their biggest obstacles: the many anti-sex trafficking NGOs that believe sex workers need to be "rescued" from sex work.

At the beginning of January, a loose coalition of sex workers and allies got together virtually to decide on a hashtag that would give this issue visibility. They finally decided on the hashtag #NotYourRescueProject. The two main faces behind the hashtag are N'Jaila Rhee and Molli Desi, both of whom are sex workers. They consulted with sex worker rights advocate Melissa Gira Grant and activist Suey Park of #NotYourAsianSidekick fame. Within a few days, the hashtag was trending.

Nearly a month after it began, #NotYourRescueProject is still going strong.

Rhee, who runs the blog BlasianBytch.com, tells Bustle that her experience as a sex worker and woman of color was one of the many inspirations behind her efforts to start the hashtag.

"During #NotYourAsianSidekick, one of my tweets that got retweeted a good amount was when I spoke about how in communities of color — especially the ones I’m in, which are black and Asian — there’s a lot of hostility to women who are sex workers," Rhee says.

Rhee says too often, people assume sex work cannot be the result of a conscious decision. She is very sympathetic to the plight of trafficked individuals — particularly underage youth — and advocates intervention for them. But the purpose of #NotYourRescueProject was to make a distinction between who needs intervention and who doesn't.

"Every time someone talks about human trafficking, many conflate human trafficking with sex work...When you say sex work is all violence against women or is all sex trafficking, it really ignores agency for women who chose sex work," Rhee says. "I didn’t fall into sex work. It was something that I chose out of my own volition."

Desi, who works as an escort, is highly critical of anti-trafficking NGOs.

"I believe it is very important for sex worker voices from the emerging world to be heard unmoderated by any special interest," Desi says. "I believe enabling sex workers with rights and especially the right to organize their own resistance is what is most needed."

Desi acknowledges that many women have suffered abuse in sex work but she sees it more as a consequence of "sex work being a marginalized occupation."

Desi and Rhee say that sex workers' voices have been long excluded or distorted to fit the agenda that sex work is not a valid choice.

#NotYourRescueProject helped sex workers across Twitter voice their opinions. But soon enough, a counter-hashtag was trending: #RealJobsNotBlowjobs. It wasn't coordinated specifically by the rescue industry but rather by a loose group of anti-sex work feminists.

Eventually, though, it was taken over by sex workers in opposition:

@GunnvorValkyrie, the woman who started #RealJobsNotBlowjobs, spoke to Bustle over email on the condition that her name not be used. She calls herself an ally to "prostituted women."

While @GunnvorValkyrie was the first to use the hashtag, she says her colleague, former sex worker Jacqueline Homan, coined the term. Jacqueline Homan did not respond to multiple requests from Bustle for an interview.

This brand of anti-sex work ideology is espoused by a small community of radical feminists who call themselves "radfems" — some of whom condemn all penetrative sex.

While @GunnvorValkyrie's ideology certainly aims to help sex workers rather than criminalize them, ignoring the distinction between "sex trafficking" and consensual sex work has a touch of condescension. It reflects exactly the mentality Rhee and Desi want to combat: the desire to rescue sex workers when they don't need or want rescuing — especially when some of them are more than happy to gain up to $70 an hour from sex work, and prefer that to "working at McDonald's and making eight dollars an hour," as Rhee puts it.

Human trafficking involves commercial sex acts or labor or services that are induced through force, fraud, or coercion.

However, a number of other organizations, from Nightlight International to the Asian Women Coalition Ending Prostitution, make it their mission to "end prostitution." For them, there is no distinguishing "sex trafficking" from "sex work" done out of choice.

Law enforcement has been criticized as well for criminalizing sex workers. Last month, in an article for Medium, "The Red Light and the Cloud," Melissa Gira Grant detailed a conversation she had with an FBI agent that was targeting a messaging board escorts frequented.

“We set up these types of operations to see if any of the females that are in this line of work are a victim of human trafficking,” their media coordinator wrote to me. Speech meant for women’s own protection had been flagged as a potential threat.

I asked the FBI spokesman, “Was that the case — that these women were trafficking victims?”

No, he replied. “They were not trafficking victims in these cases.”

Some organizations, like The Sex Workers Project, help both people coerced into the sex industry and people who freely choose to work in it.

"Many of our clients want help leaving sex work and we help them with this," Sienna Baskin, co-director of SWP, tells Bustle. "Many of our clients do not seek to leave sex work, but need help with other problems in order to increase their safety and stability. We are not imposing our own goals or requirements on our clients, but creating a safe space for them to pursue their goals."

More like this
We’ve All Had Bad Sex. Nona Willis Aronowitz Is Talking About It.
By Sophia Benoit
'The Capture' Is Finally Back – & S2 Looks Tense AF
By Sophie McEvoy and El Hunt
The Lionesses Are Calling For Equal Access To Football In Schools
By Sophie McEvoy
Dunkin’s Pumpkin Spice Latte Is Officially Back This Week
By Mia Mercado
Get Even More From Bustle — Sign Up For The Newsletter