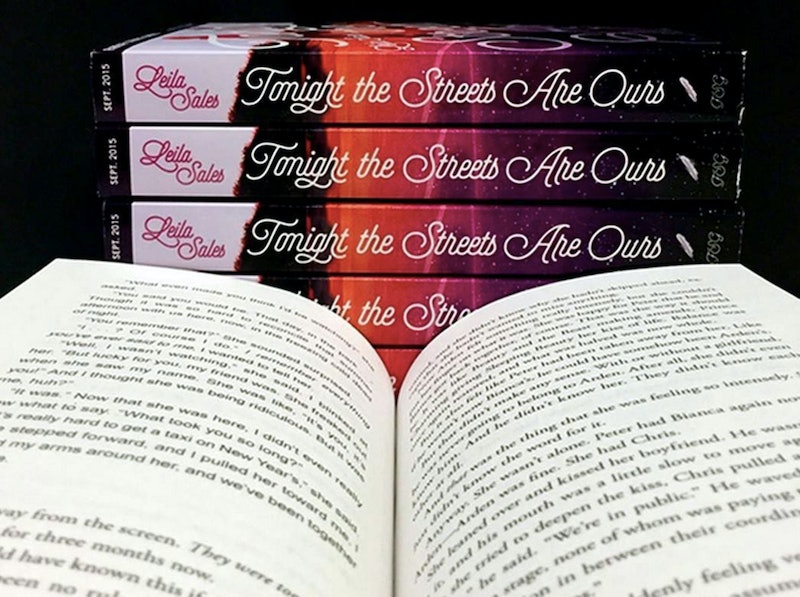 You're more likely, though, to see me using social media for the following things: learning when my friends have run their first marathons, or gotten engaged to the man of their dreams, or won important writing awards, or purchased beautiful homes. Oh, and feeling bad about myself as I dwell on the realization that Rachel from college has earned her Ph.D in the time it’s taken me to figure out what day of the week I’m supposed to put out the trash. There's also the very common use of me posting my own accomplishments, in the hopes that, by sharing them with many other people and getting their approval, my achievements will feel less hollow.

However, for every unreal accomplishment we've Liked, we should know by now that everyone lies on the Internet. Because we all lie on the Internet. Yet somehow we keep believing that the pretty pictures other people paint of their lives are actually real, and that we must be the only ones in the world who burned dinner after wasting all day playing iPad games. That is not, I repeat, NOT the case.

That misconception is the topic of my new novel, Tonight The Streets Are Ours . The story is about a girl, dissatisfied with her own life, who becomes obsessed with the witty, romantic, sophisticated musings of a teen blogger. Ultimately, she and her best friend set out on a road trip to New York City to find him. Over the course of one epic night together, she realizes that he’s not exactly who she thought he’d be based on what he wrote about his life.

It’s not that this blogger told falsehoods outright — like, he’s not actually a middle-aged serial killer — but he lied the same way we all do online: by omission. So, today I thought I would try to be honest, and let you in on some of what I omit from my own online persona.

First, we have this one, #Provence (could there be a more braggy hashtag?), from the bike trip that my mother and I took around France, because we are extremely world-adventuring and athletic.

Here is what I failed to mention:

On day one of our bike trip, my mother had fallen and broken a rib. We had to take an ambulance to a Provence hospital, and not only could she not bike for the rest of the trip, but she couldn’t really walk either. She spent the remainder of our vacation in a variety of French hotel rooms while I rode from one to the next.

Out on the road, I was trying to keep up my spirits and have enough fun for the both of us, but there is this WIND in Provence. Perhaps you have heard of it, it’s called “Le Mistral,” and right away that is a bad sign, that it is a wind so strong as to have its own NAME. When Le Mistral is blowing — as it was on the day when I took this photo — it can gust up to 50 miles per hour, and there are warnings not to go cycling. But I did it anyway, and worried the entire time about the wind knocking me over, in a land where I did not speak the language and was all alone in the countryside because my mother was in a hotel room eating ibuprofen.

The view was extremely beautiful, though. That is 100 percent true.

There was a snow day, so my boyfriend and I worked from home, and we took a break to build a snowman! How adorable are we? We are like straight out of a movie called 500 Days of Winter!

Omitted from this photo: I had to bully my boyfriend into building a snowman. I was like, “LET’S BE WHIMSICAL,” and he said, “But it’s really cold and there’s no point and I’d rather stay inside and play video games. But you can go build a snowman yourself if it means that much to you.”

And then I got all upset about it and said, “Someday we will be old, and we will look back on these moments when we could have frolicked lovingly in the snow and we will be filled with regret.”

So he agreed to frolic, but I wouldn’t describe it as terribly “loving.”

If more people on Twitter had starred this one, that might have made me feel better about our forced attempt at romance.

My friend Emily and I biked down to the beach to see the sand sculpture contest. There was some amazing art there, as these photos show. And how lucky am I to live in a city where events like this happen, and to have a friend who wants to explore themwith me?

Omitted from these photos: The fact that it was 100 degrees and it took all my energy just to walk. Also the fact that Emily’s bike had gotten a flat tire on the way down to the beach. Basically I took some photos that I thought I could turn into an appealing Instagram collage once I was out of the sun and could breathe again, and then we left.

Here I am in the halcyon Hamptons, because I am so fancy and relaxed!

Not included: the fact that I spent my entire weekend in the Hampton with writers’ block, staring at this pond and hoping it would inspire me. (It didn’t.)

On the summer solstice, I like to have friends over to read through the entirety of Shakespeare’s A Midsummer Night’s Dream. This year one of my guests brought this awesome giant old tome, because she takes her Shakespeare even more seriously than I do — which makes her the perfect sort of guest for this party!

The part you can’t see is that I’d spent the whole weekend fretting about this party, culminating in crashing waves of anxiety right before people arrived. I had a specific vision of how I wanted this evening to go, so I was deeply worried that it would rain, or the food wouldn’t turn out right, or I wouldn’t have time to make all the food, or I wouldn’t have enough copies of the play, or whatever. Then on the day of, a few friends texted me to cancel last-minute, at which point I looked at all the food I’d managed to make and all the copies of the play I’d dug up and thought to myself, “What cruel irony is this life.”

Ultimately I had enough guests, the food got eaten, the play got read, and all’s well that ends well.

So, my point with all of these examples isn’t that these things which look so great online were actually terrible. None of them were terrible. My point is simply that these things which look perfect online are actually imperfect. That’s all. That’s what the protagonist in Tonight The Streets Are Ours realizes. And maybe someday, that’s what we can all realize too. In the meantime, please follow me @LeilaSalesBooks on Twitter and Instagram for more photos like these.

Just don’t take any of them too seriously.