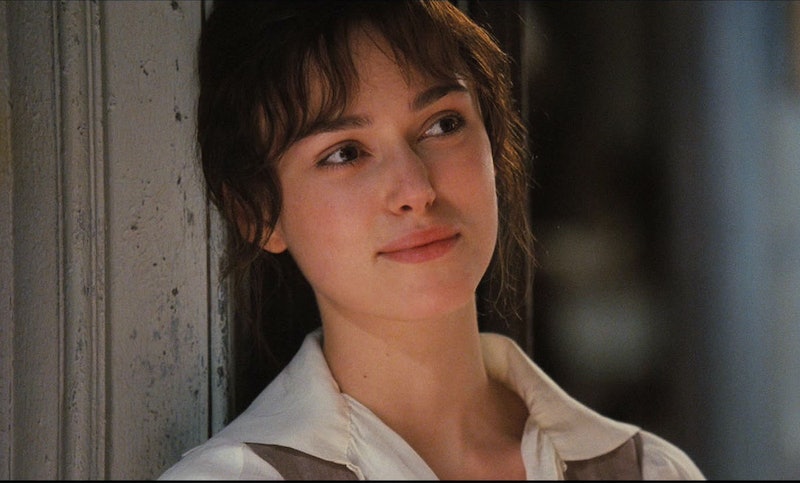 If there's one true thing about Hollywood, it's that Keira Knightley is period film royalty. Seriously, think back at the actress' films and what do you remember most of all? Aside from Love, Actually or Bend It Like Beckham, Knightley is most well-known for acting in some wonderful period dramas, from Pride & Prejudice to even the first three Pirates of the Caribbean films (yes, they totally count as period pieces even if they are within the "fantasy" genre). With Knightley's Pride & Prejudice co-starring Matthew MacFadyen as Darcy and Gone Girl herself Rosamund Pike as Jane Bennett celebrating its 10th anniversary this year, it's hard not to think back and start ranking Knightley's period films against this one. Is Pride & Prejudice the actress' best period drama?

It's a difficult decision to make considering Knightley's many wonderful entries in this genre of film in the last decade. She's grown tremendously as an actress and obviously because of this, many of the more recent films will be closer to the top of the ranking. But despite churning out many Oscar-worthy performances, including an actual nomination for The Imitation Game where Knightley co-starred with Benedict Cumberbatch, her first Oscar nomination came thanks to Pride & Prejudice, and that should not be forgotten. So let the analysis begin!

I wanted to like this movie so much considering it featured the talents of both Knightley, Alfred Molina and Michael Pitt, who deserves more acting accolades than he has received in his career. But I was unfortunately bored by the fact that the film was all about Pitt's character traveling to get silk eggs and having affairs while his wife, Knightley's character dies only to have her husband realize she's the right woman for him. This all sounds a bit harsh, I know, but there was so much potential in this tale and it was squandered on many unnecessary scenes.

It's not a very good movie overall, but what is really unfortunate about King Arthur is the atypical style in which the film is set and shot was not executed as well as expected. Knightley does get to show off some bow-and-arrow skills but her talents are wasted here.

10. Pirates of the Caribbean: At World's End

While I would probably consider the final films in the Pirates of the Caribbean franchise, At World's End, better than the second film, Dead's Man's Chest (only by a hair), Knightley is relegated in both films to a role that is not suited for her talents. She becomes just the love interest, even though she does get some opportunities to play tricks on Jack Sparrow and do a little bit of ass-kicking. Overall, it really is just a bit upsetting to see someone with so much potential for badassery get tossed aside in many scenes.

Same problem as above. It's not that great, guys.

8. Pirates of the Caribbean: The Curse of the Black Pearl

As already discussed, there's not much for Knightley to do in the Pirates films, but when she is introduced in The Curse of the Black Pearl, we see a strong, determined, intelligent woman who is whisked away on an adventure for which she did not sign up, and yet she totally rolls with the punches. Plus, Black Pearl is the best Pirates film by leaps and bounds.

This film, while on the surface centers around a love triangle, is actually about the two women in the story, played by Keira Knightley and Sienna Miller. The Edge of Love is not a great film, but the friendship and betrayal of Knightley's Vera and Miller's Caitlin are played beautifully. The love affair is really just an accessory to these performances, but where the film does falter is an unfortunate case of melodrama and script issues.

This fictional account of the real-life English aristocrat Georgina Cavendish is heartbreaking yet also has subtle moments of feminism throughout it thanks to the real-life struggles and strength of Cavendish. Unfortunately it does suffer from a pacing that is much too slow and sadly Knightley's excellent work is overshadowed thanks to these issues.

Perhaps it's because I never took to the story of Anna Karenina while reading it in high school, or maybe it's because the film itself is more style than substance, but I didn't take to this film as much as many others. But what is extremely apparent is just how wonderful Knightley is in the title role. The character is Anna is not necessarily the most likable, and yet you feel for her thanks to Knightley's performance. Plus her chemistry with Vronsky (played by Aaron Taylor-Johnson) and her tension with Karenin (played by Jude Law) is wonderful. It's an epic period love story worth watching, even with its many flaws.

We come to Knightley's most R-rated role yet. In David Cronenberg's period film about Sigmund Freud and Carl Jung, played by the talented actors Viggo Mortensen and Michael Fassbender respectively, Knightley still manages to stand out as Sabina, who initially starts out as Jung's patient but later has an affair with him and becomes a psychoanalyst herself. The film heavily features talk of the confines of sexuality and it is absolutely incredible to see a woman in film be allowed the chance to become so strong in her beliefs and knowledge about sex. Knightley chews the scenery left and right in this performance, but it's not a bad thing at all. She's been given the chance to stand tall and strong and she seems to do it proudly.

An incredible love story, a heartbreaking tragedy. This film, adapted from an amazing Ian McEwan novel of the same name, follows an upper class young woman, Cecilia, falling for a young lower class man, Robbie, but there's a big twist in the very beginning: Cecilia's sister Briony accuses Robbie of molestation and he is sent to prison right after he and Cecilia admit their feelings for one another. He later is allowed to leave prison to join the army and is even further distanced from Cecilia who is now estranged from her family. The film is gorgeous and breathtakingly hard to watch at times. But the performances from Knightley, James McAvoy who plays Robbie, and Saoirse Ronan who plays the young Briony are extraordinary. It's no wonder Ronan was nominated for an Oscar, but McAvoy and Knightley deserved nods as well.

Playing opposite Benedict Cumberbatch has to be difficult, but finding a way to truly shine in a film all about Alan Turing's breaking of the Enigma Code and his subsequent punishment for homosexuality is nearly impossible. And yet Knightley nails her performance as Joan Clarke, the fellow codebreaker who knew about Turing's true identity and remained friends with him even after his chemical castration. She's moving, whip smart, fierce, loyal and so compassionate. It's an elegant and inspired performance that deserved its Oscar nomination.

But in the end, her best film will always be Pride & Prejudice. Now it might seem like I picked this film to be Knightley's best role because it is celebrating its 10th anniversary, but that's not at all the case. I truly do believe that this is Knightley's best role to date, though it was a ridiculously close race with The Imitation Game and Atonement. Knightley is simply perfect as Elizabeth Bennett. She has the right amount of passion, love, stubbornness, intelligence, and caring for her friends and family. And she portrays Lizzie's journey so beautifully from start to finish. Plus that chemistry with Matthew MacFadyen is ridiculously great. Knightley is still young and is certain to have an illustrious career ahead of her, look at all of the amazing films she's made already, but Pride & Prejudice will always be an unforgettable performance in her roster.

More like this
Keke Palmer Shares The Sex Of Her & Darius Jackson's Baby
By Jake Viswanath
Austin Butler Confirms Vanessa Hudgens Pushed Him To Do 'Elvis'
By Alyssa Lapid
At 28, Rosie Perez Risked Her Career To Stop Playing Stereotypes
By Gabrielle Bondi
North West Will Make Her Acting Debut Alongside Mom Kim Kardashian
By Radhika Menon
Get Even More From Bustle — Sign Up For The Newsletter
From hair trends to relationship advice, our daily newsletter has everything you need to sound like a person who’s on TikTok, even if you aren’t.