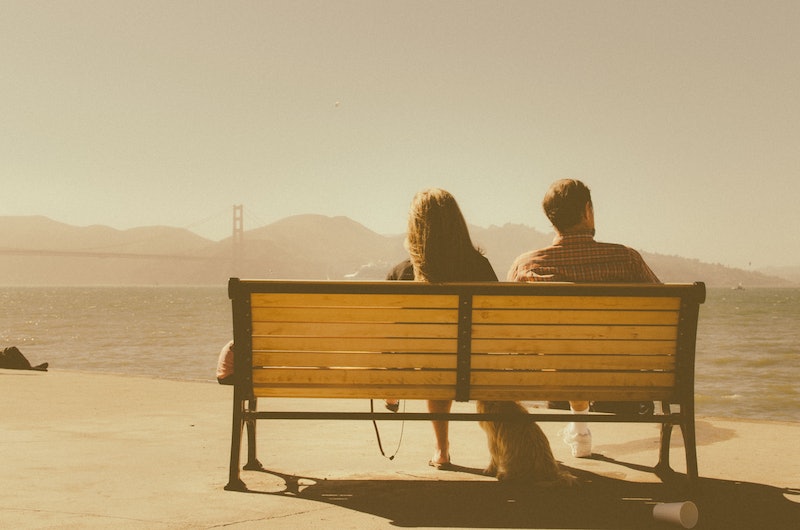 Let me start out this post with the obvious notion that not every woman is looking for someone to march her down the aisle, marriage is not necessarily right for everyone, and most women do not spend every second desperately trying to pin down a man. If you are among the fold who is looking to find someone to spend your life — or at least more than one night — with, however, finding that person isn't always easy... especially if you're a college-educated woman living in a city. Actually, it's nice to know that the reason you may be struggling is simple supply and demand.

That's exactly what Jon Birger's new book, Date-onomics: How Dating Became a Lopsided Numbers Game , says. Birger is a business journalist, and by looking at the dating game from a numbers perspective, he argues that finding Mr. Right has become nearly impossible because there is a "man deficit."

"It's not that he's just not that into you," Birger writes. "It's that there aren't enough of him."

And just what has led to this dire man shortage? There are 1.05 boys born for every one girl in the United States... so where do those extra males go between birth and puberty? As Birger explains, where they definitely don't go is college, and therein lies the problem.

The gender ratio at most colleges and universities is 57 percent female to 43 percent male. That may not seem that significant, until you realize that means there are four women to every three men. Depending on your preferences, this can be a fun thing, but Birger's book focuses solely on the problem college-educated, straight women have finding the college-educated, straight man of their dreams. As these diploma-laden women move on to cities like New York, Houston, and Chicago, they take that lopsided ratio with them, basically creating dating scenes that are a commitment-phobic man's idea of paradise.

"College-educated millennials are graduating into a dating market with 134 women for every 100 men," explains Birger.

So, the next time your grandma, brother, or nosy aunt asks why you haven't settled down with a nice guy, serve them all with the following list of reasons backed by cold, hard statistics. Because even your crazy Aunt Betty knows that numbers don't lie.

You Picked The College Of Your Dreams

So, about a quarter of college-educated American couples met in college or grad school, and if you went to a school like, say, Sarah Lawrence, where 64 percent of the population is female, your odds for meeting a guy are definitely altered. As Birger puts it, "You don't need a degree in applied math ... to understand that a woman attending a college with fewer men faces lower odds of meeting her future husband in school." He also writes that studies show "men are more likely to play the field and delay marriage when women are in oversupply." The good news, though? You got a degree, made the friends you will keep your whole life, and had a great time. Shame on you, though, for not considering gender ratios when you picked your college, right?

Statistically, Things Get Harder With Age

Simply put, Birger writes that you're more likely to find a suitable college-educated husband when you're 25 as opposed to 35, even with all the surplus girls running around campus. That's a fun double-standard, right? However, think about how much your priorities change as you get older, and how much your figure out what's important to you in a partner as you age. That kind of growth and confirmation in myself is enough to make me — and many other women — not give a flying whatever about statically "diminished odds."

You're Career-Driven In The Field You Care About

According to Birger, 10 percent of couples meet at work. If finding a heterosexual mate is high up on your list of goals, like higher up than your dream of becoming a teacher (80 percent women), better go back to school to be an aircraft mechanic, because 98 percent of them are men. Otherwise, just say you're still single because you decided to pursue your dream job rather than your dream man. That looks pretty good on you, too.

You Chose To Live In The Location You Wanted

Ratios where you live can affect your dating odds. According to Birger, the most valuable deposits of men are in the West, particularly California. "Three of the five counties with the highest ratios of men to women were in California, as were eight of the top twenty-five," Birger writes. So, if Grandma Phyllis asks about the dating scene in New York, you can ask her if she'd rather you go chase guys in the Golden State, or have your weekly brunches with her instead. (I bet I can predict the answer.)

You Have Standards For A Guy

...and, of course, you should! You should know what qualities are important to you in a partner. It's important to acknowledge, though, that, according to numbers, if you're only looking for someone with a college degree, then you're cutting out a big section of the male population.

I wouldn't move across the country or change my job to meet a guy, however, I'll take the advice Birger offers on this point: If you're guilty of elitism in dating, try broadening your horizons a bit. After all, going to college does not necessarily make you smarter, and it definitely doesn't automatically make you marriage material. Birger advocates for more college-educated women to consider dating "blue-collar" or "working class" men — i.e., men who don't have degrees. If a smart, single woman meets an interesting, considerate, confident, available man, I don't see her giving him the boot because he doesn't have a degree.

I like Birger's book because allows women to take some of the pressure off of themselves who are looking for someone to share their happiness with. Bottom line is that, statistically, the competition for college-educated guys in urban areas is tough — and the studies Birger cites show that the more women men have access to, the less likely they are to commit. Simple as that. (There's one more stat you can throw out to the "Why are you single?" Q.)

Whatever you do with this information, though, my thought is that if you're in a healthy relationship with yourself, love will find you. Demographics be damned.