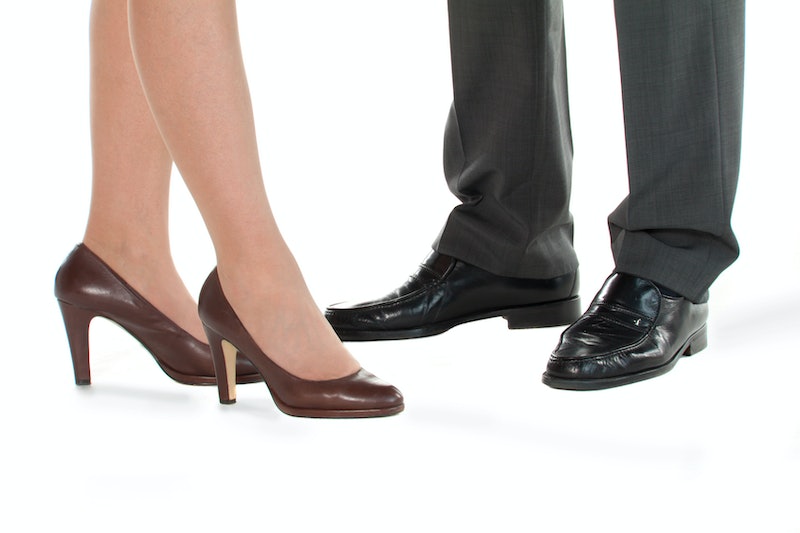 Pop quiz: What do Pam Beasley and Jim Halpert, Don Draper and Megan Calvet, Gregory House and Lisa Cuddy, and Will Schuester and Emma Pillsbury all have in common? They all started out in the same way many of us dream of finding our partners and lovers — as workplace romances. But while the flirting was there from the start, the full-blown romance didn't happen immediately. As we all know, office romances take some time to fully ignite, a phenomenon which BuzzFeed's "Stages of an Office Romance" video depicts with astonishing accuracy.

"Stages of an Office Romance" details the delicate mating dance performed by employees when confined to an office space for eight to 10 hours, five days a week. Office romances are pretty different from other ways people meet their significant others, insignificant flings, or friends with benefits; for example, going on Tinder dates, striking up conversation at a bar, attending some sort of mixer, or going to a party are all ways to meet people where the sole purpose is to have fun and be your best, stress-free self. Work environments, on the other hand, are the opposite — the purpose of working at an office is to do your job, do it well, get paid, and if you're really lucky, have a fun doing it. So striking up an office romance can be quite the challenge, especially because of all the pesky irritations in the way (I'm looking at you, coworker who always third-wheels and seems to not understand that I am TRYING TO FLIRT WITH THIS OTHER HUMAN).

Here are all the stages of an office romance in eight pictures; scroll down to watch the full video.

Stage One: The Impersonal Cubical Introduction

The first stage of an office romance is always the introduction. It's usually a little awkward and involves something standing in between you and your future romantic fling — whether it's an actual cubicle wall, a stack of papers you have to deal with, a meeting you're headed to, or the aforementioned third-wheel coworker who can't pick up social cues and insists on everyone taking their lunch break together. Initial office introductions are often short and quick because there's inevitably something else you both have to get back to.

Stage Two: The "I Know You Well Enough to Sit Next to You During a Meeting, But Not Enough to Strike Up a Conversation" Stage

OK. You've exchanged names, determined what department you work in, and maybe shared some other miscellaneous information that you immediately regret telling your crush (i.e. your obsessive attachment to your cat, your digestion problems, etc.)... but you still don't really know the person well enough to run into them and have a full-blown conversation. However, you do know them well enough that it's not weird to make brief eye contact or say hi when you see them in the break room, by the copy machine, or walking down a hall. The most intimate you get at this stage is sitting next to them at a meeting or some other work-related event.

By this point, you've got a little crush. But you work in HR and they work in Accounting, so now you have to find a reasonable excuse to go see them without making your crush too obvious. Maybe you "ran out of paperclips" and no one else around you had any. Maybe you "had a meeting in this neck of the woods," so you'd stop by and say hi or "Ilana did something on last night's Broad City episode that reminded you of them." Really, anything goes.

Flirting levels at stage 3: Medium, but the giggly and shy kind of medium.

"Oh, you're having computer problems? Let me just reach over and see what's going on... no, no you don't have to move. I'm just going to reach around you and let my head hover over yours so you can smell my fresh, minty, delicious breath and cologne. Why, yes! That is Gucci cologne, thanks for noticing! Oh, I'm sorry, I didn't mean to touch my hand to your hand... but now that I broke the hand barrier, there's something in your eye. No, don't worry, I've got it — you can't see it, so it'll be easier for me anyway!" It's important to note that everyone should be on board with the physical content; if they're not, cease immediately.

Neither of you can take it any more. It's clear you're into the other person and the other person is into you. To hell with being responsible for the next hour — it's time to find a supply closet, bathroom, conference room, or even car and go at it with all the tension that's built up over the last four stages. You deserve it, champs. (Except don't actually have sex at work — that's an excellent way to get fired, and you definitely don't want that.)

Stage 6: The Morning After

So. That was it, huh? You did it. But unlike other one-night-stand situations, you now have to see this person in the morning. And throughout the entire day. And the next day, and the day after that. Bootycalling your ex would have been less cringe-worthy than this.

Flirting levels at stage 6: Minimal — possibly even negative. It's like anti-flirting.

Stage 7: The Morning After, Continued

The morning after stage gets two stages, because the awkwardness and potential regret seem to be never-ending. You no longer make eye contact and say hello; there are no more copy-room debriefs of annoying coworkers; and sitting next to your fling isn't really an option. Will this ever end?

Stage 8: The End (And a New Beginning)

Nothing lasts forever, though — not even post-coitus awkwardness with someone you work with. During stage eight, someone will break the ice so this nonsense doesn't go on forever and things can go back to normal. This can done with a little gesture like the one seen in this video, or a conversation about what happened, or any number of other possible behaviors. At this point, whatever works to get things back to normal will be appreciated by all parties (and all your colleagues, too).

Flirting levels at stage 8: Pretty much neutral, but full of potential energy.