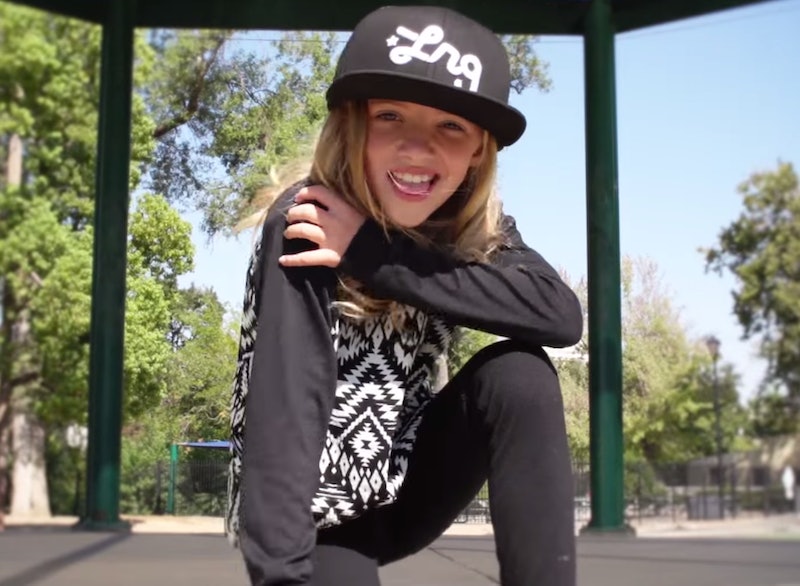 I don't know how or where this incredible little girl was discovered, but Monday night's Season 12 finale of So You Think You Can Dance introduced Sarah "Lil' Mini" Phoenix to the world, and she is just the best. Phoenix Lil'Mini stole the show away from every single person who performed on the SYTYCD for the big finale, including the contestants who were asked to once again dance some of their best performances from the season. Lil'Mini performed an animation routine with All-Star Cyrus that brought down the house and her talent made Nigel Lythgoe say in his introduction of her routine that because of her, he considered doing SYTYCD for children. But here's the thing, if this joke actually became a reality, Lil'Mini would win in a heartbeat. So who is Phoenix Lil'Mini?

This amazing little dancer has been dancing for ages. She has danced with a group called ChapKidz, as part of Chapkis Dance, and the team took home the top prize at the 2015 World Hip Hop Dance Championships. She was also involved in a photo project for the clothing brand Uniqlo, she danced with SYTYCD Season 12 runner-up Jaja, and she's been co-dancing with All-Star Cyrus for more than just their SYTYCD routine. In fact, the reason for Phoenix Lil'Mini's appearance on SYTYCD was thanks in large part to her animation dance with Cyrus at the Dizzy Feet Foundation's 5th Annual Celebration of Dance gala at the beginning of August.

But what's really important here is that Phoenix Lil'Mini has so much talent for such a young girl. She's clearly been working hard at her skills and she could easily match up against and excel over many adult street dancers, including quite a few that have graced the SYTYCD stage over the years. It's a shame to think that Lil' Mini is much too young to actually be able to compete for So You Think You Can Dance for the time being, but now that Nigel likes her so much, perhaps she can come back for more performances once the show is inevitably renewed for Season 13? I think the public and fellow SYTYCD fans will agree with me when I say we can't get enough of this amazing little dancer.