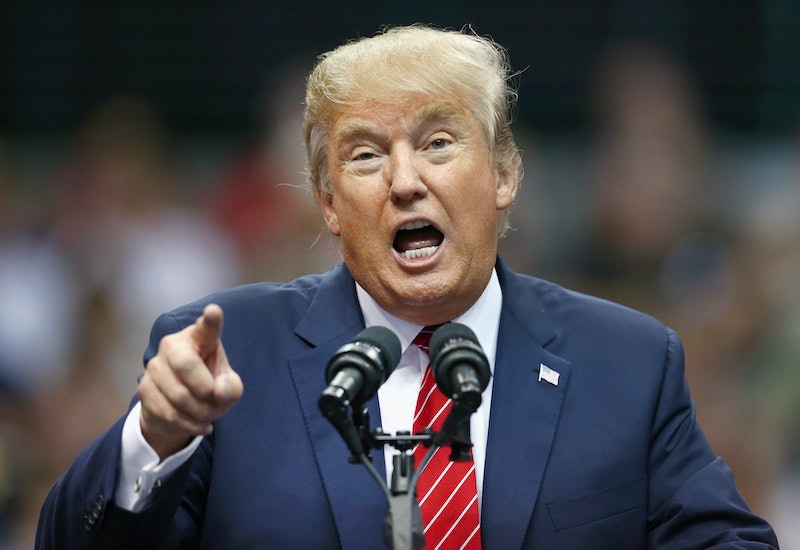 Look who's laughing now, Donald Trump. After that "blood coming out of her wherever" joke about Fox News anchor Megyn Kelly, he now has blood coming out of his whole face in the painting "Whatever" by Sarah Levy created with actual menstrual blood. That's right: A Donald Trump menstrual blood portrait exists, and it is glorious. And if that wasn't already enough to provoke Trump's displeasure, the portrait will be auctioned off to raise money to help Mexican immigrants — the worst nightmare of a presidential candidate who calls this demographic "people that have lots of problems" and "rapists."

Levy is auctioning off the original painting, which she writes was created with a paintbrush and a tampon; she's also selling prints of it for $20 on Etsy. Money from both the prints and the auction will be used to raise funds for an immigrants' rights organization. She told Bustle in an email about her motivations for using this particular medium:

It was outrageous to me that someone running for the Presidency of the United States of America — not just some governor somewhere, but President — could say what he did about Megyn Kelly and still be in the race. To think that he can bring in the healthy functioning of women’s reproductive system not just to avoid tough questions but to insult women’s intelligence is to me outrageous. Think about it — if it had been a male moderator, would he have said something like, "Oh, maybe he just needs a colonoscopy"?? Of course not. And he’s running to be the President of the USA...

I think there is a way to use art, especially if it is kind of humorous, to begin to deflate Trump's arrogance and give back confidence to all the people who might be a tad terrified at the prospect of such a racist doofus running our country... Trump is trying to smash the idea of "political correctness" and make racism and sexism "sexy." And while he is clownish, it has had a real impact on people, such as the two immigrants who were assaulted by racists who later cited Trump as inspiration. So I think he does need to be shut up and deflated and any way I can help do that — if it's by inverting his sexist comments into menstrual art — I'm going to do.

Here's the painting in full:

Levy is receiving bids at bloodytrump AT gmail DOT com and writes that those interested in the auction can learn more on her website and her Twitter @levysarahm. In the meantime, people are discussing the painting at the hashtags #BloodyTrump and #realdonaldtrump.

In addition to calling out Donald Trump's sexism, Levy is also adding to an ongoing effort to destigmatize menstruation. Earlier this year, artist Jen Lewis and her husband created the project "Beauty in Blood," using close-ups of period blood to bring out the intricate patterns it forms. And another artist, Rupi Kaur, called out Instagram for banning a photo that showed her period leaking through her pants, pointing out that the social media site is "filled with countless photos/accounts where women (so many who are underage) are objectified. pornified. and treated less than human."

People like Levy, Lewis, and Kaur are showing that, far from a debilitating event, menstruation can become an opportunity to make a political statement and create social change. "Blood coming out of her wherever" should be a compliment.