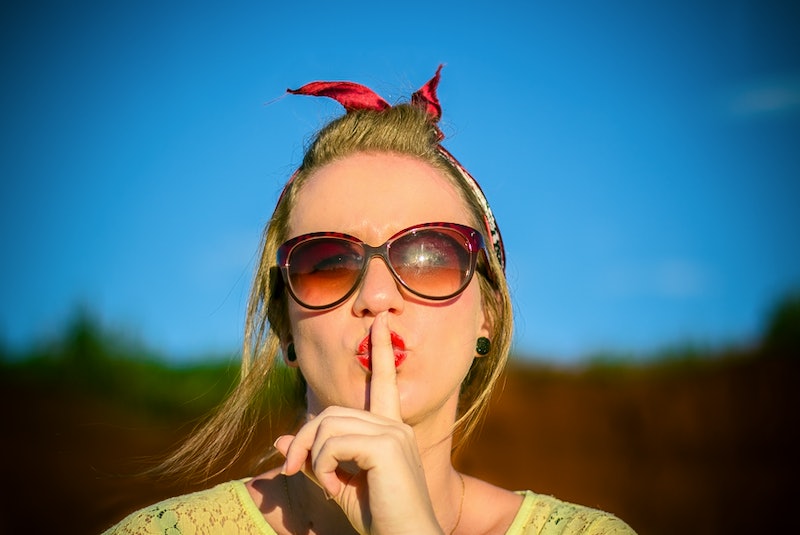 We've all heard the term "mansplaining" thrown around, usually in the never-ending war between feminists and hordes of meninist trolls online, but such battles rarely pause to explain the word to the uninitiated. If you've ever wondered what mansplaining is but found the Urban Dictionary definitions oddly vitriolic and biased, your salvation is finally at hand. Blogger Elle Armageddon created a flowchart explaining exactly what mansplaining is and when it's appropriate (spoiler: never) — but here's the key: The chart isn't actually about mansplaining. Which, it turns out, is the most important element of the whole story, because despite "mansplaining" never being mentioned, the mansplainers of the world have used the chart as a springboard to — you guessed it — mansplain that mansplaining isn't actually a thing. Way to disprove your own point, mansplainers.

First, let's start with a basic introduction to the topic. Have you ever been deep in conversation with your friends at a coffee shop, discussing neuroscience, Orange Is the New Black , or whatever floats your particular boat, only to have a man spontaneously appear from the ether in order to re-explain the subject to you all in excruciating detail? Are you forced to maintain a fixed smile during family dinners as your brother-in-law details basic principles of physics for your benefit, even though the subject came up in the first place because you were discussing your high MCAT score? Have you had male friends give you advice on how to be a better feminist after taking an introductory gender studies course?

If you've answered yes to any of the above, congratulations! You've experienced mansplaining. Welcome to the club. It sucks.

According to the Daily Dot, Armageddon was inspired to create the chart after a man took the time to explain the difference between ascending and descending street numbers to her (oy). But the chart isn't about mansplaining, per se; it's about giving unsolicited information. Entitled "Should You Explain the Thing to the Lady?," the flowchart details when it is and isn't appropriate to dole out uninvited information. The first question, for instance, asks whether the user is an expert in the subject, or "at least well-informed." If not, the proper action is to keep your mouth shut. It even tackles overzealous tutors and teachers that may or may not be re-explaining basic concepts students are already familiar with.

It's a genius chart that struck a chord with many people online, including a large number of women, causing it to be retweeted more than a thousand times. Why women in particular? Because the chart illustrates exactly what happens during instances of mansplaining.

However, if you're at all familiar with the Internet, you can probably guess what happened next: Men took to Twitter to mansplain the mansplaining chart.

If you just struggled not to roll your eyes so hard they'd fall right out of your head, you're not alone. Although Armageddon told the Daily Dot that the chart was meant for a "quick laugh" and it "doesn't pertain specifically to men," her followers of the male persuasion didn't seem to get the memo. Instead, they complained that the chart was an attack on all men, and its very existence threatens the "open medium" of Twitter.

"Who asked you to explain this? Are you everyone on Twitter's teacher?" asked one user.

"Rights should not depend on gender," complained another. I should probably point out that this is the same guy who said the chart violated the free speech of Twitter — he's just a goldmine of whiny male privilege. (Later in the conversation, however, he apologizes for misunderstanding. Hooray for progress!)

What all these mansplainers are missing, however, is that the chart never actually says the word "men;" gender is mentioned solely in the context of the "victim" of unsolicited information. Athough she told the Daily Dot that a "disproportionate number" of men explain her own blog posts to her, Armageddon's original tweet doesn't discuss gender either. In fact, it wasn't until men made the chart about themselves that it turned into a gendered discussion at all. Ain't irony grand?