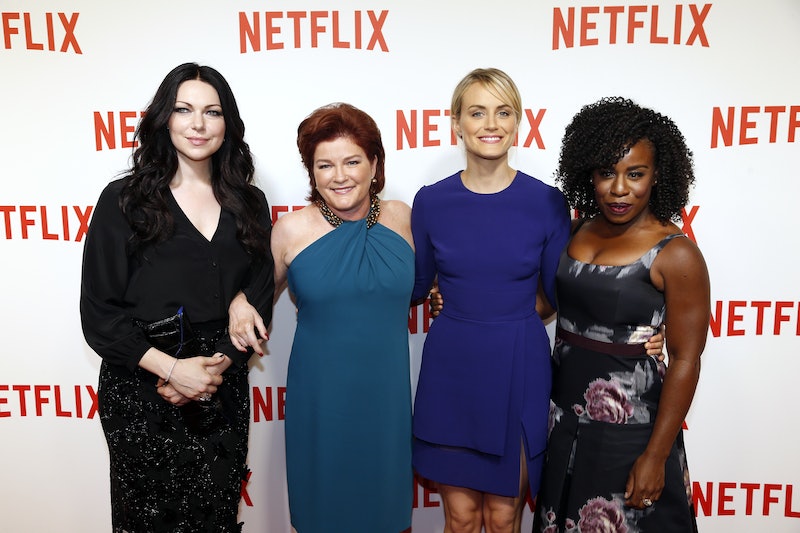 Since its premiere in the summer of 2013, Orange is the New Black has been a critical and commercial success, winning Emmy, Golden Globe, GLAAD, and Peabody Awards. It helped establish Netflix as legit producer of original content, and thus paved the way for more amazing Netflix originals, like Unbreakable Kimmy Schmidt and Grace and Frankie. The show is revolutionary in both form and content: Form because, since Netflix released its episodes all at once, the series is now synonymous with television marathoning, and content because Orange Is The New Black has indisputably changed the world thanks to its plots that put a diverse set of women at the forefront.

It's changed the way Hollywood operates, when you think about it: When TV and film execs saw the success of OITNB, many undoubtedly began to realize that people will watch stories that aren't just centered around straight, white, male anti-heroes stepping ever-so-slightly out their comfort zones. Both network and cable producers have begun producing and presenting more diverse programming — How To Get Away With Murder and Jane The Virgin, just to name a few. With its themes dealing with race, class, and criminal justice, OITNB has promoted discussion beyond its particular characters.

Here are seven ways that Orange is the New Black has proven to be more than just a television show.

1. Advancing The Visibility Of Transgender Individuals

Laverne Cox's moving, hilarious performance as Sophia Burset has given her a platform both onscreen and off. She became the first transgender person to cover TIME magazine back in 2014, and, since the show's premiere, has used her fame as a platform from which to tell her story and empower others. And this goes beyond just Cox herself: “What we’re seeing now is trans folks taking more control over how our stories are told and challenging the ways in which trans stories have been told,” she said at a speech at Harvard University.

OITNB has a large cast that includes a very diverse set of actresses — and the series never fails to treat their stories with depth and complexity. Oftentimes, characters of different races are relegated to "token" status on television, but OITNB puts their stories front and center, and discusses issues of race and class head-on.

In his review of Season 2, The A.V. Club's Todd VanDerWerff wrote, "Put simply, this is one of the most empathetic shows in the history of television... its ambition and audacity in storytelling grew to match its already present but quietly revolutionary insistence on treating every character in its universe like a human being with oceans of stories to tell." By treating its characters with respect and going deep into their backstories and psyches, OITNB promotes understanding of people who may be different.

4. Exposing Corruption In The Prison System

Piper Kerman — the real, O.G. Piper who wrote the memoir OITNB is based on — is a consultant on the show and uses the success of OITNB to advocate for criminal justice reform. The show sheds light on issues of prisoner abuse, racism, transphobia, and transmisogyny, which have been largely unseen by the public in television and film.

OITNB offers a diverse set of storylines to LGBT characters, and demonstrates how sexuality is a spectrum. Piper's sexual fluidity is central to the plot, and same-sex female relationships are the norm — not something often seen on TV.

As Bustle's very own Rachel Simon pointed out last year, OITNB has changed the way we view former inmates. Simon explains, "as the series gains in popularity, more and more people are beginning to understand that, more often than not, a person’s crime is not their defining characteristic. Though this doesn’t mean that former inmates can now easily find work or avoid discrimination, it does mean that the public’s greater understanding could begin to set progress in motion."

7. Putting Women In The Lead

“There are women of all different shapes. Many of the characters are over 40. There are short women, straight, gay, old; everyone is represented here,” Lorraine Toussaint (Vee) told the New York Post in an interview. "I think the show will change how women are seen in Hollywood. There’s this myth that female-driven shows can’t be successful or can’t make as much money domestically or abroad [as shows about men], and this show has blown that all out of the water.”

Much like how the diverse casting motivated popular networks to follow suit, the success of OITNB prompted Hollywood to start putting more women in the lead. This season we had How to Get Away With Murder on ABC (fronted by the talented and gorgeous Viola Davis) and female-fronted movies like Spy. While we are nowhere near where we ought to be with regard to female representation in the media, the success of OITNB got the ball rolling, and that's worth paying attention to.