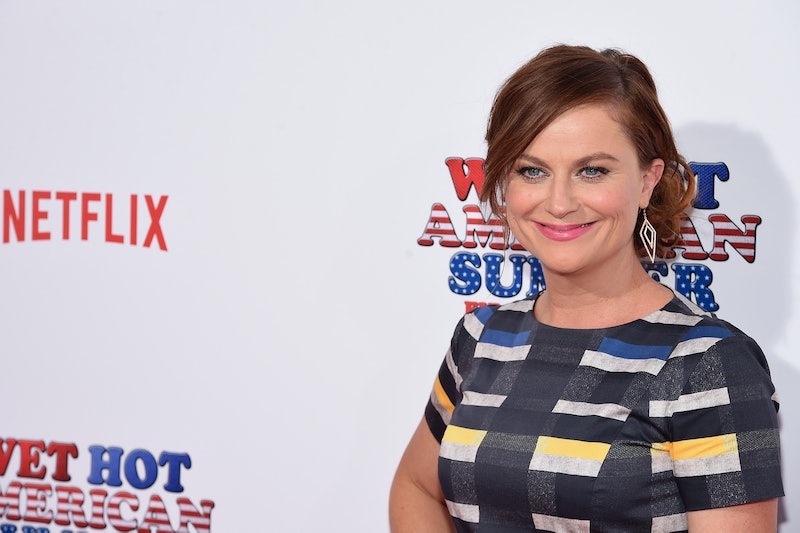 Something tragic has been happening for the past couple of years, and I fear that not enough citizens know about it. Are you ready for this? Amy Poehler has won a total of zero Emmys . I'll give you a moment to close your now agape mouth. Though Poehler did win a Golden Globe in 2014 for her iconic role as Leslie Knope, and even though she's been nominated 17 (!!!) times (including this year), her greatness has yet to be recognized by the Television Academy. In fact, Poehler has been nominated for at least one Emmy every year since 2008. As I'm typing this, I can feel a collective consciousness forming — one where everyone simultaneously thinks: "Please let this be her year!" I feel you, but not so fast, my fellow Poehler supporters. She's got some tough competition this year, and, if history's any indication, the future isn't looking super bright.

For her nomination as Lead Actress in a Comedy Series, she's up against Julia Louis-Dreyfus (four time winner from Veep), Eddie Falco (Nurse Jackie), Lisa Kudrow (The Comeback ), Amy Schumer (Inside Amy Schumer ), and Lily Tomlin (Grace and Frankie ). Will she be able to pull it off? Since Parks and Recreation ended this year, 2015 seems like the perfect time for a win. But just because this was her final year on the show doesn't mean she'll be handed any awards, since, apparently, it doesn't work like that.

Though I hate to imagine that we live in a world where Amy Poehler won't get credit for her work on Parks and Recreation, it's a big possibility. However, even if she doesn't take home the lead actress Emmy, Poehler still has a chance to win one of her other three nominations: Outstanding Writing, Outstanding Special Program, or Outstanding Comedy Series. Not to trivialize any of the other nominees, but, seriously, Poehler really deserves some recognition. Here are just a few reasons why.

Poehler seems like an actual joy to work with. If you need to be convinced that the set of Parks and Recreation wasn't anything other than full of companionship, loyalty, and mad LOLs, I urge you to look up its bloopers.

So, yes, I have taken my top two reasons from her book Yes Please, where Poehler so perfectly, succinctly gives the following advice: "Be nice, work hard." The actress produces, writes, and stars in Parks and Recreation. She's the puppet master and the puppet. She's the biggest reason that show has been successful. (Not even going to include all the countless hours she's put into other projects like, oh, I don't know, a little indie TV show called Saturday Night Live.)

Poehler has never been afraid to identify as a feminist, and that kind of confidence and comfort level with the, at times, controversial label has permeated into Knope's character as well.

I could fill a 300 page notebook with wise quotes from Poehler, but I'll just leave you with this one that so describes how I feel about her (taken from a Katie Couric interview in 2011): "I just love bossy women. I could be around them all day. To me, bossy is not a pejorative term at all. It means somebody’s passionate and engaged and ambitious and doesn’t mind leading."

Poehler started Smart Girls at The Party back in 2008 as a website, and eventual web series in 2012, that empowers teen girls to not be shy about their intelligence and the things that make them different.

6. She Created A Holiday

Even though Ben and Leslie were the cutest couple ever, the real reason I watched the show was for its portrayal of female friendships. Poehler even told Elle, "Ann and Leslie are the true love story of the show." And what better way to celebrate those friendships than to create a holiday dedicated to them? Perhaps Galentine's Day (Valentine's Day for gal pals, in case you're not in the know) hasn't been recognized by Hallmark yet, but people regard it as a real holiday. If that doesn't show you the influence of Knope/Poehler, I don't know what will.

If she doesn't win, the only thing that will be able to soothe my wounds will be a some sort of hilarious — of course Poehler would do that! — kind of stint. And, in the spirit of that, I'll just leave this here...

You have to admit it: She's even good at losing.