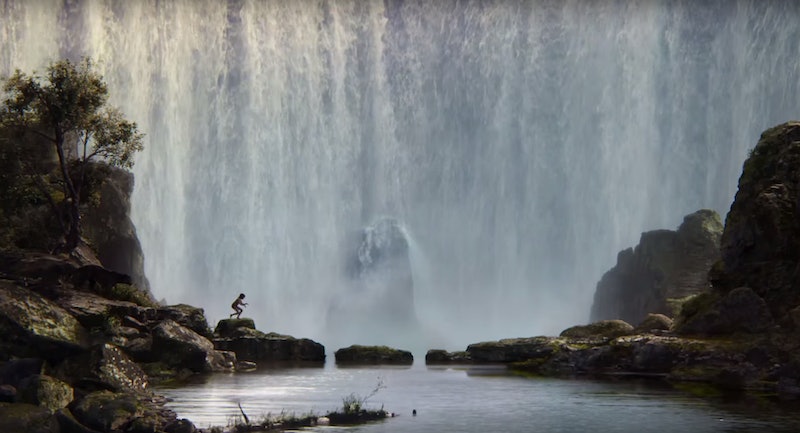 The first full-length trailer for Disney's live-action Jungle Book that debuted on Tuesday is so beautiful that it's unreal. Literally. Director Jon Favreau spoke about the making of the movie on Access Hollywood Live on Monday where he showed a teaser of the trailer, revealing that the only live-action character in the movie is Mowgli, played by newcomer Neel Sethi. Favreau talked about how he made his movie magic: "All of this was shot in downtown Los Angeles. The only live-action character person is Neel Sethi, playing Mowgli. The humans are the only things that are real. The environments, the animals — all of that is generated by artists," Favreau said. And it looks like he hit the sweet spot: the first trailer for his adaptation of the 1967 animated Jungle Book is so gorgeous, it's unbelievable, filled with the lush, rich landscapes of the fantastical jungle where our adventure begins.

The trailer, coming in at just under two minutes, is narrated by Scarlett Johannson, who lends her silky, sinister voice to the serpent Kaa: "Are you alone out here?," she asks of a young Mowgli. The rest of the voice cast is just as impressive: Emjay Anthony as Grey Brother, Idris Elba as Shere Khan, Giancarlo Esposito as Akela, Ralph Ineson as Father Wolf, Ben Kingsley as Bagheera, Bill Murray as Baloo, Lupita Nyong'o as Raksha and Christopher Walken as King Louie. The full-length trailer is full of action in the stunning Indian landscape that was created on computers. The future is now!

Here are nine moments from The Jungle Book trailer that are unreal and will have you counting the days until the film's debut in April of 2016.

1. The First Shot Of The Iconic River

With a sinister Kaa making the hairs on your neck stand up as she asks Mowgli, "What are you doing so deep in the jungle?"

It's clear from this trailer that the 10-year-old actor has a wild talent: he had to act with basically all imaginary characters around him.

Gorgeous. And none of it is real! It was all shot in Los Angeles.

Bill Murray will voice Baloo, Mowgli's protective bear pal. Though we don't hear him speak in this trailer, we do get a sweet surprise at the end...

Mowgli is straight-up dwarfed by this orangutan.

If there is one thing that's certain, it's that this live-action Jungle Book is going to be a lot more dark than the animated version, and that's how Favreau wants it. "You want to make an action movie for people who don't know the old movie and just maybe know the more the Rudyard Kipling story. I mean, it gets pretty intense at times," the director said.

The villain is voiced by the formidable Idris Elba.

And something sweet to tug at your heartstrings: the final shot in the trailer is Mowgli sitting on Baloo's belly as he backstrokes down the river, whistling "The Bear Necessities."

Watch the full trailer below.

More like this
At 28, Lesley Manville Was Acting, Picketing, & Singing Kate Bush Songs
By Olivia-Anne Cleary
Reese Witherspoon Gave Fans Hope For 'Legally Blonde 3' After This Surprising Movie Inspired Her
By Jake Viswanath
22 Movies On Netflix That Are Perfect For The Whole Family
By Bustle Editors
Watch The Trailer For Netflix’s Edgy New Comedy 'FAKES'
By Brad Witter
Get Even More From Bustle — Sign Up For The Newsletter