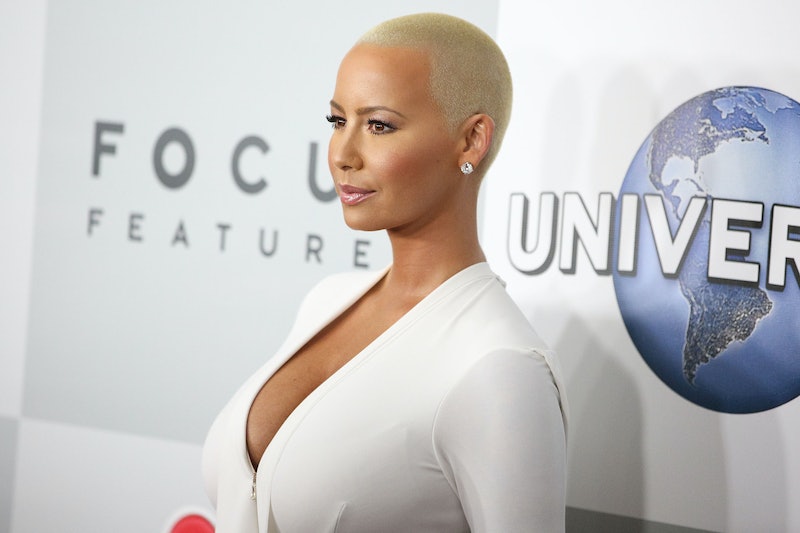 Amber Rose is a beautiful woman who is proud of her body and her career, and always fierce in letting people know that fact. Unfortunately, women who are confident in their sexuality and have strong opinions are often negatively portrayed in the media. But Rose is fighting back against stereotypes meant to put shame upon women, totally owning her sexuality, and encouraging other women to do that same. The 31-year-old teamed up with Funny or Die to produce the hilarious video "Walk of No Shame With Amber Rose," which is meant to put back the "pride in her stride."

You might be very familiar with the situation the "Walk of No Shame" video tackles. You wake up with smudged mascara at a cutie's house and, well, you don't have a change of clothes or flats, so you automatically feel petrified about it. But why? Simply because we have been taught that that what we were doing is shameful. A grown woman making her own decisions and enjoying herself just has to be embarrassing, right? Well, not in Amber Rose's world. The video opens with a milkman asking a smiling and hip-swinging Rose, "It looks to me like you had sex last night." She proudly replies, "I sure did!" Go on, mama.

My favorite thing about this video is changing the "walk of shame" to the "pride stride." Being a sexual person does not and should not be equated with anything shameful, which is something Rose knows all about. As a refresher, Rose was publicly bashed by her ex-boyfriend Kanye West, who told The Breakfast Club, "It's very hard for a woman to want to be with someone that's with Amber Rose… I had to take 30 showers before I got with Kim." After the remarks, she told Perez Hilton, "We were happy when we were together! And now all of the sudden, I'm getting slut-shamed because we're not together anymore and it's not fair."

The Funny or Die video is a promotion for her upcoming Slut Walk, which is the result of the repeated slut-shaming she receives, primarily via social media, everyday. The Slut Walk idea began in Toronto in 2011, as a protest against a police officer who proclaimed that "women should avoid dressing like sluts" to avoid being victims of sexual assault. Rose's own Slut Walk in Los Angeles on Oct. 3 isn't just about reclaiming terminology used against women, like "slut" and "whore," but about openly speaking on the inequality that still goes on today, in the form of wage gaps, sexual assault, and more.

Even now, after the release of this video, the general public will likely continue with its misogynistic attacks against Rose's character and appearance, but she is the type of woman who other women need. She is fearless, passionate, and well-versed and understands the need for change is something to be outspoken about. And her new video and Slut Walk show just that.