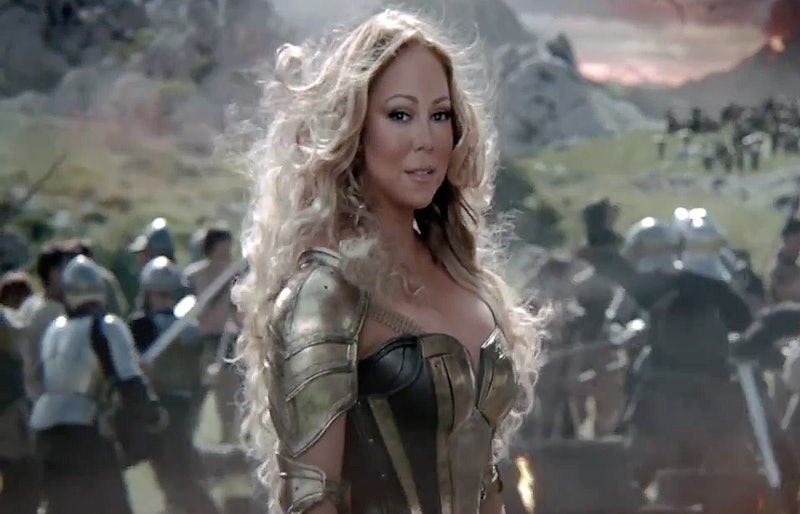 Get ready for "The Digitization of Mimi": the Mariah Carey "Game of War" video game commercial is here, and, according to me, it's basically the new frontrunner for Best Picture. It deserves several Oscars and probably every Golden Globe award (and maybe even a few Emmys, too). I must admit, when TMZ first reported in June that Carey would replace model Kate Upton in TV spots for the popular app, I was pretty skeptical. "There's no way she agreed to do that," I thought to myself. You know the legendary diva has never touched a video game in her life! But, obviously, I was wrong... dead wrong. Not only did Carey agree to appear in a "Game of War: Fire Age" commercial, she agreed to let the company use her iconic 1993 ballad, "Hero," as well! What in the E=MC² is going on here?

I mean, Carey is one of the most respected and talented artists in the music industry today. Isn't this whole "Game of War" thing kind of beneath her? Her songs may not top the charts anymore, but surely she doesn't need to do video game commercials in order to pay the bills... right? RIGHT?!

I don't have any insight into Carey's current financial situation, but I actually love the fact that she signed up for this ridiculous gig. Let's face it, sometimes, Mimi takes herself waaay too seriously. It's nice to see her let go and pretend to be an ancient warrior who slays dragons with a mystical crossbow every once in a while! Just call her "The Elusive Video Game Chanteuse." Check out the "Game of War: Fire Age" commercial below. I just can't get enough of it. (Hopefully they shot more than one!)

Carey's "Game of War: Fire Age" commercial has given us many gifts, but the most important gift of all is this GIF of her running into battle:

Why/how is she moving like that? Also, her face! It's my new go-to GIF. It's so versatile:

When You Need To Escape An Awkward Convo

Sometimes, abruptly fleeing the scene is your only option.

Friend: "Can you help me move this weekend?"

See? So relatable. Mimi in this GIF is truly ~all of us~. Keep up the good work, Queen!