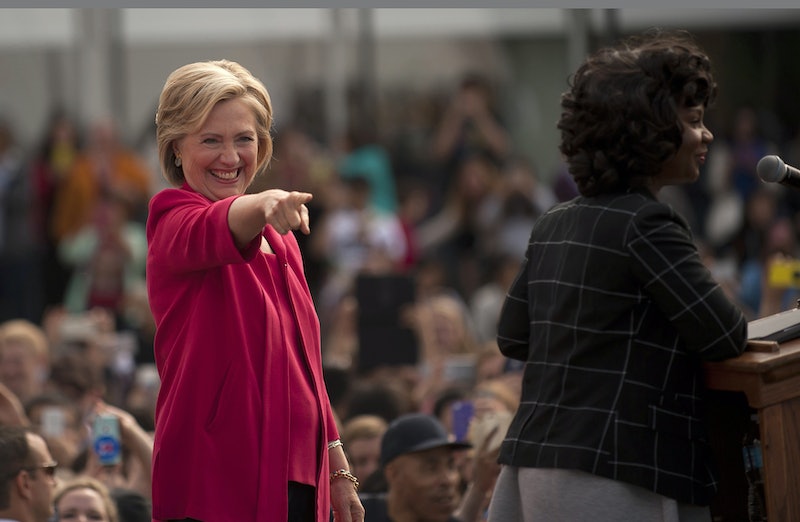 Hillary Clinton appeared on Wednesday evening's episode of The Tonight Show Starring Jimmy Fallon, and she wasn't afraid to open up about fellow 2016 presidential hopeful Vermont Sen. Bernie Sanders. He's a touchy subject for Clinton, since a CNN poll released Tuesday showed Sanders leading her by seven points in New Hampshire. While Clinton fared better than Sanders among New Hampshire Democrats, Sanders held 49 percent of Independents' support, compared with 26 percent for Clinton. But when Hillary Clinton discussed Bernie Sanders with Jimmy Fallon, she wasn't afraid to laugh about the pair's alleged rivalry.

In a sketch that came before Fallon's interview with Clinton on the show, the Democratic hopeful attempted to joke about her competition from Sanders. "Do you have any idea what it's like to work so hard for something, to be so close to getting it, but then have someone pop out of nowhere and tries to take it all away?" Clinton asked Fallon, in a clear reference to Sanders entering the race.

Discussion of their competition didn't last long, though — Fallon-as-Trump moved on to a joke about how Sanders is "losing his hair." Clinton didn't miss a beat, adding that "at least he doesn’t have just one strand that he swirls over his head like a soft-serve at Dairy Queen."

Clinton's appearance on The Tonight Show also comes just two days after a pro-Clinton super PAC, Correct the Record, circulated an email that criticized Sanders. The PAC compared Sanders to Jeremy Corbyn, the United Kingdom's Labour Party leader. Sanders supported a deal in which Hugo Chavez provided a fuel discount for Vermont, and Corbyn has praised Hugo Chavez in the past. (A spokesperson for Sanders, meanwhile, told The Huffington Post that the PAC is "distorting the record" about Sanders' politics.)

Sanders, for his part, said that Correct the Record's email is similar to actions taken by the Koch brothers. In an email to supporters Tuesday, Sanders said that the super PAC had presented "the kind of onslaught I expected to see from the Koch Brothers or Sheldon Adelson." Sanders went on to accuse Correct the Record of attempting to "stop the momentum of the political revolution we're building together."

Clinton's official campaign, meanwhile, has said that they have no plans to criticize Sanders. While several of Clinton's proxies have criticized the Vermont senator, Clinton hasn't spoken much about her opponent before her appearance on The Tonight Show. And while following the Donald Trump-Carly Fiorina feud is certainly a guilty pleasure, it's a bit relieving to know that not all of the 2016 presidential hopefuls are out to attack each other.