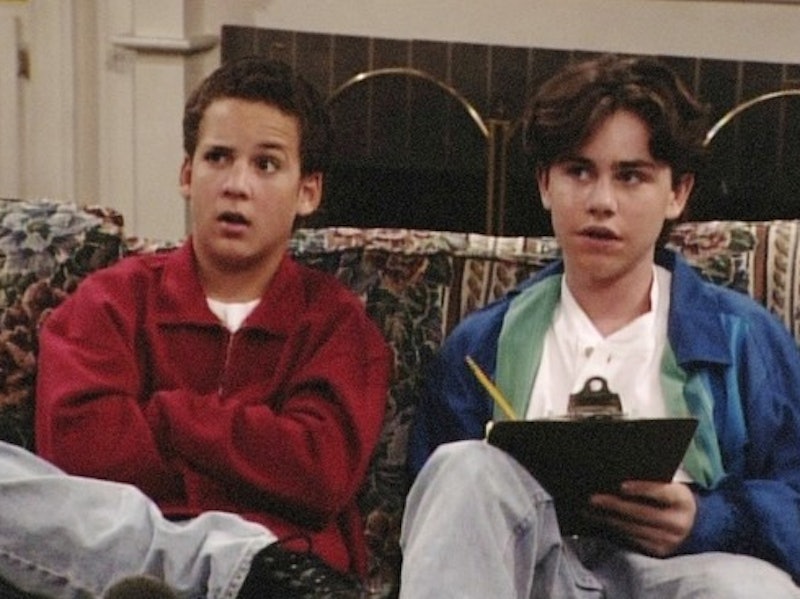 Boy Meets World: The title points to one "boy" in particular — the neurotic and lovable Cory Matthews — yet I think the spotlight ultimately belongs to his BFF. Some might argue that Cory was better than Shawn Hunter, but I disagree. Sure, Cory was relatable for his bouts of good-natured anxiety and his moral compass, but it was Shawn who truly captivated, inspired, and reached the hearts of viewers. At his core, Shawn was the quintessential "bad boy." He skipped school, rocked a leather jacket, and had altercations with authority. On the surface, he looks like the type of guy who can draw women in and allow them to think they can "fix" him — but Shawn was so much more than that.

From the start of the show, it was clear that Shawn's life was never easy. His mother was an unnamed stripper and his father was an alcoholic who left him. He grew up in a trailer park and had no really parental figures to guide him through adolescence. Boy Meets World might have centered around Cory's rocky voyage through the waters of growing up, but it was Shawn who faced the real challenge. He didn't have a stable home life, supportive parents or even a cool older brother like Eric Matthews. Cory's problems were often a result of his own making — or at least fairly average problems that he elevated. Shawn's were of a much greater scale and the fact that he got through them says so much about his character and his desire to persevere, even when things are really, really crappy.

One of Shawn's most admirable qualities was his confidence. Yes, his self-esteem was shaken at times, but Shawn had a charm and a nonchalance that's seriously admirable. While Cory highlighted the insecurities in all of us, it was Shawn who showed us that with a little bravery, we too can survive high school. Under the armor of his leather jacket, Shawn was the type of guy teenage boys want to be and the type of boyfriend teenage girls dream to have. It all came down to his seemingly effortless confidence.

In Season 1, Cory met his eventual wife, Topanga Lawrence. While it wasn't exactly clear yet that they were OTP, the couple were on and off for the rest of the series. In so many ways, Topanga represented the girl next store: Brainy, beautiful, and, yes, a little quirky. However, it took Shawn a long, long time to find a serious girlfriend. Many people dream of meeting a soulmate at a young age, but the reality is that it takes a lot of work and often we kiss a lot of frogs before finding the prince. Shawn's journey to Angela — and possibly beyond — reflects a realistic trajectory and the lessons he learned along the way are just as relatable to us.

At the end of the day, Boy Meets World comes back to Cory and his relationships. One of the strongest is undoubtedly his friendship with Shawn. For comedic and dramatic purposes, the two work well together because they're opposites. Cory is a ball of nervous energy, the type of person who seemingly the audience can relate to. Shawn is the outlier, the outsider, the fighter. Yet though their personalities differ, they're both wonderful friends to each other. Even when things get really tough for Shawn, there's evidence that he puts a lot of work into his relationship with Cory.

I would be remiss to not mention one of the most prominent traits of Shawn Hunter: The Hair. Yes, it's superficial, but any true Boy Meets World fan understands the breathtaking light reflected off those shiny locks every time Shawn ran his hand through them. If you were unaffected by The Hair, you need to go back and re-watch the entire series because it was basically a supporting character. Let's all take a moment to watch it in action:

You're welcome. Sorry, Cory, but no one can compare to these locks. Not even mid-'90s Topanga with crimped hair can hold a candle to the other-worldly quality of The Hair.

Cory will always hold a special place in my heart, being a character who shares so much in common with his audience. However, where Cory was relatable, Shawn was inspirational. Even when faced with tough circumstances, he managed to rise above, maintaining his sense of humor — and his perfectly coiffed hair.