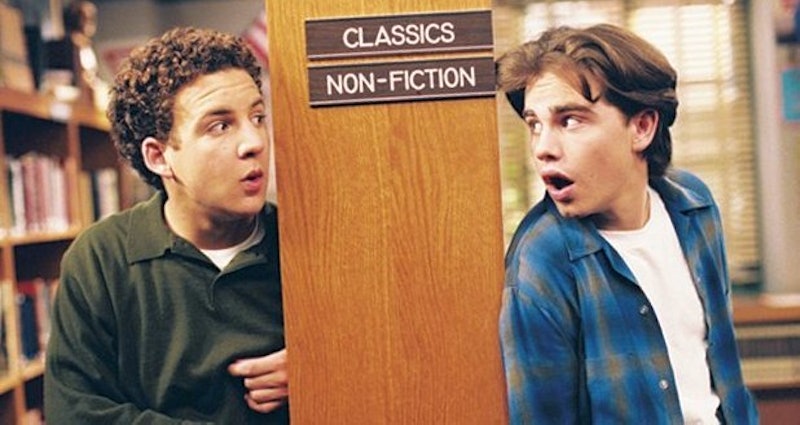 Remember how amazing Friday nights were when you were a kid, before there was the pressure of having to go out after a long week and stand around pretending to be apart of something social? Remember when it was just you and your couch and a paper plate full of pretzel twists? Remember when Fridays were all about relaxing and watching DJ and Steve or Cory and Topanga work through their painfully uncomplicated and short-lived relationship problems? (Oh, to be able to solve every personal issue in 23 minutes!) I have no doubts that you do, because ABC's TGIF lineup defined Friday nights for an entire generation — so much so that the shows you loved and the characters you rooted for defined who you were as an individual. One of those defining choices? Who you liked more on Boy Meets World: Cory or Shawn.

(And I say liked loosely, because were any of us really capable of romantic involvement beyond the Tiger Beat pages we tore out and hung on our walls?)

It was a big deal, really: Like, whether you had a crush on Cory or a crush on Shawn was a pretty significant dividing factor between adolescent girls everywhere. But, who was really the ultimate right choice? Personally, as much as I'll admit Shawn was the obvious crush choice (who doesn’t still feel a shiver down their spine when they hear/see the name Rider Strong mentioned?), I think we should all take the time to look back with a little bit more insight into ourselves and realize that Cory was totally better than Shawn in the long run.

Look, I get it. Shawn is and forever will be the brooding and troubled bad boy. With those luscious locks and broken family, he was basically the Ryan Atwood to Cory's Seth Cohen in The O.C. terms, or the Tim Riggins to Cory’s Matt Saracen in Friday Night Lights terms. Sure, you wanted to fawn all over him, hold his hand, and practice kissing with a poster of him — but did you actually want to date him? No, ladies. No, you did not.( Or if you did, you can probably admit it now: That would have been a nightmare.) As a character who was super into girls from the get-go, that relationship would have been more trouble than it was ever worth.

But Cory, on the other hand? Cory was steadfast and loyal and so wonderfully stable. And I realize that this is my adult self and adult priorities talking here — but isn’t that the point? Cory was responsible, loving, and cared deeply for his family. Like, remember that time he took the road trip with Eric to help build a stronger relationship between the two of them? Or, later, when he and Topanga decided to not elope so that their families could be involved in the wedding?

He was also clearly more reliable in relationships, and his love for Topanga was something to love about him, too. Slow and steady won that race — after all, it took Cory three seasons to ask her out! That’s like a lifetime in middle school time. But the devotion! Shawn doesn’t hold a candle to that kind of loyalty.

In addition to that, Cory was an awesome friend. Remember in Season 3 when Shawn made all of those blunders that seriously could have set him on the wrong track? It was Cory who helped save Shawn from himself. (If only he had been able to save him from those horrible leather jackets, too. Seriously, that’s reason enough to vote for Cory in this debate, in my opinion.)

So while Shawn may have had you swooning as a 12-year-old, I think we can all agree now that, looking back, it was Cory that should have won our hearts. Sweet and quirky and utterly adorable, he was totally the crush-worthy of the two.