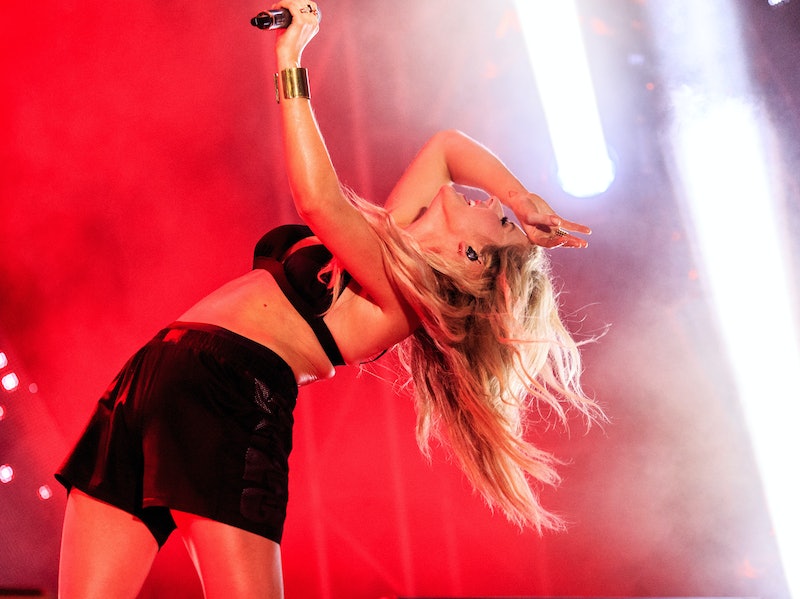 Hold on to your butts: Ellie Goulding's new single, "On My Mind," sounds absolutely massive. The 28-year-old British artist posted a preview of the track on Instagram on Tuesday morning, and I think it's safe to say we've found one of the first major hits of the fall. In the snippet, a snare drum rapidly builds to a stuttering climax. Then, after a brief moment of silence, a rolling breakbeat drops in and Goulding sings, "Boy, I got you on my mind!" From there, the song bursts into a flurry of frantic percussion and swirling synths. It sounds fantastic. Goulding has definitely left me wanting more! "On My Mind" premieres in full on Thurs., Sept. 17.

Goulding recently described her upcoming new album as "a big pop record" in an interview with Q Magazine, causing some fans to worry that she's "ditched" her signature sound. (To create her new LP, the singer enlisted the help of Max Martin, a renowned Swedish hit-maker whose style is much more "commercial" than her own.) Fortunately, I think the "On My Mind" snippet will assuage some of those fears. With its drum and bass influence and choppy vocal effects, the tune definitely still sounds like a Goulding joint to me. Check it out below.

On Tuesday afternoon, Goulding took over the iHeartRadio Twitter account in order to answer a few questions about her new material. It sounds as though her new album may be finished, and she hinted that its title will be revealed on Thursday. When asked why she chose "On My Mind" as the project's lead single, she replied: