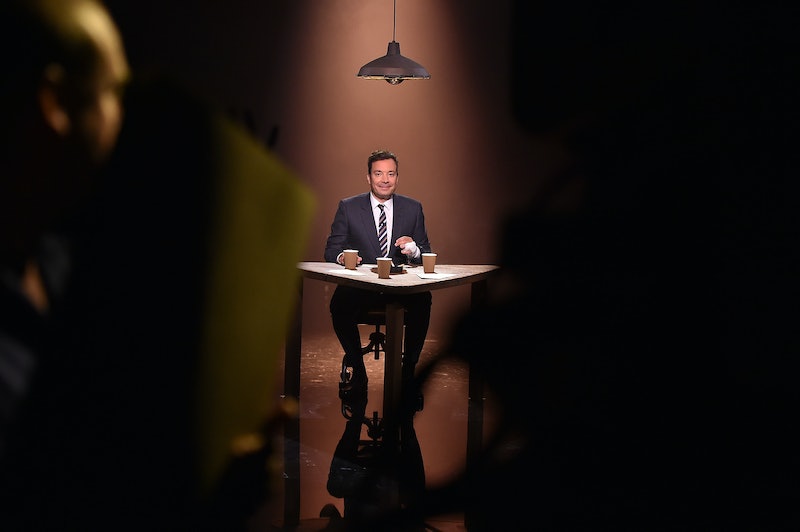 Jimmy Fallon is probably getting pretty excited for his upcoming interview with former Secretary of State / current presidential candidate Hillary Clinton, and for good reason. But let's not forget the time that Fallon told a sexist joke about Clinton, and it completely bombed. Hopefully, the Tonight Show host learned his lesson from that disastrous attempt at comedy, and will make sure to avoid similar avenues of thinking during Clinton's appearance on his show on Wednesday.

In April of 2014, Chelsea Clinton was pregnant, and Fallon decided that the potential gender of the newest Clinton was great material for a joke. “If it’s a girl, it will get some of Chelsea’s old hand-me-downs," Fallon said during his opening monologue. "And if it’s a boy, it will get some of Hillary’s.” In what was probably a new experience for Fallon, his audience was silent, save for a few boos.

At that point, most professional comedians of Fallon's level would have moved on, but he didn't. It apparently didn't occur to him that the joke was just bad, and he assumed that the crowd just didn't get the meat of the joke. “It’s a little pantsuit! It’s a little pantsuit," Fallon said. “It’s a little cream pantsuit.” Still met by silence, Fallon turned defensive. “It wasn’t that hard of a joke," he said. "What’s the big deal?”

It's not even that the joke was sexist — it's that it was just bad. Of course the audience understood he was making a pantsuit joke, insinuating that Clinton dressed like a man. But making fun of Clinton's love of pantsuits died out a while ago, and Fallon really missed the mark in delivering a stereotypically gendered joke to his relatively young audience.

In Fallon's defense, talking about Clinton's pantsuits in general isn't a hands-off topic. The candidate herself has poked fun at her deep love of the comfortable business attire, and sells a pantsuit-themed campaign shirt. When done well, a pantsuit joke could be funny. But not the way that Fallon delivered it.

Hopefully, the comedian — who has quickly established himself as one of the biggest names in the late night talk-show circuit — will keep his previous failure in mind when he interviews Clinton on Wednesday. There should be a lot of content to mine for comedy, what with the recent media circus involving Donald Trump, one of Clinton's adversaries, as well as the fact that the interview will take place during the second GOP primary debate.

If Fallon is smart, he'll have realized at some point during the past year that it's 2015, a woman is running for president, and making fun of her for being "masculine" isn't actually that fun. And as evidenced by his earlier crash and burn, it won't go over well with audiences either. Maybe if we're really lucky, Clinton herself will take the opportunity to explain to Fallon why his joke didn't go well. We can only hope.