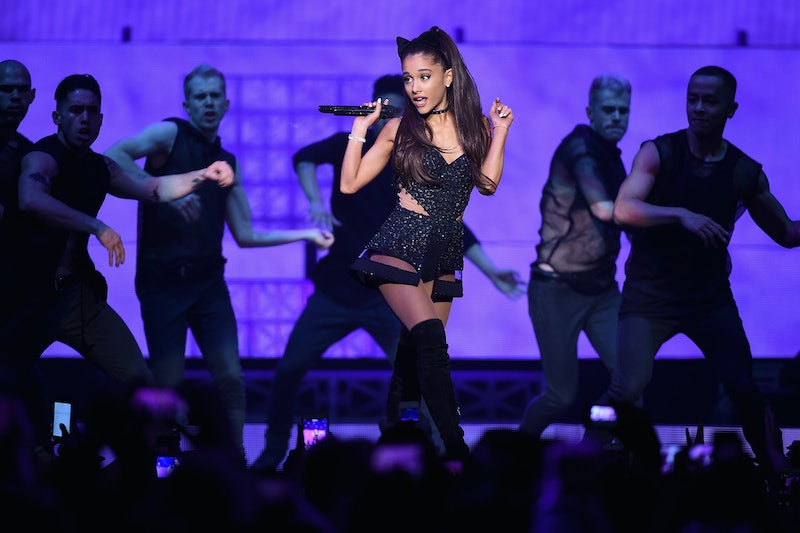 Put your thinking caps on, friends: Ariana Grande has a "big announcement" to make during her appearance on The Tonight Show Starring Jimmy Fallon on Tuesday evening. What could it be? That's an excellent question. Whatever it is, the 22-year-old pop superstar definitely wants to make sure her fans tune in, as she teased the upcoming surprise on both her Twitter and Instagram accounts. The way I see it, there are a few possibilities here. The first one that immediately comes to mind is that Grande will announce the "Focus On Me" release date. After all, she said on Good Morning America on Tuesday morning that she'd share more information about her new single "this week." I'll keep my fingers crossed. If the news isn't "Focus On Me"–related, it will hopefully still have something to do with Grande's new album, Moonlight .

However, as most music lovers know, pop stars are famous for hyping up supposedly "big announcements" that turn out to be not very exciting at all. Grande's highly anticipated reveal might have nothing to do with her music! It's tough to think about it, I know, but it's a reality we may have to face. Here are a few other things Grande could conceivably announce while chatting with Jimmy Fallon:

Scream Queens Is Going To Be AWESOME

Grande has a starring role on Scream Queens, Ryan Murphy's upcoming horror-comedy TV series. Perhaps she wants to take this opportunity to remind everyone of how awesome it's going to be? (I promise I'm not being a smart ass — I genuinely think Scream Queens looks entertaining. Though Murphy has a history of coming up with cool concepts and then not being able to sustain them, I bet the show will be a lot of fun to watch... at least at first.)

Grande stopped by Good Morning America on Tuesday morning to promote her new perfume... and also to apologize for DonutGate. Again. Clearly, her management team wants to make sure the American public knows she's really, really super-duper sorry about the whole thing! I wouldn't be shocked if she winds up apologizing AGAIN tonight. Yeesh.