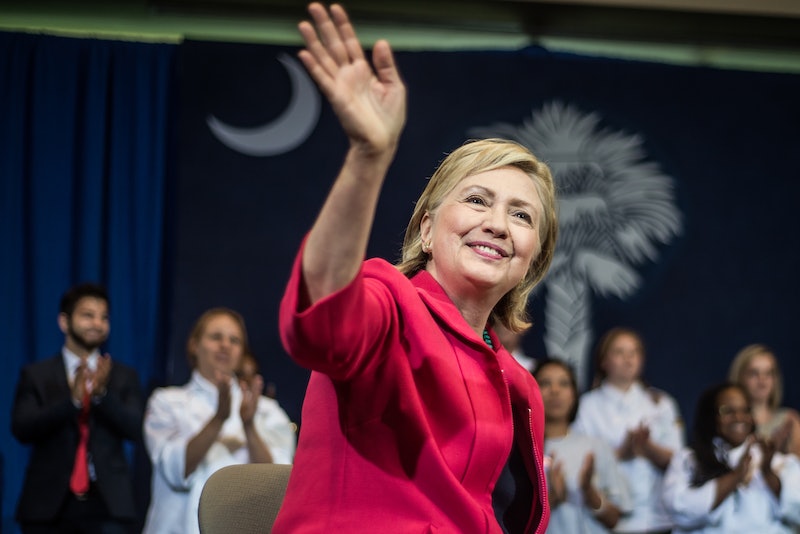 We've already seen Hillary Clinton nae nae her way into America's heart with her appearance on The Ellen DeGeneres Show on Sept. 8. Now, the leading 2016 Democratic presidential candidate will sit down Wednesday with late-night talk show host Jimmy Fallon, who surprisingly was a longtime registered Republican voter until recently. But there's another host who should get a shot at interviewing the Democrat: Stephen Colbert. In fact, there are several reasons why Hillary Clinton should be on Colbert, and his good looks and charm aren't part of it.

Last year, Fallon — who recently posed as Donald Trump to interview, well, Donald Trump — was met with some criticism when he made an off-putting joke about Clinton's pantsuits during his open monologue. Considering Fallon's track record with political guests on his show, don't expect his interview with Clinton to air on the side of controversy or criticism. In fact, Fallon has been known to poke fun at several politicians — specifically for his fat-shaming jokes towards New Jersey Gov. Chris Christie — but always over-delivers with his ability to bring some humor out of politics.

While lip sync battles and egg roulette would be fun to watch with political figures who vote on wars and publicly speak against gay marriage, comedy is the best form of political resistance. We need a late-night talk show host with an insurmountable experience with interviewing politicians, keeping them honest and in check, and has the track record of airing out the concerns of the American public. In other words, The Late Show With Stephen Colbert should be Hillary Clinton's next late-night TV appearance. Here are three reasons why.

Colbert Would Help Clinton Reach Out To The Black Community

It's no surprise the former secretary of state was met with tremendous amount of criticism from Black Twitter when she tried to whip and nae nae on Ellen. After all, Clinton doesn't have a great track record with race relations and police brutality. In August, several Black Lives Matter activists confronted Clinton to address several concerns they had with her role in implementing policies that negatively impacted the black community. Daunasia Yancey, founder of Black Lives Matter in Boston, called Clinton's record against anti-black violence "abysmal" in an NPR interview, citing her support for the War on Drugs in the 1990s. Though Clinton continuously showcased her past work in children advocacy, Yancey added:

That's where Colbert would come in. Within a week of his new late-night television program, Colbert made a powerful statement when he wore a Black Lives Matter wristband on air. Patrick Waldo, an activist who was at the audience that day, gave the wristband to Colbert. When speaking with the International Business Times, Waldo said:

For a TV personality as powerful and influential as Stephen Colbert to be put on the spot like that, asked to wear this bracelet for Black Lives Matter and then put it on and wear it for the entire show, it means so much.

This isn't the first time Colbert has spoken up about race-relations. In past segments, Colbert has repeatedly slammed the media for their portrayal of black Americans and even criticized Fox News' "willful ignorance" on race. Colbert can provide an opportunity for Clinton to mend her outreach to the black community by owning up to her past poor decisions on race relations. At least we know with Colbert, dancing isn’t usually a "thing" unless it’s the show’s final episode.

From Whitewater to Benghazi, and foreign donations to the Clinton Foundation and Emailgate, Clinton is no stranger to scandals. In fact, her involvement in these tolling scandals have cost her legitimacy in several swing states. According to a CNN poll, 55 percent of Americans living in a swing state have an "unfavorable" view of the Democratic candidate. There’s no doubt that Colbert would question her reputation with these past controversies.

In what was highly regarded as one of his best moments on television, Colbert didn’t shy away from asking tough questions to Vice President Joe Biden. When addressing the "donkey" in the room, Colbert outright asked about Biden's plans to throw his hat in the ring for the 2016 elections. While Biden said he had no answers for his possible run for president, his rawness drew the audience in even further — only something that can be done with an interviewer like Colbert.

Biden, who is still mourning the death of his adult son Beau to brain cancer on May 30, told Colbert that he wasn’t emotionally ready. Colbert, who isn’t a stranger to grief after losing his father and son in a fatal plane crash when he was ten years old, continued to ask more difficult questions to the Delaware native regarding Beau, creating one of the most authentic moments of Colbert's television career.

You Can't Fake Authenticity With Colbert

Recent polls are showing that Democratic presidential candidate Bernie Sanders is rising and has taken up the millennial market share that Clinton is losing out on. Spooked by this revelation, Clinton's campaign is launching a "charm offensive" to reach out to the hearts of many young Americans. Colbert, however, finds that off-putting.

While the late-night host performed as a conservative pundit for The Colbert Report, he made several legitimate criticisms against Clinton’s presidential campaign with his new program on CBS. He criticized Clinton's lack of authenticity and her aides formulaic strategy in showcasing "humor" and "heart," ironically, through television appearances.

"Experience does not matter to voters," Colbert said during his late-night show last Friday. "Yes, Ms. Clinton is clearly qualified for office, but to be elected is not enough. You have to appear genuine. If only there was some way we could get a glimpse into the private side of Hillary Clinton. I don't know — read her emails or something?" He then added another snub: "Way to show that trademark heart. And, yes, they will be having it trademarked."

But as Colbert has shown with his viral and touching interview with Biden, there’s no faking authenticity with Colbert. He'll be sure to ask the hard questions (erm, Hard Choices) that Clinton will be forced to answer with millions of people listening in. If Clinton truly wants to appear genuine and show her heart, going on Colbert is the only way to make that happen.