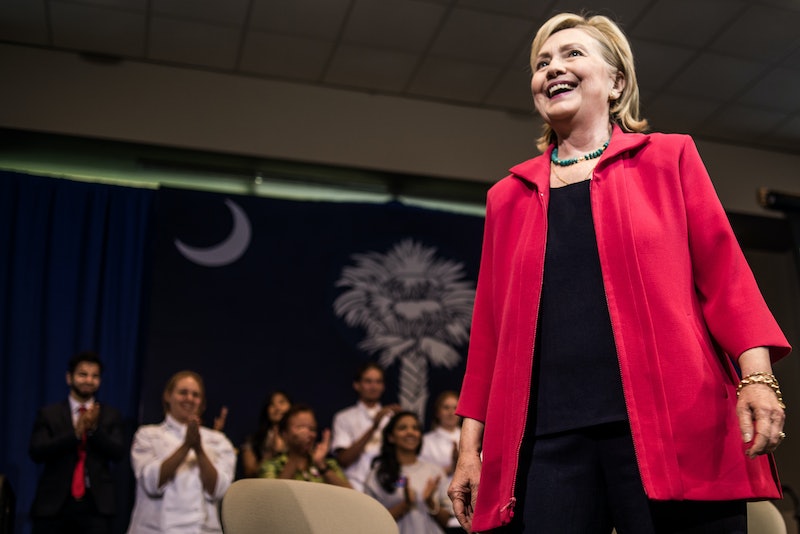 It's no secret that during her 2008 presidential campaign, Hillary Clinton was the focus of a maelstrom of sexist media coverage, and in that same run, Clinton was the butt of late-night jokes far more than any of her male counterparts. Almost eight years later, the political sphere is a very different place, but the importance of late-night talk shows is starting to become more and more apparent. In the past two weeks, these after-hours shows have played host to Jeb Bush, Vice President Joe Biden, and Donald Trump, and Clinton will soon be joining the ranks.

It may be concerning for Clinton, who doesn't have a great relationship with late-night television. In two separate studies conducted by the Center for Media and Public Affairs, a nonpartisan research organization that focuses on news and entertainment media, Clinton overwhelmingly came out ahead in terms of late-night jokes made at her behest compared to her male colleagues.

The first study, conducted in 2007, studied late-night shows from Jan. 1 to Oct. 10 of that year and found that Clinton was the butt of 186 jokes. In comparison, a then-Sen. Barack Obama — who had the second highest number of jokes — was only made fun of 56 times. What's even more troubling is the content of the comedy routines. The majority (43 jokes) focused on her lack of emotional warmth, while 29 of the jokes targeted her clothes and appearance. Even more humiliatingly, the remainder poked fun at her marital problems.

The study from 2007 offered up several examples of Clinton jokes, such as a Jay Leno line that said, "Over 18 million American men currently suffer from erectile dysfunction. Doctors say that number could double if Hillary gets elected."

And the jokes didn't stop there. A second study by CMPA focused on the 2008 primaries from Jan. 1 to July 31. During that time period, Clinton once again topped the chart in terms of jokes made at her expense. Clinton pulled in 562 jokes compared to Obama's 382 — even though she pulled out of the race during this time period. The worst offenders in 2008 were, unsurprisingly, Leno and David Letterman. Letterman made 131 jokes, while Leno managed to make fun of Clinton 204 times.

Being exposed to public ridicule is one of the side effects of running for office, something that all candidates are acutely aware of. But the disproportionate number of jokes focusing on Clinton, especially in conjunction with their sexist nature, are troubling.

Going into the 2016 election, Clinton has already had her fair share of teasing. With someone who has been around as long Clinton has, and who has been at the center of several presidential administrations and potential scandals, there's a lot of content to go off of. But a lot of the Clinton jokes need to be retired.

It's easy to go after a Clinton stereotype — like her appearance or her marriage — in order to get a cheap laugh. But it doesn't always pay off, as Fallon learned in 2014 when a pantsuit joke bombed. While discussing the gender of daughter Chelsea Clinton's new baby, Fallon said, “If it’s a girl, it will get some of Chelsea’s old hand-me-downs. And if it’s a boy, it will get some of Hillary’s." The joke flopped, with audience members actually booing Fallon while he tried to explain and defend the joke.

It's a new race; there's new material. There's no need to comedians to scrape the bottom of the Clinton barrel for decades old jokes. Luckily for Clinton, it's a new era of late-night television as well. Both Leno and Letterman are gone, replaced by Fallon and Stephen Colbert, respectively. And with these late-night changes come a new approach to political comedy. Hopefully, the two hosts will avoid walking in the sometimes cynical and often offensive shoes of their predecessors.

There is still hope these late-night hosts won't fall into predictable traps when handling Clinton and the election. Since taking over The Tonight Show, Fallon seems more interested in including politicians in his jokes rather than making them the targets. He allows his political guests to show lighter, funnier sides, like his "Slow Jam The News" segment, which has gone viral with guests such as Jeb Bush and Obama.

And though he is new to the Late Show desk, Colbert has already proven his abilities as a talented but fair interviewer. His interview with Biden has already become one of the most memorable late-night interviews and may indicate the future tone of the show — which would elevate it above the typical late-night fare.

Clinton's upcoming interview with Fallon is sure to be light and slim on content, but a success all the same. But what matters more than how Fallon interacts with the candidate is how he treats her when she's gone. Cheap Clinton jokes are appealing because they're easy, but they're not necessarily what the new late-night audience wants. Hopefully these hosts will be conscious and smart enough to avoid them.