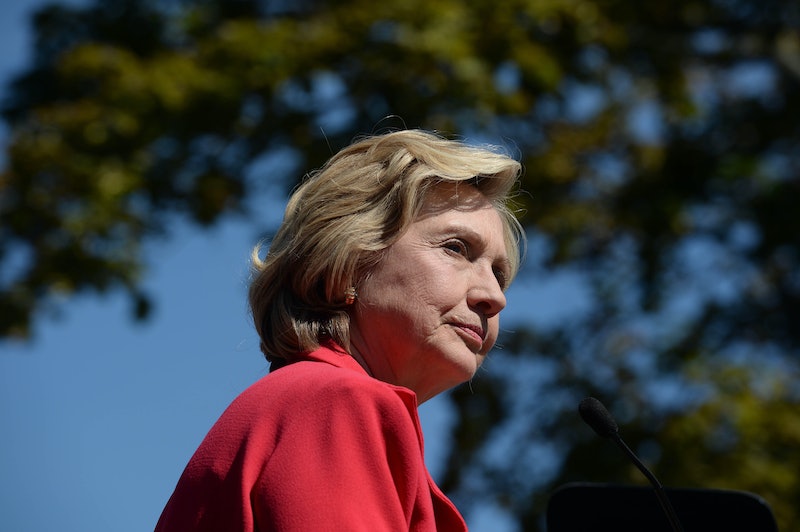 Hillary Clinton is no stranger to the evening television circuit. She's appeared on shows like The Tonight Show and The Colbert Report throughout her political career, but her last late-night appearance was in 2014 on The Daily Show, during which she flat-out refused to talk about her campaign. But even so, her talking points from that interview are remarkably similar to those now, in that both times, she had to answer for various controversies plaguing her political career.

Clinton tackled major issues in her interview with Jimmy Fallon on Wednesday, including immigration reform and the impending threat of rival Bernie Sanders. Clinton told Fallon:

Do you have any idea what it's like to work so hard for something, to be so close to getting it, but then have someone pop out of nowhere and tries to take it all away?

The memory of losing out on the Democratic nomination in 2008 must still loom large in Clinton's mind. Similarly, she further clarified her rationale behind using a private email server for confidential correspondences as well as personal emails. Clinton told Fallon:

I'm trying to be as transparent as possible but nothing that was sent at the time or received was secret this is all retroactive. Its a little hard to explain but some times different government agencies argue about what should or shouldn’t be what's called classified. It wasn’t at the time, and the stuff that's in it, I think its really boring people, which kind of hurts my feelings.

During her 2014 appearance on The Daily Show, Clinton had to clarify what she meant when she said that she and husband Bill were "dead broke" following the end of his second term. She told Jon Stewart that her statement an "inartful [sic] use of words." She also opened up about what's caused so many difficulties in the government, specifically the way in which two of its branches are failing:

If President Obama were here, he'd be the first to say it [the executive branch] has not kept up with the times. We don't have the kind of agility and flexibility and technology. The bureaucracy moves slowly, the Congress is gridlocked, so we have a crisis in our democracy. What I saw going through 112 countries is how important it is that we function in the United States because people look to us. Our system has been the beacon for so many years... That's why we need comprehensive immigration reform.

But given the more relaxed format of late-night interviews, Clinton had the opportunity to have some fun during both her late-night appearances. With Fallon, she didn't quite have to answer whether she enjoys a home office or a work commute, as she did during Stewart's aptitude test. But she was able to show a more relaxed, humorous side of her personality. This is perfectly in line with Clinton's last guest spot on The Tonight Show, when she defended Conan O'Brien in his semi-satirical feud with Newark, New Jersey Mayor Cory Booker. When given the opportunity, the Democratic presidential hopeful absolutely shines on a late night stage both as a candidate and as a comedienne.