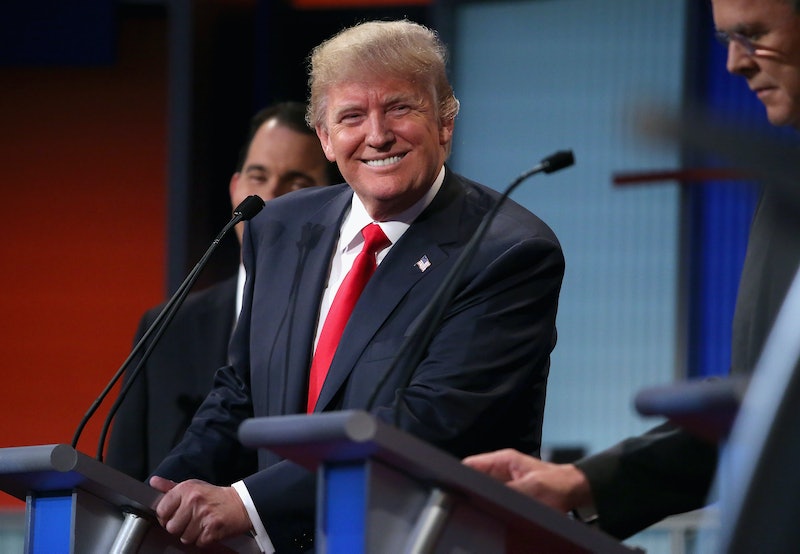 The second Republican presidential debate may be over, but it's left behind a trail of tweets that America can enjoy for days to come. That's all thanks to one man, who continues to prove time and again that he's a wellspring of fodder for other people's amusement (and sometimes horror). Thank you, Donald Trump. Thank you for being you. Your performance in the second debate on Wednesday was truly something to behold, and it certainly gave the Twitterverse much to talk about. Now, the rest of us can spend all day Thursday crying with laughter at all the tweets made about Donald Trump during the GOP debate. Even the staunchest Trump supporters can agree — these are pretty funny.

In some ways, the presidential debate is just like a sporting event. The candidates are individual players duking it out to knock each other down while scoring points for themselves. And just like any major sporting event, it's much more enjoyable with commentary. And that's exactly what Twitter gave us — flowing commentary on the players' every move.

However, there was one man who dominated the Twitter conversation, because for the majority of the match, all eyes were on him. After watching his memorable performance in the first debate, of which he was arguably the MVP, America wondered whether Trump could pull it off again, perhaps even outdo himself — or was his first debate just a fluke? Luckily for us, Trump has proven to be a consistent and dedicated crazy person. And his performance in the second debate easily rivals his first in WTF moments.

But even better than his antics were what people were saying about them. Here are 15 of the funniest tweets about Donald Trump during the second GOP debate.